Ships are propelled by propellers, revolving fan-like structures powered by the main engine. Using rotating motion, the transferred power is transformed into a thrust, which imparts momentum to the water and propels the ship ahead. Bernoulli’s principle and Newton’s third law are used to move a ship. When water is propelled in front of the blades, a pressure differential is generated between the front and backward sides of the blades. 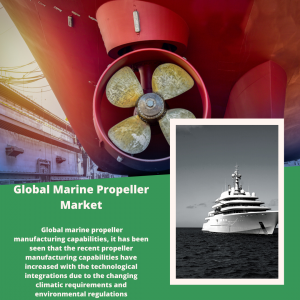 Corrosion-resistant materials are used in marine propellers because they are used in seawater, which accelerates the corrosion process. For maritime propellers, an alloy of aluminium and stainless steel is utilized as the material. Nickel, aluminium, and bronze alloys, which are 1015 percent lighter than other materials and have better strength, are also popular.

To build a propeller, a number of blades are attached to the hub or boss by welding or forging in one piece. Forged blades are more dependable and stronger than welded ones, although they are more costly. In order for a marine propeller to revolve through the water with a screw effect, it is made up of sections of helicoidal surfaces working together.

For propulsion, most boats, regardless of their kind and size, employ ship propellers. “Pushing” or “propelling” a ship forward has been around since ships themselves were invented. When big sails ruled the waves and powered the ship, propellers took over as the most common method of propulsion.

For surface ships and undersea vehicles, traditional marine propellers are still the most common propulsion system used in the industry today. How we evaluate and analyze propeller performance hasn’t altered much since basic propeller shapes were modified into water jet propulsors and alternate type thrusters on undersea vehicles

In recent years, countries in the Asia-Pacific area have become major manufacturers of goods. This region has a strong need for container ships due to a rise in exports of products. Asia Pacific is home to the majority of shipbuilding businesses, as well as propeller and propulsion system makers. This growing demand for marine propellers in Asia Pacific can be attributed to the increased demand for maritime transport services and expansion in the shipping sector in the area.

As a result of the intensity of emissions generated by hazardous gases such as SOx, NOx, and CO2, several environmental rules, policies, and subsidy schemes differ from nation to country. In 2005, for example, the International Maritime Organization (UK) published MARPOL Annex VI rules that established NOx emission limitations and enforced the use of fuels with low sulphur content. Ships and boats operating in US seas as well as within 200 nautical miles of the North American coast, which is also known as the North American Emission Control Area, are subject to these regulations (ECA). It’s important to note that marine propulsion systems must meet a variety of standards.

The Global Marine Propeller Market can be segmented into following categories for further analysis.

Considering the Global marine propeller manufacturing capabilities, it has been seen that the recent propeller manufacturing capabilities have increased with the technological integrations due to the changing climatic requirements and environmental regulations being brought into action. It has taken a performance and efficiency-based line of action towards better outreach in the market.

With the present Nickel Aluminium Bronze (NAB) submarine propellers, there are a variety of concerns including vibration and electronic signature, as well as possible excessive weight. One solution to all of these problems is to manufacture the propeller from composite materials, such as carbon fibre, in whole or in part. Even though composite propellers have been tested on the UK trimaran Triton and an RNlN mine hunter, which generally use a mix of composite propeller blades on a NAB hub

When a bronze propeller is in contact with the steel ship, it forms a corrosion circuit that contributes significantly to a vessel’s electronic signature. By the latest usage of the technology of composite propellers, this susceptibility may be greatly decreased or even eliminated. This could lead to a considerable reduction in the requirement for corrosion protection. Last but not least, a composite construction is frequently lighter than its metal counterpart in metal. This might result in increased draught or loading capacity, as well as reduced bearing loads. This would allow for thicker blade sections, which might result in better cavitation performance.

Global Marine propeller Market has been focusing upon the environmental protection that is currently one of the absolute top criteria in numerous countries around the world. Legal limitations, as well as rising public awareness, result in a growing interest on the part of watercraft owners in electric propulsion systems characterized by increasingly stringent “zero-emission” levels.

MAN Diesel and Turbo has recently brought into innovation and integration the possible technology to adhere to both the environmental regulations and propulsion-based emission reduction into the market technological implementations. It has brought upon the Fixed Pitch Propeller solution optimised propulsion efficiency, suppressed propeller noise and the robust reliability inherent with the design. It has been modified in a manner to production of  high-efficient aft ship integration options with rudder, rudder bulb, ducts etc.

Kawasaki has recently introduced the Controllable Pitch Propeller Design into complete effect. It has integrated this technology into the Hybrid Propulsion System developed as a product of efficient solution programs. When it comes to Kawasaki’s Hybrid Propulsion System, it’s a highly integrated propulsion system bundled with appealing Kawasaki marine machinery items such as engines, propellers, and more. Aside from that, the system’s motor generator, inverter, and energy storage module (ESM) are capable of converting propulsion and electric power in the opposite direction.