The relevance of vessel systems control is growing in the transportation industry. Swarming behaviour is the subject of research in domains such as marine or offshore systems, where many boats are involved. Improved flow management thanks to new sensors and networking will allow for more effective use of network resources. 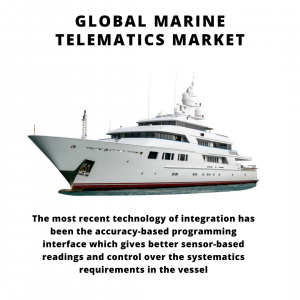 Transport via sea and air are vulnerable to a variety of hostile substitutes from the surrounding area, as well. Hydro-meteorological conditions fluctuate throughout time, according to these findings. As a result, it’s crucial to dissatisfy or disappoint these negative components. Fluid freight, such as oil, gas, and chemicals, complicates the issue of shipping by sea.

The most possible technological advantage has been the latest technical development in the field of automation, electronics, telecommunications, informatics, telematics, geomatics, and global position fixing techniques, achievement in maritime and offshore data storing, processing, analyzing, transferring and visualization should be taken into account and applied to the maritime and offshore systems.

In order to enhance operations, marine telematics systems are designed to record essential information about ships or ocean carriers and communicate that data via communications equipment. Ships are also monitored using this high-tech technology. Also, integration of automation in marine transportation and upsurge in the call for vessel safety and security has supplemented the growth in more than one way.

Increasing offshore oil and gas exploration and production in the Gulf of Mexico may have a positive effect on the growth of the market. The marine telematics industry is expected to grow slowly in Europe. As the world’s largest commodities trading centre, Asia Pacific is expected to see substantial growth in this industry. As the world’s fastest growing economies, China, and India, in particular, are expected to provide future development for the maritime sector.

Middle East is emerging as a vibrant maritime center for shipping, shipbuilding and repair, and offshore operations throughout the rest of the world. As a result of these advancements, the marine telematics industry is expected to grow.

Maritime and offshore industries are both being transformed by telematics. Marine telematics uses short-wave data communication architecture to coordinate emergency response and assistance, surveillance of systems, internet access and vessel stakeout among other things in the maritime industry There is a user’s edge, satellite aerial and communication string, or loop with the craft’s electrical knots in most of these systems. A satellite joint is then distributed to the outside world when other communications fail.

The Global Marine Telematics Market can be segmented into following categories for further analysis.

Considering the Global Telematics improvement and high-end requirements, The systems offer emergency alerts, full and comprehensive messages, including facts and figures of GPS position and other vital strictures, between the vessel and the concerned maritime rescue coordination edge. This data is aimed at helping rescue agencies with locating a craft and responding properly in the course of an emergency. It has taken a performance and efficiency-based line of action towards better outreach in the market.

The most recent technology of integration has been the accuracy-based programming interface which gives better sensor-based readings and control over the systematics requirements in the vessel. E Navigation and Fixed positioning has been part of the major requirements in the field of telematics integration across the global scenario of vessel operations. Electronic position-fixing systems, which could be integrated into e-Navigation, can  be divided into Global Navigation Satellite Systems (GNSS), GNSS augmentations, terrestrial radio-navigation systems, and non-radio positioning systems.

The most recent approach has been through the framework-based optimisation to form a possible linked interconnectivity. As far as maritime traffic information is concerned, a Regional Area Network (RAN) of interconnected ports is defined by a wide coverage of many such LANs by connecting local vessel traffic services (VTS) centres into a regional Vessel Traffic Management and Information System (VTMIS), with interests mainly in shipping safety support, own port berths management, coastal sea pollution, and other maritime-related issues of concern.

Global Marine Telematics Market has been focusing upon the efficiency-based operations wherein the industries  are currently one of the absolute top criteria in numerous countries around the world. Legal limitations, as well as rising public awareness, result in a growing interest on the part of watercraft owners in electric propulsion systems characterized by increasingly stringent “zero-emission” levels.

Sentinel Telematics has also been integrating itself into the Component requirements as per the industrial revolution for data and data analysis. The Sentinel Telematics system breaks down into hardware and software components. Hardware must be installed on the boat (during production or retrofitted) since it is required for data acquisition, processing, and communication with the software components like the Platform and APIs. It has been integrated with the Boat Monitor BM 40. It can be further extended with wireless Sentinel HUBs and Sentinel Battery Sensors and works with additional devices like shunts, temperature sensors, alarm buttons and other on-board equipment.