Helicopters are a distinguished class of light aircrafts with vertical take-off/landing and flexible hovering capabilities. Historically, the aerial warfare was not a primitive policy of combat unlike its noted counterparts, the infantry and navy. 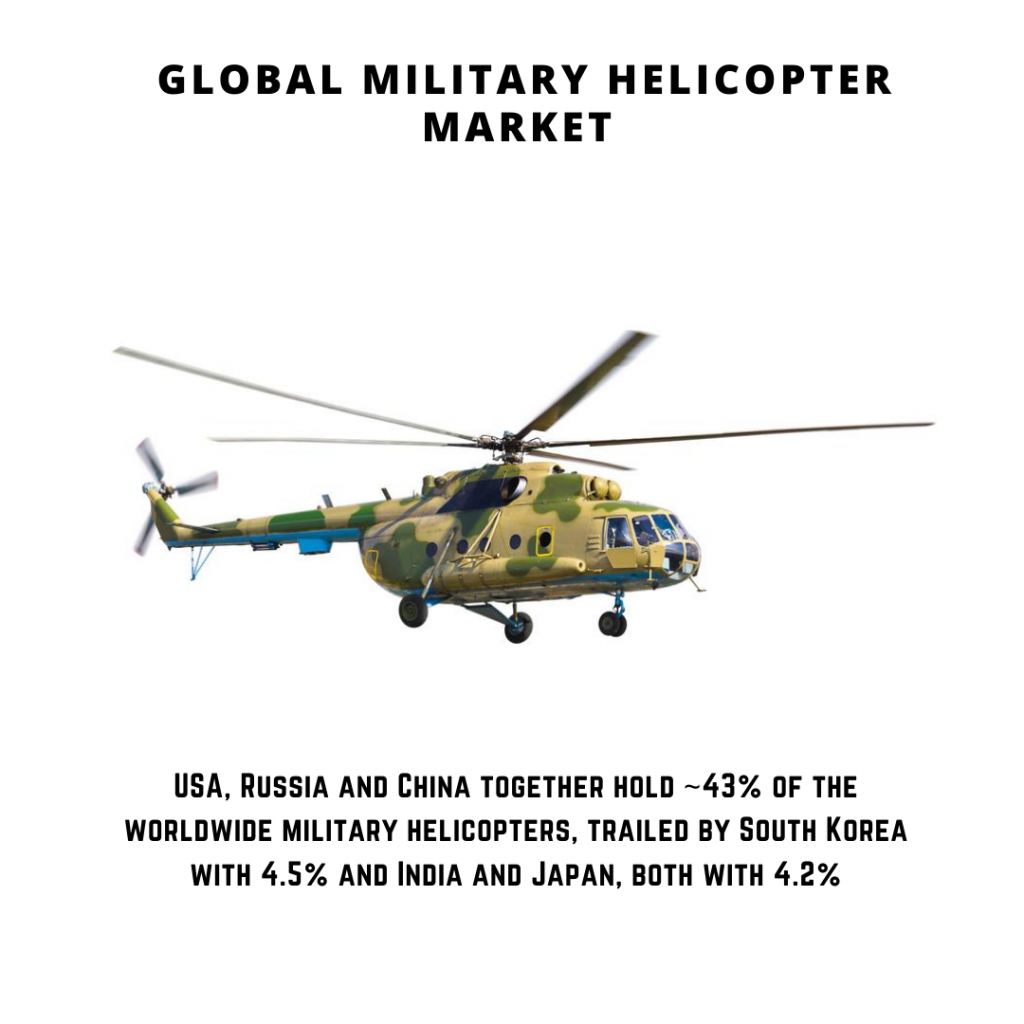 With the dawn of 20th century, aviation assumed only an assistive role in military reconnaissance. But with the outbreak of World War II when military aircrafts had to heavily reprise offensive duties with the army, there grew a strong need for a comparatively lighter and compact aircraft with a characteristic ease in its manueverability, which could aid in surveillance and rescue operations, primarily at the battle front and the glories for pioneering this “automobile of the future” is widely credited to Igor Sikorsky of United States.

THE EVOLUTION OF MILITARY HELICOPTER MARKET

As likely as it implied in transforming apes to men, evolution has constantly redefined the needs in terms of functionality of a mere rotorcraft into a modern-day military helicopter.

It started from the world war during the early 1940’s which witnessed Sikorsky’s XR-4 being inducted into the US armed forces to aid in rescue operations and in 2020, we have Boeing’s AH-64E Apache the most advanced military attack helicopter today. Diversified use of Military helicopters, have come to the fore from the mid-20th century.

Helicopters are now specifically designed to participate in strategic attacks, to undertake transport/support roles to mobilize resources, to perform search and rescue mission of personnel, and also in surveillance activities.

Spike in demand for attack and transport helicopters

The prevalence of an agitated relation between several nations around the globe, due to territorial disputes, especially in the Asiatic region with countries such as China, India, Pakistan and Bangladesh. Political conflicts in the middle-east involving Syria and Iraq have aggravated tensions, also the nuclear armament threat posed by North Korea has alarmed its neighbours who share lateral aggression. This perception of threat has prompted countries to induct the modern warfare equipment into its armed forces.

Adaptability is the key

At this time when the global community is firmly in the grips of a malicious pandemic, and nations around the world are battling a serious economic downfall, the defence sectors of majority of the countries will, by all means be deprived of additional budgetary allocation to invest in advanced warfare technologies.

USA, Russia and China together hold ~43% of the worldwide military helicopters, trailed by South Korea with 4.5% and India and Japan, both with 4.2%. Despite the fact that France is the nation to have battled most wars, it is ranked in the eighth position in this rundown. Interest for military helicopters isn’t confined to wars, but also for different reasons, for example, transportation of work force, perception, preparing and salvage etc.

The “Sikorsky CH-53K King Stallion” is the most expensive in the market and is a substantial lift payload helicopter. Substantial helicopters can be utilized for different purposes and can convey enormous weight. The interest for light weighted choppers is the key factor which is driving the market presently.

The attack helicopters are the most expensive of all, for instance, the “Boeing AH-64 Apache” is evaluated at $31 Million and “Sikorsky Sea Hawk” at $43 Million.

Transport helicopters are one of the bigger helicopters and are intended to convey heavier burdens including light vehicles, enormous gatherings of troops, and consignment into battle conditions.

The need of clinical and emergency rescue administrations has expanded worldwide because of the global pandemic hitting the countries just as the natural disasters happening successively all through the globe. This legitimately impacts the need of military helicopters in each country.

The remaining piece of the overall industry is held via Search and Rescue, Reconnaissance and perception and preparing helicopters.