Night Vision Devices (NVD) allows its user to see in darkness so that the user can get more familiar with its surroundings, the application of NVD is typically in Defense personnel and law enforcement agencies. The technology was introduced during World War II and widely used in the Vietnam War. Also named as Night Vision goggles (NVG) or Night Optical/observation Device (NOD). 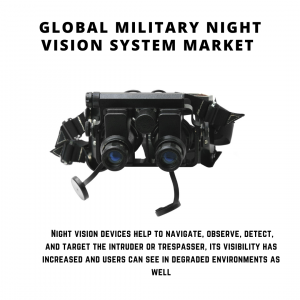 Now the night vision system is also available for automobiles for better view. The application of Night vision devices is continuously increasing day by day as it is mainly driven by the military and defense industry.

These devices have attracted the popularity among wildfire researchers which may increase the demand. Companies like MKU, BAE Systems, PLC, Thales, Elibit System, etc. have been a contractor of defense industry for countries that have contributed a lot in their development.

The developing and developed countries are spending the huge percentage of their GDP for the growth of their Military power and due to this the technological advance is also taking place at faster pace since the allocated budget is also used for research purposes.

The surveillance and gathering information for enemy territory has become the most important task for countries, to decrease the number of casualties as well; the mission takes place in the night. The UAVs, etc. are equipped with the Night vision devices to take the video as well as image of their enemy territory.

Countries who have good relationships with other countries are tying with them so as to develop a better NVD using shared technology which overall decreases the cost of their investment. Some time ago the NVDs were only used by special forces due to their high cost but as technology developed the different countries are announcing to equip their local police with these devices as well.

COVID has affected the livelihood of every human being on earth. It has affected the day to day task as well, the sudden lockdown initiated all around the world has triggered and affected the companies, production, work, research, transportation, sales, distributions, etc.

The Global Military Night vision system market is estimated to be US $ XX Billion in 2020 and expected to grow at a CAGR of XX% by 2026.

Instead of concentrating the distribution of special equipment like NVD to a small part of military personnel’s, the countries and state police have started giving to normal military personnel as well so that the police persons can be fully equipped for any type of situation and they do not have to wait for a special squad to come.

With the increase in terrorist activities this is a fair step taken by the government. Now Night vision devices also help to navigate, observe, detect, and target the intruder or trespasser, its visibility has increased and users can see in degraded environments as well.

In some countries owing Night vision devices is illegal for the civilian and only military personnel can hold such devices. Startups in this sector are a little bit difficult because of high capital investment as the strict government rules and standards to qualify the manufactured devices.

Recently Thales group has partnered with the MKU an Indian based defense industry announced the co-development of ELFIE Night Vision Device for the military personnel of India and across the world. L3 Harris communications has introduced the Ground Panoramic Night Vision Goggle (GPNVGs), it has the capability of augmented reality and wireless connection comes with 4 different image intensification.

The underdeveloped and some developing countries are having less concentration toward this technology segment and depending on other countries to buy the finished product directly shows that the potential of money flow is higher. The technological development of Artificial Intelligence and machine learning has a wide range of applications, this can be considered an advantage for development of Night vision technology. The AI technology can be integrated with Night Vision output to evaluate and find the potential threat and can give the probability of target.