Eye protection is protective equipment for the eyes and, in certain cases, the face that is meant to decrease the risk of harm. Examples of dangers that necessitate eye protection include particle or debris impact, light or radiation, wind blast, heat, sea spray, or collision. Ballistic-rated eye protection is becoming a standard feature of today’s military forces. In reality, the usage of tactical eyewear has spread to a wide range of non-military uses. 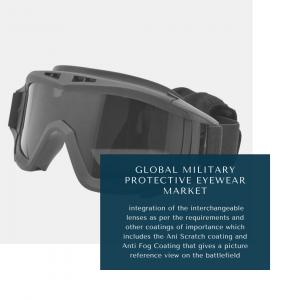 Ballistic and tactical eyewear is intended to give additional impact protection in hostile military situations such as the Middle East, which is known for its extreme heat and frequent dust storms. It does so to military-grade standards, which are far superior to those found in industrial-rated safety eye protection. Military Safety Glasses are designed to save eyes and possibly life in extreme environments. The potential for high-velocity impacts from flying debris and shrapnel requires the use of protective eyewear that meets or exceeds Military Ballistic Standards for eyewear.

Eyesight is a critical factor that enables us to successfully perform mission tasks during deployments, training, or maintenance. Despite accounting for less than 1% of the body’s surface area, our eyes are disproportionately damaged when left uncovered. Something as basic as sand blowing in your eyes might momentarily knock you out of the battle, but shrapnel from IEDs and other explosion impacts to the eyes can render you combat ineffective for a far longer period of time and leave you blinded for life.

Many War fighters are unaware that the risk of an eye injury does not cease when they leave their deployment or training location. Many ordinary military duties, such as grounds keeping, maintenance, and shop labour, all pose a high risk of eye damage. These actions take place both at work and at home.

The most requirement of military protective eyewear is seen amongst the Air crew operations considering their high-altitude pressurised requirements. These changes are marked within the market to have better development perspective at varied requirements. The most complex airframe is the Integrated Helmet and Display Sighting System (IHADSS), which features an image collimator or helmet display unit (HDU) located above the right eye.

There has been varied levels of compliance and proper rating required by the armed forces to comply for the regulations stipulated. Protective eyewear for US military personnel must carry the APEL (Authorized Protective Eyewear List) emblem or be listed as per the US APEL Website. This is the single most effective technique to determine whether your eyewear is allowed for official military usage.

The contingents of operations under the military insists that personnel only wear APEL approved eye protection. This is not to just have another regulation. Instead, it is because there is a significant need for a protection standard beyond what typically works for the civilian population. As a market-based development and testing requirements, The American National Standards Institute (ANSI) tests projectiles at 150 feet per second (feet per second). While the military mandates projectile testing at 650 (+/- 10) fps for glasses and 550 fps for goggles.

The Global Military Protective Eyewear Market can be segmented into following categories for further analysis.

Military Protective Eyewear has been playing a major role in placing a proper requirement in place in terms of battlefield compatibility. It has been one of the most required equipment in place for better compliance and protection from varied levels of threats posed by the explosion and the battlefield environment of operations.

There has been recent technological advancement in terms of its complete integration levels into single piece equipment of usage. There has been usage of optically corrected 2.4mm thick polycarbonate lenses for use in any light conditions. The system also includes a rugged pouch with lens pockets, a neck leash, and an anti-fog cloth. The corrective lens carrier (EPPRSC-P) can also be used with other protective gear requirements. The presence of extra-thick polycarbonate lenses are easily interchangeable for rapid adaptability to your surroundings. Its low-drag, high-speed frame and shatterproof lenses make it comfortable and cool enough for downtime while being practical and robust enough for the battlefield.

There has been considerable technology being implemented in integration of the interchangeable lenses as per the requirements and other coatings of importance which includes the Ani Scratch coating and Anti Fog Coating that gives a picture reference view on the battlefield considering the rugged environment of operations of flying debris and continuous dust.

The Protective eyewear stands to be of major importance in the market developments and as well as the operational perspectives of military requirements. There has been a greater requirement of having the protective eyewear in terms of large scale multi variation-based battlefields being noticed in the present scenario.

The most recent introduction has been the new technological advancement in goggles for safety used and produced by the Revision Military. Snowhawk has been the most recent technological advancements in the military protective eyewear requirements. It is a completely integrated, full-coverage ballistic goggle and balaclava system with industry-leading anti-fog performance and breathability for operations in the harshest and coldest situations. It has been placed with a thermal gasket lens and has an insulated barrier between panes to keep the cold exterior from infiltrating.

It was designed to meet or exceed the most severe US and international ballistic impact criteria for use in military and tactical operations. Interchangeable, optical grade polycarbonate lenses guard eyes from unexpected fragments, give 100 percent UV-A, B, and C ray protection, and assure distortion-free vision for optimal performance.

The Eye Safety Systems ( ESS ) has also been involved in integrating new innovations through the mark of requirement towards better protective wear bonding for the armed forces battlefield environment. It has developed a ClearZone FC Bond™ coating that keeps the lens fog-free under strenuous conditions, and the conforming frame has a smooth interface that face painters can keep clean. It has developed variants of importance specific to the modules of operations which are the ESS Land Ops, ESS Flight Deck and ESS Vehicle Ops. They differ upon the impact resistance and stealth assistance required for each personnel as per the environment of operations.