In the wake of several border tension issues and complex political agendas around the world, Military tanks have become the necessity in today’s world. Countries are pouring down investments into the procurements of newer generation battle tanks to replace old ones. 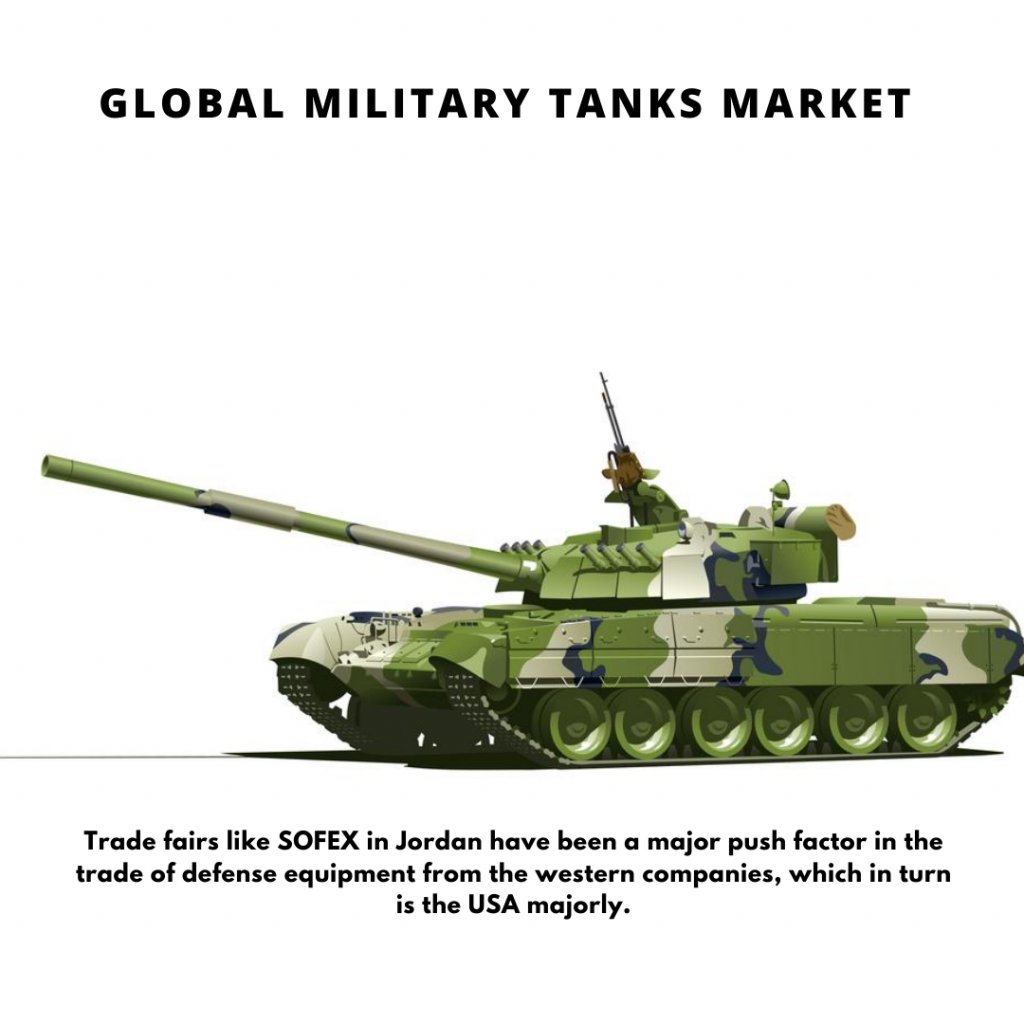 The market is however concentrated on both sides with a few producers and buyers fulfilling and creating a major part of the total demand respectively.

General Dynamics Corporation, BAE Systems plc, Rheinmetall AG, Textron Inc.are some of the major players in the market. However, the domestic producers are also building third or fourth generation tanks.

The market is currently driven by the increasing procurements of tanks by various countries, like U.S., Hungary, Russia, Thailand, France, and Germany, among others. The demand is expected to be high, especially from these countries during the forecast period.

Unlike most countries which are focusing on the procurement of other types of armoured vehicles excluding the battle tanks, countries in Europe are focusing on the procurement of new battle tanks and the modernization of their existing military tanks fleet. Countries in the region, like France and Germany are collaborating together to produce the next generation military tanks. Also, Russia is adding thousands of military tanks to its fleet inventory.

Out of approximately 73,000 battle tanks in the world, the top ten countries owning the maximum MBTs own more than 60% of the total. With Russia on the top with over 15 % ownership, followed by the USA, China, India, Egypt, North Korea, South Korea, Pakistan Turkey, and Ukraine respectively. But numbers alone can’t tell about the strength, some countries out of the whole have more modern MBTs than the rest. 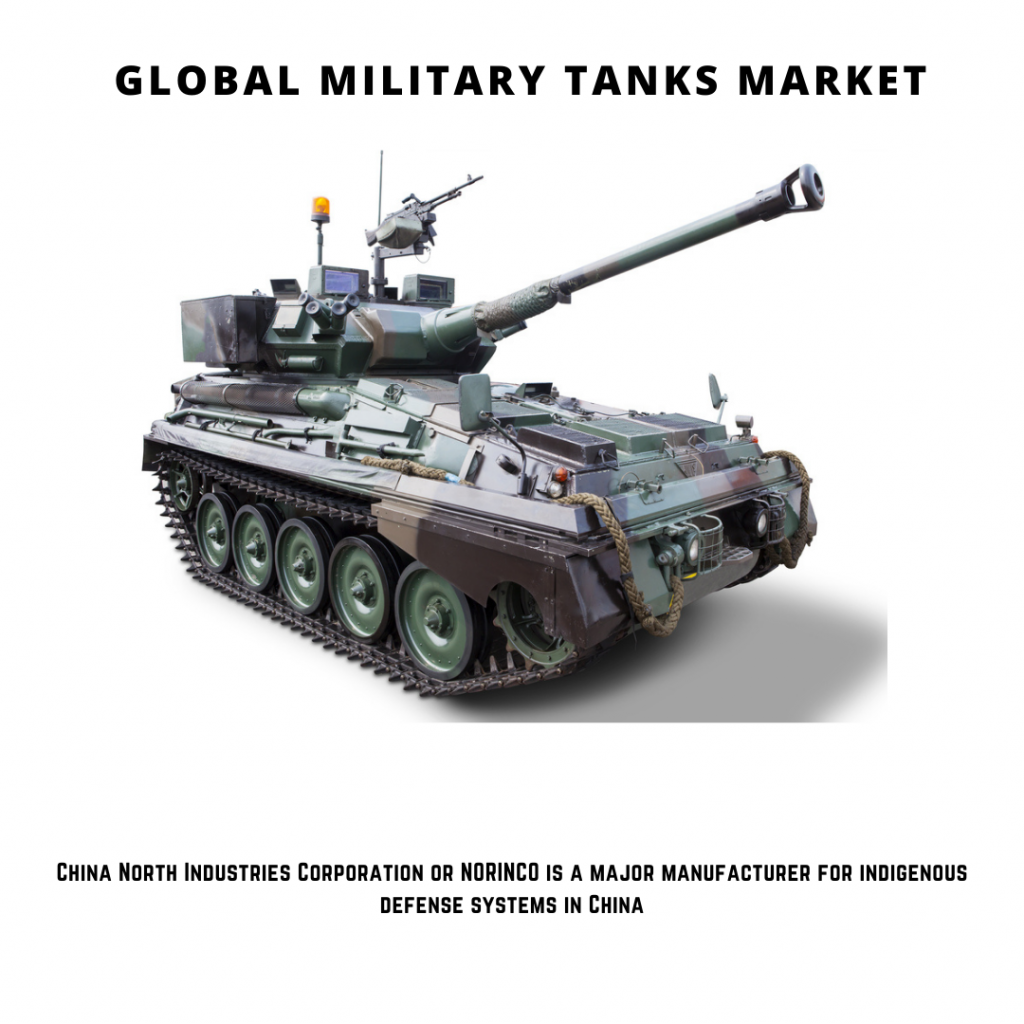 The American military tanks market constitutes approximately a quarter of the global ground vehicles. The suppliers in the USA are heavily concentrated out of which General Dynamics, BAE Systems, Iveco defense systems constitute more than three-quarters of the total supply of America. Canada has a similar situation. Other countries like Brazil, Mexico, Chile, and Columbia rely heavily on imports.

Battle tanks and the modernization of their existing MBT fleet. Countries in the region, like France and Germany, are collaborating to produce the next generation MBTs. The demand is expected to be generated from the countries, like the United Kingdom, Italy, Finland, France, Germany, Croatia, Poland, Sweden, and Turkey, in the years to come. All these factors are expected to help the growth of the market in the region during the forecast period.

Such partnerships may help to boost the growth of the revenues of the players.

This region accounted for the highest market share in the last year. Countries like China and India are the major forces behind this increasing demand of the Asia-pacific region. Both the countries are importing heavily along with the growth of domestic suppliers. China North Industries Corporation or NORINCO is a major manufacturer for indigenous defense systems in China with its latest shipments of VT-4 tanks to countries like Pakistan and Nigeria.

India, on the other hand, is set to replace their T-72 MBTs with FRCVs. Growing cross border tensions with neighbors like Pakistan and China will also drive up the demand of the region. With major companies like DRDO and Ashok Leyland, delivering the third or fourth generation of older tanks.

In the middle east, the major spendings are on upgrading the major the MBTs. Countries like Israel are upgrading their fleets to new modern warfare systems, UAE is Buying APCs from its local manufacturing unit of Emirates defense technology. The increase in conflicts in Libya, Yemen, the Sinai, and Somalia has expanded the demand of the region at a rapid pace. The internal instabilities and cross-border conflicts in the region is a major opportunity for defense companies.

Also, Trade fairs like SOFEX in Jordan have been a major push factor in the trade of defense equipment from the western companies, which in turn is the USA majorly.

Jan 2021- Elbit Systems has won a contract valued nearly $172M to supply light tanks to the Army of a country in Asia-Pacific.

Jan 2021- BAE Systems has signed an extensive mid-life upgrade contract worth more than $500M with the Dutch Defence Materiel Organization (DMO) for the Royal Netherlands Army’s fleet of 122 CV90s, with an option for an additional 19 vehicles.

Dec 2020- U.S. Army awarded Honeywell a contract valued $1.1B for 1500 engines that will power their M1 Abrams series of tanks.

The Main Battle Tank market is expected to grow with a CAGR of over XX% during the forecast period (2020-2025).

Procurements of Military tanks are expected to be high during the forecast period, as their necessity to the ground forces is becoming significantly more, in the wake of several border-related issues and other hostile activities involving the armies as well as political agenda around the world.

General Dynamics Corporation, BAE Systems plc, Rheinmetall AG, Textron Inc.are some of the major players in the market. However, the domestic producers are also building third or fourth generation tanks.

The Indian Army today flagged off the 100th K-9 Vajra-T self-propelled artillery gun built by India in cooperation with South Korea. L&T had in 2017 won the~$600M contract from the Ministry of Defence to supply 100 units of K9 Vajra-T 155 mm/52 calibre tracked self-propelled gun systems to the Indian Army under the Indian government’s “Make in India” initiative.

Russia’s Rosoboronexport unveiled the upgraded version of Armata tank at IDEX-21. The latest T-14 Armata tanks is fitted with new unmanned turret with a 152mm cannon (it currently has a 125mm gun), supersonic sub-calibre armour-piercing projectiles, fuel air explosive munitions, missiles based on the ‘fire and forget and fire again.

The Chinese People’s Liberation Army (PLA) Xinjiang Military Command recently commissioned new Type 15 lightweight main battle tanks. Type 15 tank has a max speed of 70kmph and range of over 400km. It weighs between 33-36 tons depending on the armor package. It is armed with 105mm rifled gun with thermal sleeve and fume extractor, 40mm automatic grenade launcher and a 12.7mm machine gun.

Israel Aerospace Industries (IAI) has completed delivery of hundreds of WindGuard radar systems to the U.S. Army for integration onto their Abrams tanks. The WindGuard (ELM-2133) radar systems were supplied to DRS Land Systems.

Leonardo and Rafael have completed the delivery of Trophy Active Protection Systems (APS) ordered by the U.S. Army for installation on Abrams main battle tanks.

The U.S. Army is assessing the next generation “Trophy VPS,” a smaller, lighter, equally-capable variant of Trophy that will provide protection to a broader range of U.S. ground combat vehicles.

Russia’s Sprut-SDM1 light amphibious tank has passed tests in the sea and in subtropics. The tank will be used by airborne troops. It is built by specialists from the Volgograd machine-building company VgTZ and Kurganmashzavod, which are part of the Rostec’s High-Precision Complexes holding.