Military trucks are a key components of the country’s safeguarding fleet, whether to relocate personnel or to move tons of payloads to rare places. From fighting vehicles to personnel carrier vehicles, tactical tanks to battle tanks, support vehicle to heavy combat vehicles in different shapes and sizes with customization options are available in the market. 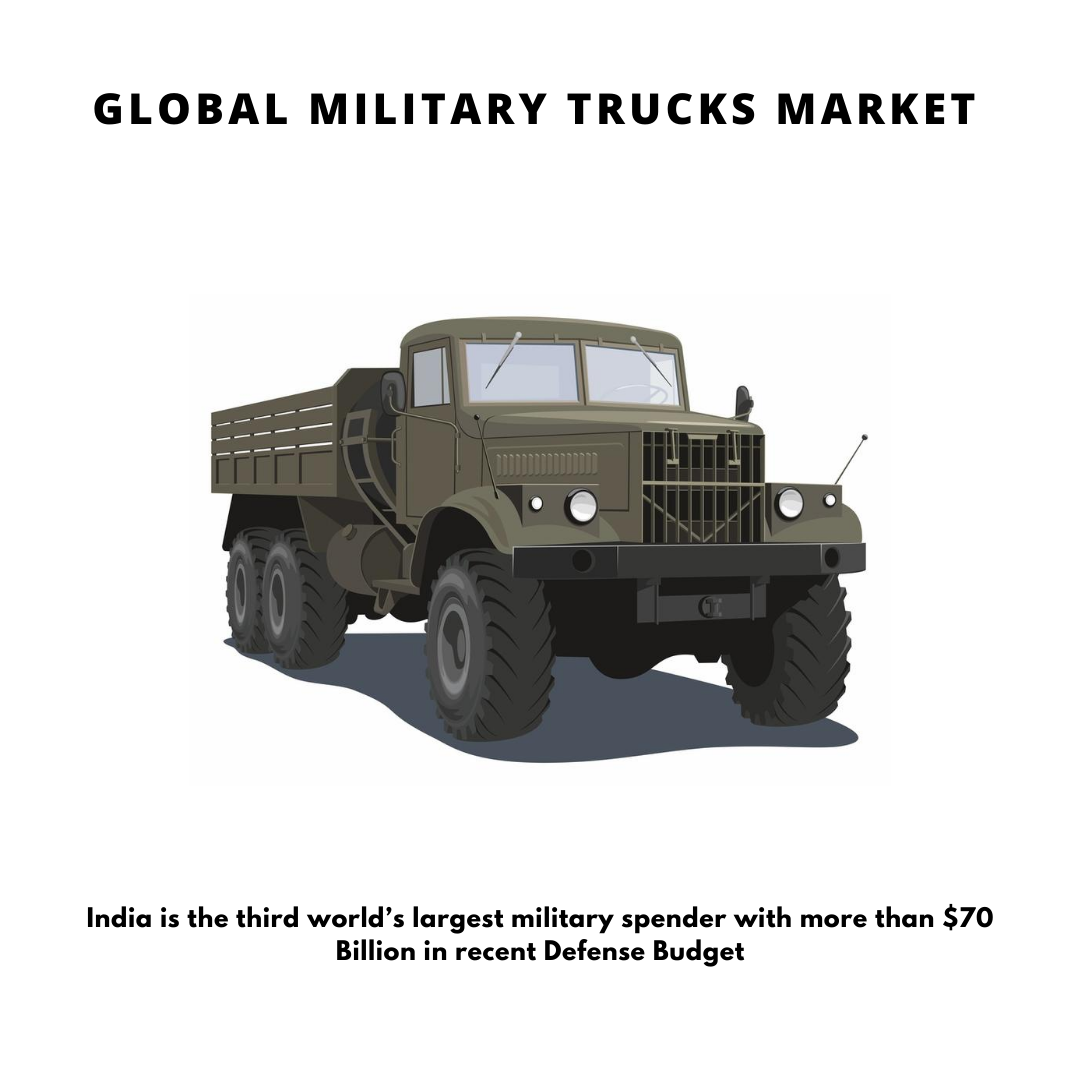 As the technologies are getting advanced and advanced with time, advance military trucks are need of the hour. Demand for these military vehicles is expected to increase manifold in the coming years.

MARKET SEGMENTATION OF MILITARY TRUCKS BY AXLE TYPES AND SIZE:

4X4 syntactically means there are four-axle ends (4 wheels) and all four wheels are provided engine torques.

So, if there is 4X2 type vehicle that means it has four axle ends, and two wheels are powered, or we can say one axle (generally rear) is provided engine torque.

These types of trucks can be used as on-road (few variants) and off-road.

These trucks are used as Light Utility Vehicles (LUV), Supporting Vehicles and Troops carrier in the military.

6X6 variants have three axles with a minimum of one wheel on each end of the axle and all being powered by engine torque.

Unlike 4X4, they are off-road and heavy-duty military vehicle. These types of vehicles are also called All-Terrain Vehicle.

6X6 with single wheels at each end of the vehicle are considered for better mobility. In contrast, two wheels on each end of two rear axles are preferred when substantial payload capabilities are required.

8X8 variants have a single wheel on each of the four-axle ends, and all eight wheels receive engine torque.

These vehicles are mostly confined to off-road, heavy-duty military vehicle. They consist of 4 axles with a minimum of two wheels on each axle end for better mobility.

8X12 is preferred for substantial payload capability requirement with rear two-axle have two wheels at each axle end.

Gasoline engine trucks were used before the 1960s, very few are still in the market. Mostly used propulsion type trucks are Diesel engine, which has water-cooled Inline 6-cylinder (I6) engines. They are sturdy, rugged and can adapt in any physical condition.

But in new Electric/Hybrid technology electric motor engine have proven themselves more efficient. Batteries are getting cheaper and better with more energy density and are easier to charge. Most commonly used battery in military electric vehicles are Lithium-Iron Phosphate battery and Lithium-Titanate battery.

RST-V (Reconnaissance Surveillance Targeting Vehicle) is an example of an electric military vehicle which is in the market.

However, Technological advancement in the case of Hybrid/Electric combat vehicle is slow due to a variety of technical challenges.

MARKET SEGMENTATION OF MILITARY TRUCKS BASED ON TRANSMISSION:

Generally, three modes of transmission are there at present in the market- Manual, Semi-automatic and Automatic.

Semi-automatic trucks have a manual transmission with an automatic clutch which means there will be power cuts while transferring engine torque to wheels.

Automatic military trucks function smoothly and with greater control over the vehicle. They have a heavy-duty torque conversion rate with low maintenance requirements. They are easy to operate and are highly rugged. Most of the military trucks available are fully automatic.

India is the third world’s largest military spender with more than $70 Billion in recent Defense Budget. Tension at the borders have led the Government to spend more in the military, and so have the other neighboring countries, to strengthen their army.

Australia has committed to spending $270 Billion on defense in the next ten years.

Looking at recent expenditure on military expansion, North America will be the fastest-growing market in the coming years. The diplomatic proceedings and border disputes between U.S. and Mexico have led the Government of both countries to procure more army vehicles and contracts have been provided to some major players to develop more advance military trucks to replace the existing fleet.

Russia’s incursion in Georgia and Ukraine have steered the Eastern European countries to increase their defense expenditure.

Most of the spending in European countries were in the procurement of military vehicle and Research & Development, which is around 23% of total Europe’s Defense Budget.

Global market share of Europe in Armoured Vehicle stands around 30%.

Five out of the ten most defense spending countries per capita is from the middle east. Some of the countries are spending more than 10% of their total GDP.

Most of this expenditure is for procurement of military vehicle and developing advance weapon system.

Global market share of the Middle East in Armoured Vehicle stands around 13%.

Globally, major players in the market are opting various methodologies and strategies like joint ventures, partnerships and agreements to expand their branch to capture more share of this profitable business.

India has prepared a roadmap to spend $130 Billion in the next 5-7 years, in which primary focus will be the procurement of pending 2,600 Infantry Combat Vehicles along with 1,700 Future Ready Combat Vehicle. And Infantry modernization will be a crucial focus as per the Government.

There is a total of around 135 military vehicles manufacturing company in India till date. And companies like Tata Motors, Reliance, Mahindra, Hero are preparing to grab a piece of this plan under Make in India initiative.

Moreover, India’s Defense Valuation has grown to $618 Billion and many more major global key players in this field are extending their reach to make way for themselves.