2.Military units across the globe are inclined towards investing heavily in procuring advanced technology-equipped vetronics systems. The demand for real-time communication vetronics is projected to remain high throughout the increasing impact of the factor on the market growth.

3The rising concerns regarding geopolitical unrest and cross-border security, along with increasing instances of border breaching, there is widespread adoption of vetronics for improving inter- and intra-vehicle communications, surveillance and navigation.

4.The emergence of wireless communications technology and increasing modernization of military vehicles are also creating a positive impact on the market. For instance, unmanned vehicles (UMV) and drones are used for surveillance purposes, along with various commercial applications, such as capturing images and videos of sporting events and cityscapes. 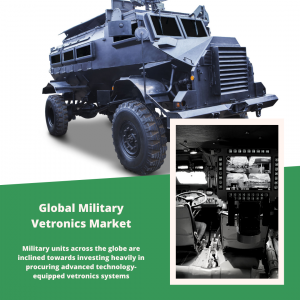 To improve the operational accuracy of these vehicles, industry players are integrating their navigation systems with Satellite Communications systems. Various countries across the globe are trying to establish a framework, where military devices can use a range of SATCOM networks, which include commercial & military networks.

The USAF had conversations with commercial satellite operators to build a hybrid architecture. This architecture will enable armed forces to switch networks between commercial and military satellites, improving connectivity and reducing chances of cyber-attacks.

Several programs are being conducted to upgrade the equipment and systems in old armored vehicles across the globe. Led by the availability of modern and evolved warfare technologies, these programs are driving the growth of the upgrade and retrofit market.

Additionally, many countries are expanding their military budgets on account of increasing terrorism and hostile activities.These activities have also resulted in the requirement of frequent repairing and installation of new parts in armored vehicles. Besides, there has been a rise in the demand for low-cost per mile military vehicles.

As the processes of upgrade and retrofit are comparatively less expensive than manufacturing a fully equipped vehicle, it has positively influenced the market growth. There has been a rise in investments for the advancement of military troop equipment for increased mobility and improved protection of land troops across both developed and emerging economies.

The pandemic has considerably affected the production and delivery of  military products, which, in turn, will diminish the growth of the market. Stringent government norms have disrupted the import and export of goods, resulting in delayed deliveries. The halt on operations has critically thwarted the production in manufacturing processes.

Prominent companies situated in the U.S., the U.K., Germany, and France have experienced enormous loss due to the outbreak. However, companies are implementing strategies to recover the financial damage caused by the coronavirus, which, in turn, can improve the market scenario.

The global semiconductors, electronics, information, communication, and technology industry witnessed diverse trends over the past two years with manufacturing and other heavy industries facing operational challenges. On the other hand, data center services, cloud computing, and other online supporting sectors gained significantly from the market trends.

Market players have adopted various strategies to improve their market shares and increase the penetration of their products, worldwide. In the recent past, market players have adopted various strategies, such as R&D and innovation, product launch, partnership, collaboration, and joint venture, expansion, and constituent as their major growth strategies to sustain the stiff competition in the market.

The prominent players manufacturing and offering vetronics systems are anticipated to continuously invest in research and development activities to develop innovative products and improve the efficiency of the systems.

These players intend to emphasize long-term agreement, joint ventures, and partnership with government organizations to increase their profit margins and sustain the stiff competition in the market.