With rapid social and economic development, China has become the world’s biggest market for the automotive industry. In the past few years, China’s after-sales service market has also developed at a fast pace. The rapid growth of new car ownership has also injected dynamism in the used car market. The volume of used car market transactions increased from <1 million in 2002 to ~12.5 million in 2017.

The Chinese auto consumer base is maturing at a fast pace and as a result of that, the average ownership period of new cars is declining. This trend is more evident in the high-end segment. Here, the turnover of automobiles is particularly strong due to the growing demands and changing tastes of wealthy individuals. Cars that are barely used enter the second-hand car market and attract new buyers at a much lower price, enticing aspirational buyers.

The growth of the used vehicle market in China will be facilitated mainly by the increasing penetration of online channels in the sector. In addition, additional value-added services offered by online providers and the number of quality checks they perform will improve consumer confidence in the online segment. Online companies rely primarily on financing through large investors such as Baidu, Tencent, and many others, and funding is expected to increase in the future, as the online used vehicle market has the greatest potential for growth.

Although there are some concerns, such as the lack of trust between the buyer and the seller, as the market becomes more consolidated and formalized through authorized dealers, this problem is likely to diminish in the future. 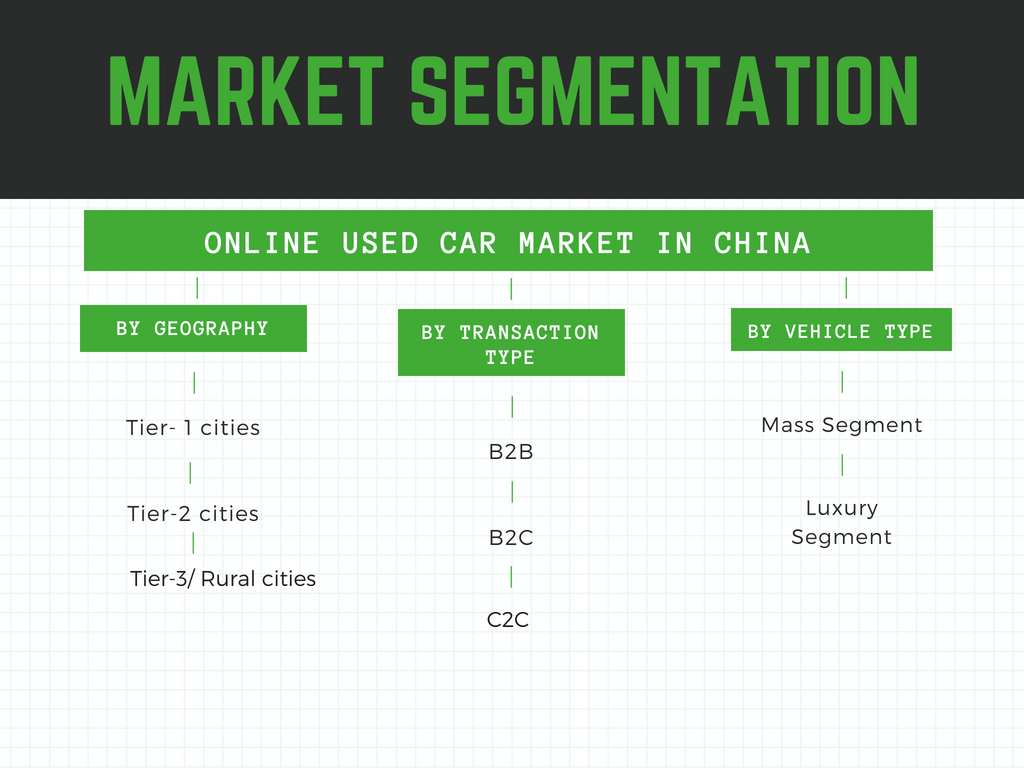 Sedans constituted ~48% of new car sales in China in 2017 and were also the most preferred vehicle type in used car space. Also, like new car market SUVs showcased the very aggressive growth and we believe this will continue in the short-medium term. In 2017, ~12.5 Million used cars were sold and online channel constituted ~XX% of that. In 2018, we estimate the volume of used cars sold to be ~15.5 Million units and online penetration to be XX%. Vehicles priced below $5K were the best-selling vehicles in the used car market, followed by $5.5-$8K price range vehicles.

Guazi(CARS), Renrenche and Uxin are among the top players in this market. The largest used car e-commerce platform used in China, “Uxin”, sold ~170,000 units in Q1 2018 which was ~60% growth YoY. We believe, the barriers to entry in used car e-commerce are comparatively lesser than offline space thus many more vendors will enter the market. Vendors in the market have gone completely digital to expand their outreach, by publishing their inventory details on social media platforms such as WeChat, Kuaishou, and Weibo to bolster their offline presence.

To enquire about this report write us at sales@mobilityforesights.com