Satellites are space-based relay stations for voice, video, and data transmission. You can fulfil the worldwide communications needs of military and government organizations as well as commercial enterprises since they offer affordable, scalable, and highly dependable transmission services that can readily reach numerous locations over broad geographical regions. Transmissions made possible by satellite communications systems can circumvent the world’s current, frequently inadequate, and unstable terrestrial infrastructure. 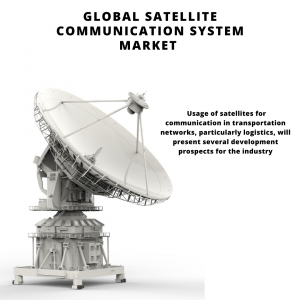 Using satellites, companies may rapidly and easily meet a wide range of communication demands since they are adaptable, ubiquitous, dependable, and quick to deploy. The main spacecraft structure, which includes power, temperature control, and directional thrusters, and communications payload, make up a satellite (which receives, amplifies, and retransmits the signals over a designated geographic area). Power and coverage are two important factors to consider while designing a spaceship.

Communication through artificial satellites, such as satellites, is known as satellite communication. A man-made satellite has been sent into space to improve communication among the planet’s diverse regions. Antenna and transponder are common features on satellites. The satellite is primarily powered by solar energy that is continually received by the spacecraft’s solar panels. Transponders, the technical term for the channels on a satellite, are used to distribute bandwidth and power over several radio frequencies. Transmission capacity of a transponder is determined by its bandwidth and power. This in turn determines the size of ground equipment required to receive the signal.

The major driver of the market is the growing need for tiny satellites for earth observation services in various industries including oil and gas, energy, agriculture, and defence. When we talk about satellite communication, we’re talking about sending and receiving signals via a beam of modulated waves sent by a satellite. These enhanced signals are then transmitted back to the earth’s surface, where they are picked up by the reception antenna. Rural regions’ growing reliance on communication technology infrastructure benefits from satellite communication (SATCOM). Thousands of man-made satellites are now in orbit around the planet.

Over the next few years,  Asia Pacific is predicted to expand at the fastest rate. The expansion of this regional market is mostly due to the presence of countries like China and Japan. In the telecommunications, IT, aerospace, and car industries, increased usage of satellite antennas is to blame for the increase in demand.

Europe is anticipated to expand at the second-fastest rate in the future due to the upgrading of infrastructure and the increase in passenger traffic in maritime and coastal tourism. The defence industry’s increasing need for continuous communication and the U.S. military’s increased need for SATCOM equipment A significant number of satellite communications providers, including Viasat, Telesat, and the EchoStar Corporation, are also helping to drive the sector forward. As a result of the expansion of military communication infrastructure, the North American nations are anticipated to grow at a rapid pace in the future years.

The Global Satellite Communication System Market can be segmented into following categories for further analysis.

By Component of Operation Type

Military surveillance, weather monitoring, navigation, and telecommunications all employ SATCOM technology. In addition, SATCOM technology is used in wartime to gather real-time data, find hidden tunnels, combine targets, and track movements, among other things. The increasing need for high-throughput satellite services and the expanding use of cloud-based services for ground mobility platforms are further factors to take into account.

The increase in small satellites, the use of low-Earth orbit (LEO), launches on reusable rocket launch vehicles and new use cases for 5G and the Internet of Things (IoT) are some of the most important developments. The growing use of artificial intelligence (AI) and the internet of things (IoT) have opened the path for Intelligent Transport Systems (ITS). These systems allow users to keep track of their trucks, and they also allow freight operators to quickly exchange and receive data. The use of satellite communication in transportation will allow the smooth and continuous transfer of data between the vehicle and the transport hub, bridging the gaps in the terrestrial networks.

As a result, the usage of satellites for communication in transportation networks, particularly logistics, will present several development prospects for the industry. There is another identifiable and considerable technological advancement, LEO. LEO is the first 100 to 200 nautical miles of space above the Earth, according to NASA. With its constellations of small satellites in low Earth orbit, SmallSat LEO proves that the whole is greater than the parts. One of geosynchronous systems’ biggest drawbacks is latency, which the satellites aim to alleviate by working together near to the ground.

Autonomous and robust Internet of Things (IoT), AI, and AI technologies are being used in various industries, including automotive, defence, and healthcare. By utilising these technological tools, a new installation or current infrastructure will be more efficient and effective than one that doesn’t. For vital tasks, militaries, and defence forces throughout the world demand dependable, secure, and adaptable communications networks. Military and defence users collaborate with commercial sector firms to create mission-specific satellite communication (SATCOM) systems.

Intelsat has been part of a major deployment requirement for the border security integrated level infrastructure. It has recently introduced the Flex Air and Flex Move Operational capabilities of integration. FlexAir for Government and FlexMove for Government from Intelsat are complete, end-to-end managed service solutions specifically designed to meet the connectivity needs of teams engaged in land-mobile and littoral operations, as well as airborne operations. Sensors and platforms from all over the world are linked together to process data, which is then sent to end users via networks.

Security and resilience are key features of the network’s design. Users encrypt sensor data, full-motion video, and communications traffic, which is then sent through the secure, robust network. The command/control and logistical data is then sent back to the distant teams. FlexMove provides seamless and immediate connectivity for land-mobile operations while freeing users from the complexity of securing bandwidth availability, configuring hardware, and managing network assets— similar to a cell phone plan.

L3 Harris Aviation has been part of the major development towards better mobilization and cost efficiency of satellite communications systems throughout the world. As a result of L3Harris’ well-proven satellite communication solutions, automated flight information reporting system (AFIRS) and automatic dependent surveillance broadcast (ADSB) users have safe, dependable, and cheap connectivity (ADS-B). The AFIRS 228 has been one of the most recent requirements of installation enhanced and secured. L3 Harris’ AFIRS 228 provides the aircraft crew with effective, accurate and secure satellite-based cockpit communications systems globally. It utilises the normal cockpit controls, such as the audio control panel and MCDU, with a second modem for safety datalink services, which employ the industry standard ACARS and FANS message set. Additionally, there are traditional telephony equipment included into the cockpit audio system of the AFIRS 228.