A seaplane is a powered fixed-wing aircraft that can take off and land on water. The planes have sought increased usage after WWII, partially because of investments in airports during wartime.

Based on technical characteristics, the planes are generally divided into Floatplanes and flying boats. Among the two, the flying boats are larger and have relatively more capacity than the former. Seaplanes that can take off and land on airfields were classified as Amphibious aircraft. In modern times, companies have been focusing on developing more amphibious seaplane designs. 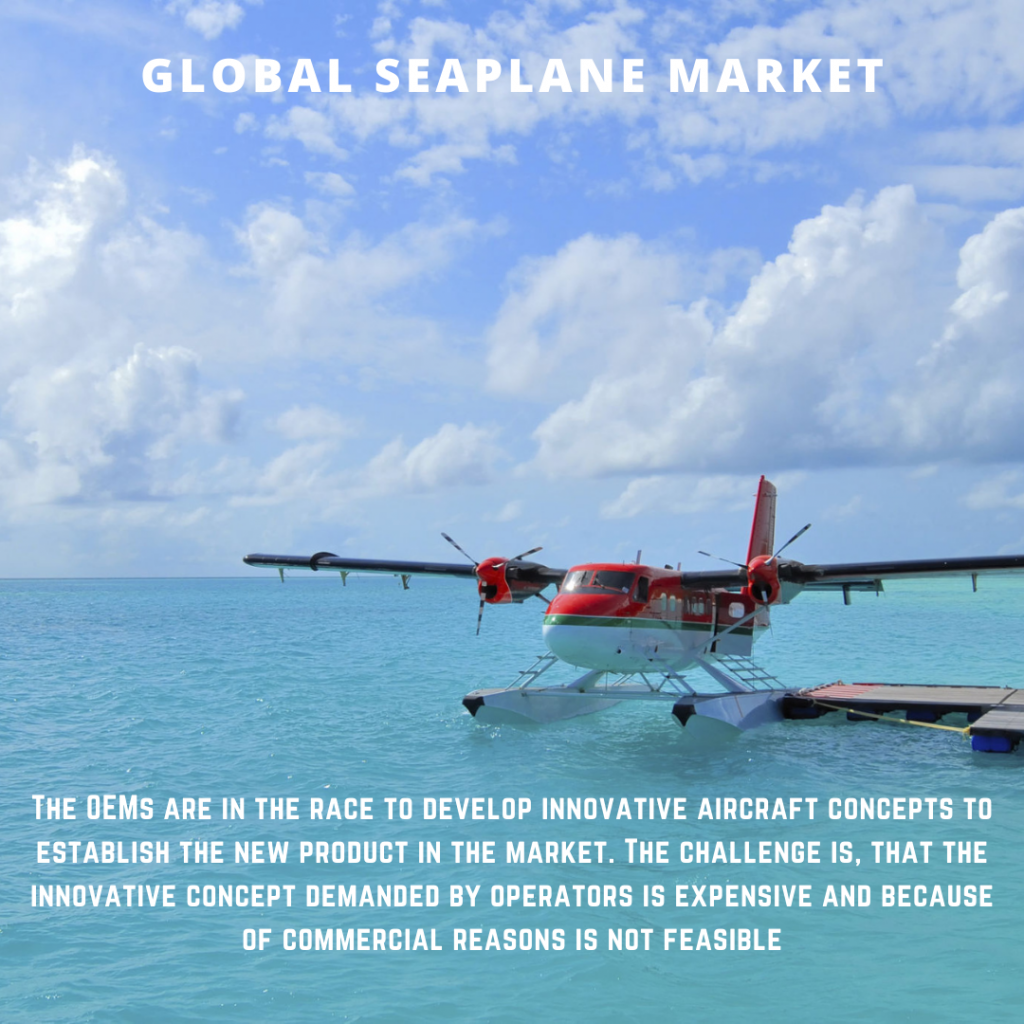 Hydroplanes was another name for Seaplane but now it is used for motor-powered watercraft that uses a hydrodynamic lift to skim the water surface. Seaplanes are non-conventionally used for tasks like sir transport around the archipelago, access to roadless areas, or dropping water on forest fires.

In this report, we will further dwell upon the intrinsic characteristics of the market-driven by this product.

The major factors, responsible for driving this market forward are listed below:

The unstable price of crude oil may act as a restraining factor in the growth of the seaplane market.

The market for seaplanes can be segmented based on product type and End-use / application. Based on product type, seaplanes are divided into Floatplane, Flying boat, and Amphibian. By the end use/application, the market is divided primarily into – Military use and Civil use. Civil use can further be divided into Passenger and Tourist use. Seaplanes are also put in use for Rescue missions, Monitoring, and Firefighting.

The key stakeholders in this market are Manufacturers, Distributors, Subcomponent Manufacturers, Industry associations, and Downstream Vendors. Improvement in technology will further drive this market forward, making it more available for exploitation in downstream applications. Also, since the seaplanes are sought to have a bloom in the upcoming times, it creates an automatic need to draft regulations  for monitoring the seaplanes air traffic.

Additionally, the companies have been working on manufacturing electric seaplanes, to replace the old fuel-driven seaplanes. Companies like Icon have introduced their ides of seaplane, called – A5 which has a carbon-fiber spin-resistant frame and a range of somewhat 427 nautical miles.

Geographically, the market is divided into various regions, which are:

North America, including countries such as the United States, Canada, and Mexico. Asia-pacific region, including countries like India, Japan, China, and South-Korea. The European region includes countries, namely: Germany, Russia, Spain, the UK, Italy, France, and the Rest of Europe. South American region has major country marketplace – Brazil and Argentina and finally the Middle-East African region.

The American seaplane manufacturers are establishing sales channels in the Asia-pacific region, owing to the potential that can be exploited by seaplanes for market growth. Countries, such as India, have been drafting regulations for the amphibious aviation sector owing to fishery and farming chores. Countries such as Germany, have been coming up with advanced innovations in seaplanes incorporating features like all-electricity engines and enhanced performances and are expected to drive the market ahead in the forecast period.

Although Covid-19 did impact all aircraft industries, the seaplane market has been focusing more on Research and Development on existing designs for seaplanes. Many companies like Icon and Lilium have been working on all-electric seaplane designs, to grab the market in the forecast period on the grounds of using clean fuel.

The OEMs are in the race to develop innovative aircraft concepts to establish the new product in the market. The challenge is, that the innovative concept demanded by operators is expensive and because of commercial reasons is not feasible.

The most important factors are the operational costs and reliability of products manufactured. New seaplane designs are needed to be introduced in the market which should be water-resistant. Therefore, it’s highly recommended to put in use new fiber materials for developing the body of the aircraft. In the seaplane business, the benchmark is the best price for realizing customer service.

LISA airplanes have been coming up with efficient designs in Seaplanes lately. Their product AKOYA is agile and much more stable than other seaplanes on the surface of the water. The company picked up the concept of using Hydrofoils for seaplanes to improve their product’s performance on the sea as well as in the air. The company calls their innovation – ‘Seafoils’ which produces almost no drag during the flight.

Not only this, new products like Electric seaplanes by a company like FlyNano, are making their place in the market. FlyNano’s seaplane is an all-electric single-seater aircraft that promises the highest power-to-weight ratio available in the market. The German manufacturer Lilium introduced its plane – VTOL that uses 36 small electric jet engines fixed in the two sets of wings with enhanced vertical takeoff capacities.

Startup Eviation recently caught market attention for its triple-prop Alice proposal which is an all-electric aircraft designed to take nine passengers for distances of up to 600 miles. To add, companies manufacturing seaplanes, also need to improve their designs in terms of noise, convenience, speed, and environmental performance.

The major companies in the global seaplane market can be listed as: