As one of the most popular winter activities in the United States, snowmobiling has become increasingly popular. Therefore, snowmobile safety is more important than ever. When travelling on ice or snow in a vehicle, you can choose to use runners such as skis with endless belt tread, cleats, or any other mix of these options, such as sled runners. 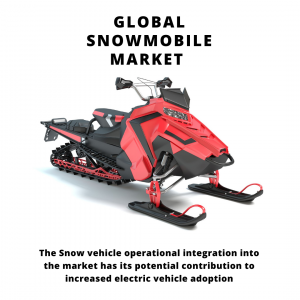 An engine-driven single or double continuous track propels a one- or two-passenger snowmobile with one or two skis in front. Skis, gasoline tank, engine, and driver’s seat are nearly universally found on snowmobiles. Using handlebars that control the skis as well as altering the driver’s position, they may be controlled. Hand-squeeze throttle and brake controls are located on the handlebars.

In recent years, the machines have become increasingly popular among outdoor enthusiasts who use them for winter fishing and hunting. As of the 1980s, snowmobile safaris are allowed in previously inaccessible parts of national and state parks, despite efforts by authorities to prohibit such activities due noise and potential harm to plant and animal habitat in the area.

There has been an increased and integrated usage of the snowmobile vehicles into the industrial perspective of operations and within the Global snowmobile market optimisations. With continuous development of EV promotion and application in all fields of urban mobility, EV applied in carsharing has become increasingly widespread. Positively affected by early well-known and successful cases worldwide.

In order to achieve a system transition, Accidents and damage resulting from unskilled and reckless use of the machines, together with their effect of frightening game animals, has prompted many calls for increased governmental control of snowmobile operation.

In recent years, the machines have become increasingly popular among outdoor enthusiasts who use them for winter fishing and hunting. As of the 1980s, snowmobile safaris are allowed in previously inaccessible parts of national and state parks under the United States of America and Canada, despite efforts by authorities to prohibit such activities due noise and potential harm to plant and animal habitat in the area.

Snowmobiling is largely a recreational sport, but it also serves a variety of other purposes. People who live in rural areas of Canada and the U.S. rely on snowmobiles as their primary mode of transportation. For search and rescue and emergency operations, police enforcement agencies throughout the snowbelt rely on snowmobiles. Most frequently, system innovations are paired with a standardized, iterative, mass manufacturing method to produce large quantities of products. Large engineering works may be custom-built to requirements, but they are subsequently used as equipment for regular manufacturing processes of Canada. Canada’s technical systems are increasingly typically imported from elsewhere, leaving the country’s economic progress to be driven by foreign forces.

The Global Market for Snowmobile can be segmented into following categories for further analysis.

The Snow vehicle operational integration into the market has its potential contribution to increased electric vehicle adoption. The selection of a certain vehicle depends on the utility that the attributes of this vehicle have to the decision maker. In earlier years, most focus was on instrumental aspects such as price, range, and fuel consumption.

There has been most recent technological advancement in the Snowmobiles with the integration of the Electric propulsion within the operational requirements. They are being designed to provide Instant torque, no matter the elevation, temperature or riding style. Zero throttle lag and a perfectly linear response enable delicate control for technical manoeuvres while an endless torque band provides unmatched towing and climbing capabilities.

The most recent development has also been the extensive dashboard-based interface being integrated at varied levels of requirements and operational systems as part of centralized display. From the centralized cooling system to the QD2 drivetrain and the integration of the available 7s Display with Ride Command is the basic agenda of the advanced technology telematics and dashboard-based display operations.

There are more ergonomic based design aspects being analyzed and implemented at various points of requirements so as to have better shaped and tunnelled tapered features with lightweight designing capabilities to provision better adaptability and speeding requirements.

Snowmobiles are the closest thing to excessive pollution-free mode of transportation through possible minor electrifications. Only the creation of power to charge their batteries and, potentially, the disposal of the batteries would have negative environmental consequences (although recycling may dispel this concern). Electric cars are the most current in a long line of developments that have swept the commercial automotive sector, and Dubai is at the forefront of this transformation.

Taiga Motors has been involved in production and innovation capabilities within the snowmobile production requirements. It has recently introduced the Ekko Mountain model which has a battery range of up to 140km. It has an integrated capability to operate on a remote basis and perform on board diagnostics with the help of a telematics connected device. The Version has been retrofitted with an advanced thermal management system ensures the battery will always be in its sweet spot – even when temperatures get as low as -40C.

Polaris has recently developed and launched the RMK Line-up Series under its Pro Featured control snowmobiles. The Pro RMK Matryx has been one of the top contenders in the market industry. the PRO RMK Matryx features effortless control and deep snow performance with the smooth and powerful 650 Patriot and the high performance 850 Patriot. The combination of the raised and lightweight platform, Patriot engines, and Polaris exclusive tracks the control capability of the snowmobiles.