1.Global private sector companies in the space community are acting as a catalyst towards the growth of the space battery market. Technological development in space batteries is another factor boosting the demand for advanced batteries in the industry.

2.The market players are striving hard for nonstop innovation, which has resulted in the development of batteries with a specific energy of 500 Wh/kg.

3.The lithium-based battery is expected to remain the most preferred choice of the space industry during the forecast period, driven by innovation towards the production of highly reliable, high performing, and cost-effective technology by dropping the SWAP of the battery.

4.The innovative outlook of space battery technology would seek ways to decrease associated disadvantages of existing batteries like the poor performance of lithium-ion batteries in enormously low temperatures.

Batteries are used in a variety of space applications, such as satellites, launch vehicles, crew return vehicles, landers, rovers, astronomers’ equipment, and the International Space Station. It may be used either as an energy storage device or as an instant source of power.

Satellite is the most dominant application as the world has been gripped by what is being termed as ‘The CubeSat Revolution’. As a result of this, space battery manufacturers are facing increased demand for satellite batteries.

The challenge, which the battery manufacturers face while designing satellite batteries is limiting its size. It is a parameter which is of paramount significance in the context of satellites as there is a humongous cost associated with launching anything into orbit and satellite batteries may take up to 50% of the payload weight. 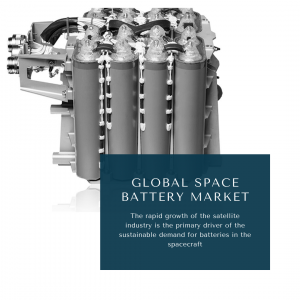 Battery manufacturers are therefore relentlessly innovating to develop batteries with higher specific energy so that it may support greater payload, which, in turn, will generate higher revenues for the satellite manufacturers.

Battery manufacturers have to undergo a tedious qualification and certification process since there is no margin of error for these batteries. There is no one to replace them if they get damaged and they have to sustain in extreme environmental conditions, such as extreme fluctuating temperatures, hard vacuum, shocks, and radiation.

Space batteries have witnessed an impactful, significant evolvement over the past five decades in which lithium-based batteries have acted as a disruptive agent. Lithium, being the lightest and the most electropositive metal, offers significant weight savings compared to traditionally used metals, such as silver and nickel.

Some of the most noticeable movements are the gradual replacement of nickel-based batteries with lithium counterparts. Another movement is increasing the dominance of satellite platforms in the space industry marked by the CubeSat Revolution.

The rapid growth of the satellite industry is the primary driver of the sustainable demand for batteries in the spacecraft. Space X, has a satellite constellation, is working towards high-speed internet facilities across the world by deploying dedicated satellites. The company plans to launch 4,425 satellites by 2024.

The launch is expected to provide super-fast internet facilities with reduced latency as compared to existing broadband services. Such developments are likely to create high-growth opportunities for both existing as well as new players in the space battery market.

The projected increase in the global government expenditures in space is further propelling the growth of the space battery market. Also, the space industry enters a new investment cycle after some years of sluggish growth. Increase in space budgets of governments will be mainly due to increasing civil space programs and high focus on human space flight.

Increasing the space budget of emerging Asian countries with an aim to have their own independent space programs will also play a crucial role in setting the dynamics of the future space industry. Growing global private sector companies in the space community are acting as a catalyst towards the growth of the space battery market.

There were over 150 new firms identified which increased investment in the space-based activities. Space X, One Web satellites LLC, Planet Labs IncKymeta corporation, and Spire are some of the major private players in the industry.

Technological advancement in space batteries is another factor that is boosting the demand for advanced batteries in the industry. Existing market players are striving hard for continuous innovation, which has resulted in the development of batteries with a specific energy of 500 Wh/kg.

The futuristic outlook of space battery technology would seek ways to reduce associated disadvantages of existing batteries like poor performance of lithium-ion batteries in extremely low temperatures and a phenomenon associated with it called Thermal Runaway, which is caused by overcharging.

1.Increasing participation of private space companies, such as SpaceX, OneWeb Satellites, and Sky and Space Global Ltd, and an expected launch of more than 4,000 satellites.

2.The increase in the number of satellites being launched into space is another significant driver of growth of the market. Both primary lithium and secondary Lithium-ion are poised to remain the most popular batteries in their respective segments.

3.The lithium-based battery is likely to remain the most preferred choice of the space industry for the rapid growth of the market, driven by innovation towards the production of highly reliable, high performing, and cost-effective technology by reducing SWaP of the battery.

4.The rising demand to monitor and to combat the increasing terrorist activities and importance of surveillance systems in the fourth-generation warfare. Navigation, another promising segment, is likely to grow at the highest rate in the market.

The penetration of lithium-ion batteries is growing in the industrial sector, globally, on account of expansion in industrial infrastructure, increasing economic viability of energy storage deployment, and growing need to reduce grid dependency for power supply.

Battery storage is an important part of the rooftop solar PV power generation process, as solar energy is intermittent and unavailable during the night. The usage of lithium-ion battery-based solar home systems.

The off-grid solar lighting and charging products, and solar PV mini-grids have increased in the Asia-Pacific and African regions.Massive investments, predominantly in lithium-ion batteries, are driving down costs, while project developers are continuously getting better at designing and building customized storage systems.