Over the last couple of decades, one of the most significant trends in the global audiovisual market has been the growth of sports coverage. This has gone hand in hand with the general commercialisation of sport and has developed at an ever increasing pace since the worldwide liberalisation of audiovisual markets.

The expansion of sports media, television in particular, has made sport omnipresent in most, if not all, countries. In effect, the enormous popularity of sport has become a substantial economic resource and this has driven the economy of professional sport in such a way that it is now heavily reliant upon the income generated by broadcasting, sponsoring and merchandising.

Consequently, sports as an economic sector has transformed from the traditional model into the more global Media-Corporations-Merchandising-Markets (MCCM) model that primarily relies on the exploitation of media rights, sponsorship and merchandising, and no longer depends on a direct, monetary exchange with spectators. 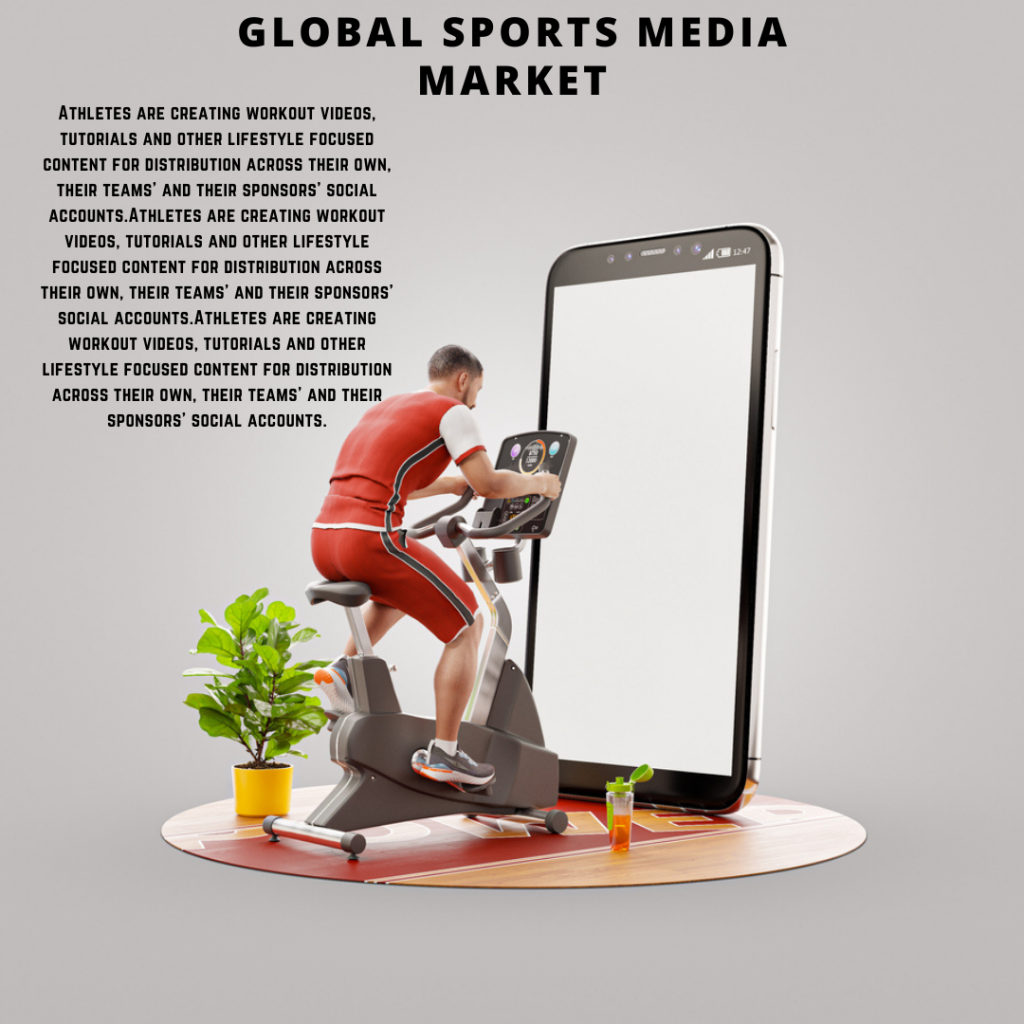 Spurred by the enduring globalisation of mediatised culture, sports have been transformed into a cultural commodity for sale on the ever growing marketplace with fans being upgraded from just being ordinary consumers.  Consequently, this commercialisation of sports has evolved into a dynamic global business environment and created a large economy of sport-related products.

This sports industry has been described as an atypical one with committed sports fans maintaining high levels of consumption and payments regardless of sports success.

The proliferation of a worldwide economy involved in the production and marketing of sports goods and services has resulted in the development of a sector that generates large macroeconomic effects and heavily contributes to regional development policies.

Sports will always be a mass consumer good. Demand for live sports -related content has never been higher than it is now.

The Premier League’s 2020 social engagement was up 146% despite a reduction in post volume.  All US leagues have followed a similar trend – NBA drawing 119% more engagements across 13% fewer social posts.

Recent Bundesliga behind closed doors matches have seen 34 x the number of viewers on BT Sport in the UK than average broadcasts. So in the longer term sport will still serve as a transformative communications platform for businesses to culturally represent their brand in richer contexts.

Media consumption of such content is expected to remain high. There is likely to be an acceleration of longer-term structural changes, including changing consumer media consumption habits, use of digital platforms, and reduction in traditional sport ‘offline’ media and advertising models.

Online media is spiking and it’s newer forms of media that are likely to continue being used. Online video and gaming have the greatest staying power after the outbreak ends among Gen Z and millennials especially. Similarly this presents an opportunity for teams and leagues who have had the presence of mind to develop their own OTT subscription services.

Many (e.g. NBA, NFL, F1) have offered free short-term use of their premium & exclusive OTT services. This has a dual role, as they can be seen to be doing entertaining and doing the right thing for their fan communities, but also more cynically, with the hope that many fans who have signed up will keep their subscription as fees kick in after the pandemic.

Like any subscription service, cable or OTT, quality and volume of content is of utmost importance in retaining subscriber bases.

THE EVOLUTION OF ESPORTS

There has been a 27% increase in video streaming worldwide. However, it’s not just TV & movies people are streaming. Gaming viewership is up by a considerable amount during peak hours in developed countries.

Covid-19 has only accelerated this trend with people finding themselves quarantined at home. As well as gaming, professional eSports around the world are seeing a huge spike in viewership over the past few weeks as they fill the void left by cancelled live sport competitions for some viewers.

While properties across sports have lost out on sponsorship revenues as a result of the Covid-19 outbreak, those within esports have bucked the trend with an overall increase in revenues this year.

Esports was seeing rising popularity anyway, enticed by high viewership figures and the opportunity to reach a millennial demographic, but it has also been better able to cope with the impact of the virus, and has had the opportunity to capitalise on gaps in the sporting calendar.

The lack of sport has allowed developers to build their presence among sports fans who ordinarily would be consuming traditional sport content. As such, this has provided brands with an alternative platform to engage themselves with, even at a time of extreme short and long-term economic uncertainty.

BMW – ESPORTS, ‘UNITED IN RIVALRY’ BMW has partnered with five of the world’s top eSports organizations, with teams competing in League of Legends. The move was most likely agreed long ago, but is a recognition of the growth of eSports, particularly in lights of its growing online reach in the wake of Covid-19

ESL PRO LEAGUE ESL Pro League, which ran from Mar16 – Apr 12, was the most successful season in the competition’s history. Viewership hit a new record of 489,120 concurrent viewers across all platforms Average audience per minute was 164,494, a 215.5% increase compared with 2019

This is incredibly encouraging for broadcasters, leagues and teams who are preparing their comeback behind closed doors and provides a huge opportunity for advertisers looking to tap into these markets.

CONTENT CONSUMPTION FOR SPORTS RELATED EVENTS IS ON THE RISE

With a lot more time on their hands and no live sport to watch on linear channels, fans are still as passionate and hungry as ever for sport and are turning to video content to get their fix. This increase in demand has led to leagues opening up their archives across owned and social media channels, launching virtual competitions and events, and athletes providing challenge and workout content.

In-house media teams at leagues and clubs across all sports have been quick to pivot and harness the immediacy, flexibility and interactive nature of social and video streaming platforms to experiment and drive engagement with fans while the uncertainty of live sports remains a constant in these changing times.

Athletes are creating workout videos, tutorials and other lifestyle focused content for distribution across their own, their teams’ and their sponsors’ social accounts.

There’s a lot that sports organisations, sports media rights owners and brands can be doing to engage fans despite disruptions. The most important of which is offering them exclusive content, redistributing old content, and promoting live interactions with athletes.

The Premier League social engagement was up by 146% despite fewer volume of posts. The NBA had drawn more engagements across fewer posts.

The NFL increased both its volume of posts for social and video, attracting 37% more video views, and 41% more social engagements overall. ESPN: “The Last Dance” reached record breaking audiences across the world, averaging 5.8 million viewers across premieres of its first six episodes on ESPN.

In the new Sponsorship Paradigm, audience data, compelling content and connection to business objectives are the winning traits. Sponsorships are continuing to evolve into richer, two-way relationships. The market had already been trending in this direction, but today the most successful sponsorships are proper partnerships.

Sponsorships have become more flexible and tailored, and includes more value-in-kind. Brands too seek rights holders that understand their business strategies and can align sponsorships with them.

Rights holders invest more in digital content and activation capabilities, in order to engage fans, collect data and service sponsors. Rights holders that can prove their value using data is expected to take larger shares of the sponsorship revenue pie.

The ability of sport organisations to connect directly with fans and know exactly who the fan is has proved to be favourable for both parties. Virtual Reality today has the ability to enhance the spectators’ Experience and give them a real time user experience.

Sports organizers are trying to implement virtual reality (VR) technology to improve the spectators’ experience in sporting events. Virtual reality generates images, sounds and other sensations that simulate a physical presence in an imaginary environment.

Clubs and teams are experimenting with simulated and 360-degree environments to enhance the match viewing experience of the spectators by allowing them to have a virtual walkthrough of the stadium or the race track and view the match at different angles. For instance, the NBA game between the Sacramento Kings and San Antonio Spurs was broadcasted in VR and proved to be a massive hit. NASCAR has also created an interactive fan area at the race tracks with the implementation of virtual reality.

THE GLOBALISATION OF INTERESTS

The increasing importance of Consumer interests and consumption patterns in China and India, but also Africa, South East Asia, the Middle East and Latin America is expected to lead the pathway to change in this segment. On the backend, however, sports businesses and publishers are frantically coordinating large sums of data for each club to meet their fans’ expectations.

It is no wonder that more and more organisations within the sports industry are moving to automated reporting through natural language generation thus widening their user reach and engagement to a mass level. The engagement of new demographics in this regard and the rising importance of their tastes, values, preferences and consumption- specifically millennials, Genz and women is expected to further transform the way sports media is consumed in the forthcoming years.

The sports industry is made up of a large number of diverse, smaller players across vastly different markets. Some sell sporting goods and apparel, while others are club franchises or media distributors.