3.Moreover, such investments will help in the development, maintenance, and procurement of various missile systems. For instance, in 2016, post the announcement of the modernization of the US nuclear forces, Russia commissioned designers to design and develop Sarmat, an advanced SLBM, by 2020.

4.Maritime missile launch systems are becoming a critical element of security and are utilized in countering potential sea-based attacks. Several nations around the world have launched and implemented policies related to modernizing their naval forces.

There has been a dramatic rise in adoption of maritime missile launch systems for detection and destruction of ships and submarines that try to illegally enter restricted water zones across the globe. Lack of reliable security systems and modernization initiatives result in a tremendous rise in instances related to security breach at naval bases.

Vertical missile launching systems have changed naval warfare for the past 30 years by giving an ever-growing launch ability to retaliate to a variety of theater-based threats. These systems have altered the way all naval forces think regarding deep-water-based missile launch systems, owing to their unmatched performance and adaptability. 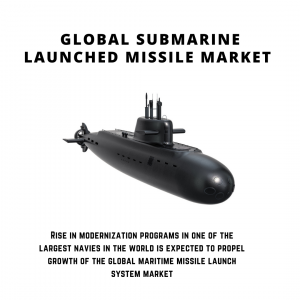 Vertical missile firing system has become a reliable defense system of fleets across the globe due to its ability to respond to various aerial, surface, and subsurface threats at the same time. Owing to high efficiency and reliability, use of vertical missile launching systems is expected to grow considerably in the future.

Recent advancements in ballistic missile defense technology have given the vertical launching system of the U.S. Navy a new and enlarged duty. With consistent fruitful intercepts of complex targets, the U.S.-made Aegis Weapon System that comprises VLS, a weapon control system, a radar, and different classes of missiles, has reformulated its naval strategy.

Many next-generation Aegis-armed vessels are being manufactured or modified with ballistic missile defense (BMD) capability, in addition to performing conventional navy-specific roles of air, surface, and subsurface defense. The Aegis BMD ability has proven quite successful and the U.S. The Navy has adopted a gradual adaptive approach to BMD.

As maritime security is one of the most critical defense units, naval modernization initiatives can be witnessed throughout the world. Naval modernization program includes a wide range of ships, airplane, and missile procurement plans, in addition to enhancements in upkeep and logistics, personnel education, and training.

Navy modernization initiatives in China are aimed at increasing competencies for handling any unfortunate set of events or for achieving a greater degree of control over China’s near-seas region, protecting China’s commercial sea lines of communication (SLOCs), principally those connecting China to the Persian Gulf; for challenging impact of the U.S.

The world has witnessed closure of projects involving missile launch systems that incurred high costs. For instance, in the 1970s, the U.S. Army successfully developed and deployed the Safeguard Program- a U.S. Army’s anti-ballistic missile system in the North Dakota region at a price of $23 billion, excluding the cost of developing nuclear missiles.

It was shut in just months and the Department of Defense shut it down as it was too costly to operate, and did not contribute much to ensure U.S. security. Hence, costs continue to play a vital role in the success or failure of missile defense programs globally, which is expected to limit growth of the global maritime missile launch system market during the forecast period.

The rapid spread of COVID-19 had a significant impact on the global maritime missile launch system market in 2020, owing to the implementation of strict lockdown measures across the world.

COVID-19 pandemic led to several challenges for the maritime missile launch system industry such as disruption in the supply chain of raw materials, logistics challenges, and others.

On the other hand, the missile launch system manufacturers had to reduce expansion and R&D investments to withstand the decline in revenue and operating performance of the defense industry. The delay in purchase orders and slow production rate were some of the challenges observed in the maritime missile launch market throughout the year, and are expected to continue for a few years.

Development of advanced maritime missile launch technologies has become critical, owing to the exponential rise in illegal entry of submarines in restricted international waters. The need for maritime missile launch systems for checking illegal entry of submarines and ships is on the rise, owing to the rise in conflicts between different nations worldwide.

Maritime missile launch systems are becoming a critical element of security and are utilized in countering potential sea-based attacks. Several nations around the world have launched and implemented policies related to modernizing their naval forces.

Six countries lay overlapping rights to the South and East China Seas, which is an area that is abundant in natural gas and hydrocarbons, and via which trillions of dollars of international trade flow happen annually. As China enlarges its naval dominance and constructs military bases on man-made islands.

It has been met by increasing forcefulness from other regional claimants such as Japan, Vietnam, and the Philippines. Frequent standoffs in the disputed area happen in the area ranging from the Senkaku/Diaoyu Islands on eastern edge of China to the long stretch of archipelagos in the South China Sea that encompass hundreds of islands.

The U.S. has also built up its military activities and maritime presence in the seas, indicating its raised role in clashes, which, if not handled properly, might turn part of Asia’s naval regions from flourishing trade channels into grounds of continuous conflicts.

According to the research analysis, the global submarine missile launch market is highly competitive due to the presence of many global, regional, and local vendors operating in the market.

In addition, in-house manufacturing capabilities, product offerings, global footprint network, client bases, and R&D investments are key areas that all vendors focus on to gain a competitive advantage over their counterparts.

Vendors compete with each other based on cost, reliability, product quality, and aftermarket services. Providing cost-effective and high-quality submarine-launched missiles is crucial for vendors’ operations, in order to survive and succeed in such an intensely competitive market.

Airbus Defense and Space engages in designing, developing, and manufacturing of space and defense products for governments and other institutions. It operates military aircraft space systems i.e. communications, intelligence, and security (CIS); and electronics business lines.

In the global submarine-launched missile market, Airbus Defense and Space was involved in the development of the M51 and M45 missiles, which are used by submarines of several countries around the globe.

Boeing Defense, Space & Security, along with its subsidiaries, engages in the aerospace and defense businesses across the world. The company developed Harpoon, the anti-ship ballistic missiles, which are being used by various submarines of several defense authorities across the globe.

The company developed the BrahMos missile which has a speed of Mach 2.8-Mach 3 and weighs approximately 6,600 pounds. It can be launched from a ship-based platform, land-based vehicle, or submarine. The air launch of BrahMos is currently being tested and evaluated.

Lockheed Martin engages in the production, supply, and R&D of advanced technology systems, products, and services to global defense and aerospace industries. The company developed Trident II (D5) submarine-launched ballistic missile (SLBM), which would be integrated with the Ohio-class submarines and Vanguard-class submarines.

Raytheon provides its solutions to the defense and other government markets across the world. The company developed the Tomahawk submarine-launched cruise missile (SLCM), which is integrated with several nuclear-powered submarines such as Virginia-class and Los Angeles-class submarines.