The Thailand economy is mainly export driven. The Thailand government spends more than 1% of their GDP in Research and Development in different fields of science. 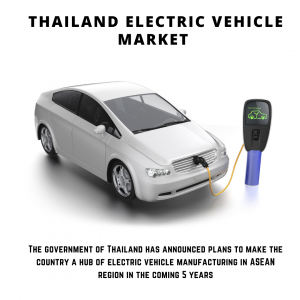 Thai Automotive industry is one of the largest in Southeast Asia and it is the second largest user of pickup trucks.

The world has understood the electric vehicle capability and potential capacity in the coming future; overall more than 35% of electric vehicles have been registered in 2020 counting to be more than 9 million electric cars in being on the road over the world in 2020. Major players like Volvo, Mercedes, MAN, and TATA have started introducing the electric trucks and buses in the heavy vehicle segment encouraging the world’s people to use them.

As discussed earlier Thailand lands in the category of developing nation, the country is still growing and attaining different SPGs (Sustainable development goal). The electric vehicle market in Thailand is still at slow pace although the hybrid electric vehicle launched in 2010.

According to the Land Transport Department, in 2017 there are almost 102, 408 registered Plug-in hybrid electric vehicles whereas 1394 battery electric vehicles are registered shows that the people are not familiar or not interested in shifting from conventional technology transportation systems. However Thailand Board of Investment has encouraged the manufacture in this segment, commercial EVs are expected to launch by 2025.

The Thailand’s Ministry of Energy, Energy Policy and Planning Office has forecasted that purchase of electric vehicles (EV) in Thailand will rise from 9,000 in 2018 to 406,000 in 2028 and 1.2 million in 2036 with 690 charging stations all over its territory.

Thailand based companies like Mine Mobility have already launched 3 prototypes from their independent R&D team with the tag as MISSION NO EMISSION. As we all are aware that conventional type engines have their emission standard, safety standards, size classification, Customer Standards, etc.. but when we look into electric vehicles there are no such standards set up for union talk between the countries that as well affect the performance and manufacturing cost of other hidden problems in this sector.

As we are familiar that the main step of the automotive industry is the production stage, for this process the companies set up their plant nearby raw material, ancillary units, low labor cost, high technological area, etc.

But due to COVID the world has faced a situation similar to Spanish flu in 1919 and experienced the lockdown all over the world. These halt the production, distribution of semi-finished, raw material, manpower essential for the production of vehicles.

Automotive industry has experienced huge losses that will take time to recover. After a lockdown small businesses that might supply the part essential for the completion of vehicles has affected because they are either in huge debt or being bankrupt.

The Electric Vehicle market in Thailand is US $ XX Billion in the year 2020 and expected to grow at the CAGR of XX% by 2026. As Thailand is amongst the developing nations, local players or startups have yet to emerge to rationalize the market and provide the proper competition and exact requirement of locals to fulfill their needs.

Some companies like Scoota, Electric Vehicles Thailand, Concordia, etc.. came up in the market as rental services, commercial electric vehicle manufacturer, manufacturer and supplier of battery operated vehicles respectively. The Government of Thailand is also aimed to increase the percentage of sales in Electric vehicles as it is observed that in the year 2010 Land Transport Department registration of hybrid electric vehicles was almost 84000 units whereas the battery electric vehicles registered was in two digits only. But in 2017 as data show above there is a huge gap.

The government of Thailand has announced plans to make the country a hub of electric vehicle manufacturing in ASEAN region in the coming 5 years. The Government has planned to promote the advantage of electric vehicles through state and other agencies and set a target to achieve 250,000 electrified vehicles, 3000 electric public buses, 53,000 electric motorcycles by the end of year 2025. The government has formed the National New Generation Vehicle Committee to promote EVs Development.

Instead of competition between electric vehicle manufacturer and oil and gas company, the companies from both the sector will help out each other to build more number of charging stations by the year 2026, the government of Thailand also said that the charging station should be within 200 km distance apart from each other this also shows the long range electric vehicles manufacturing may get more focus in near future.

Apart from Thailand based companies the global giant (Mercedes, TATA, BMW, Ford, Honda, Nissan) has also set up their manufacturing plant. This not only boost the economy of Thailand but also help out the local companies to flourish and have collaboration with them to development the better vehicle in coming future