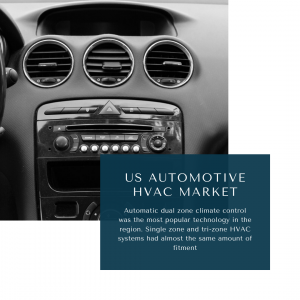 The volume in the first 5 months of 2021 increased approximately by 7% Y-o-Y with 5.6M units sales. The midsize SUVs and midsize hybrid cars witnessed higher growth rates in the first 4 months with 34% and 41%

Market Value wise US is the most valued market in the automotive HVAC segment due to its high B-2-B price of the HVAC content per vehicle. The average price is estimated to be $XX.

Rear AC vents feature too was got bolstered by the sales of SUVs as most of the top sellers were equipped with this option.US continued to be the leader in adoption of rear ac vents in the passenger vehicles with ~XX% fitment

Ford vehicles are equipped with particulate air filters across its line-up. In some of the Chevrolet pickup-ups and SUVs heavy duty air filters are fitted.

Dust and pollen filter is a standard air filter feature in Toyota vehicles. Hyundai in its high-end vehicles such as Tucson and Palisade CleanAir Ionizer filter is equipped along with dual zone climate control feature.

BMW vehicles are equipped with micro & “active-charcoal” air filters in the cabin of its cars.

In Mercedes vehicles, dust, pollen and activated charcoal odor filters are equipped in every model in the line-up.

US AUTOMOTIVE HVAC MARKET BY TECHNOLOGY

In the luxury/premium cars segment the automatic HVAC system is installed in almost every model. The rear AC technology has a 100% penetration in this segment.

Brands like Nissan, Buick, Fiat and some models in Chevrolet had lower penetration of automatic HVAC system compared to other brands.

US AUTOMOTIVE HVAC MARKET BY ZONE

There were no vehicles among top 10 most selling cars equipped with tri-zone & subsequent multi-zone climate control features.

Mercedes was the first OEM to introduce 5 -zone climate control system in US as it was provided as an optional feature in GLS models. However, only 2 Mercedes vehicles GLE and GLS models were fitted with the 4-zone HVAC system

Toyota Tacoma and Lexus RX were the 2 of the 4 models of the top 30 best-selling vehicles to equip tri-zone climate control.

BMW’s 7-series and X5 models are equipped with 4 zone climate control features. BMW was one of the first OEMs to introduce 4-zone HVAC system in US.

The number of models in Volvo equipped with 4-zone HVAC was increased in 2021 compared to last year’s line-up.

Market volume wise US remains 2nd in the automotive HVAC fitment behind China. However, the market value will continue to be the highest for any region.

The impact of COVID has pushed the HVAC market down by at least 18%. Pre-COVID numbers in terms of volume & value will be achieved only by 2023.

There has been continuous development in the design of Human Machine Interface (HMI) in passenger vehicles. Most of the premium cars have moved on with the knobs and dials. The adoption of touchscreen to control the various interior features including HVAC have gained popularity.