Data Center is the space dedicated for the computer systems for transmission & storage of data. Nowadays the data is one of the crucial asset of the world, as the technological advancement took place the data and information started to store on computer system, as the storage capacity increases the companies started to assign the dedicated room than building containing the storage server and device for keeping the data secure.

As the importance increases the hackers have started attacking their server and leak or lock their information for ransom. 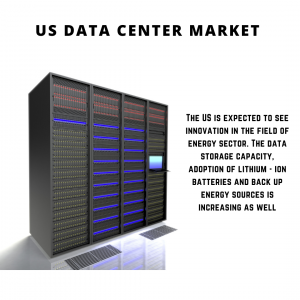 The various market growth and their technological advancement took place to facilitate the data centre industry like, cooling systems, data communication, connection system, storage capability, renewable energy, etc. Due to advancement, the Telecommunications Industry Association accredited by American National Standards Institute (ANSI)was formed in 1988 and Uptime Institute established in 1993. The data centre term originated when the dot – com boom came in the late 1990s, due to massive adoption and usage of the internet system.

Hyper scale data centres are prominent in the US, more than 45 hyper scale data centres are operational or under construction in the US by companies like Amazon, Facebook, Google, Apple, Digital Reality, QTS Realty trust, etc. South Eastern States like Virginia, North Carolina, South Carolina, Texas, etc. are the main attraction of installing the data center in the US because of strong network connectivity, use of renewable sources of energy and tax incentives.

As a sustainable activity going in the data center space Hyperscalers such as Amazon, Microsoft, and Google have made carbon-neutral commitments and have made significant investments in sourcing renewable energy for their facilities.

In 2021 alone, the likes of ChinData, MTN, and IBM have made similar pledges to become carbon neutral before 2040.

The data center consumes a lot of energy for its infrastructure and equipment to run in proper manner, now the companies are trying new ways to save energy demand or to use renewable sources of energy for their functions to perform.

High penetration of the 200GbE and 400GbE switch ports drives the market. Servers are continuously getting more traffic, and whether it is the hyper-converged, blade, modular, or even just dense rack servers, the density is increasing, and every server features dual 10 Gb network interface cards or even 25 Gb.

Further, the increase in private cloud applications and virtual desktop infrastructure puts additional demands on networks that penetrate the demand of 200GbE and 400GbE, and by these factors, players are focused on innovating ethernet switches.

Players such as Amazon, Microsoft are focused on adopting 200-Gbps technology and 400GbE for their next-generation data center adoption in the United States.

EFFECT OF COVID ON US DATA CENTER MARKET

The COVID-19 pandemic is resulting in a massive increase in computing capacity demand in pharmaceutical companies and research institutions in the region, which focused for using HPC systems on a large scale to carry out calculations and simulations in the bioinformatics and epidemiology field in the shortest possible time, where the conventional computer systems can take several months or even years.

The COVID has affected the future plan and current manufacturing or establishing data center work, leading to decrease in the growth rate of data centres. During the lockdown this has also shown that the data center is very important for the current world to survive because of increased internet usage, sharing and saving files in the cloud.

Some companies like Facebook have slowed down the process of their new construction due to decrease in workforce and raw material during the lockdown. After the COVID the health care sector is expected to grow at a faster rate and the information of patients is needed to be kept online.

Because of Covid-19, companies were under huge pressure to expand. The unexpected and urgent need for capacity put a huge strain on infrastructure, without the typical contingency, so it became over-used and essentially, thrashed.

While cloud requirements won’t stay at those Covid-19 accelerated levels, certainly the crisis has re-written the future of virtual working. Some organizations have already committed to a remote working model throughout 2021, as cloud-based communications like Microsoft Teams and Zoom create new ways of working. This means cloud adoption levels will still be higher than we forecast before Covid-19 and that dependence on a resilient, expandable cloud infrastructure will remain.

Covid-19 turned the argument for on premise cloud on its head. Experience showed that those businesses that had argued the case that on premise cloud services meant maintaining control and having close oversight of their data assets, found the opposite was true.  IT managers have had to make hard decisions about how to fix servers, manage upgrades and trouble-shoot during lockdown. At the same, businesses with hosted cloud environments were able to operate almost seamlessly.

The US data centre market is estimated to be US $ XX Billion in 2020 and expected to grow at a CAGR of XX% by 2026. As a developed countries, the growing popularity of IoT (Internet of Things) introduction of 5G in the market, continuous increasing upload of information in the market, effect of artificial intelligence, adoption of 200/400GbE port, user of online gaming media, etc. says that the data center in the US has to increase at a faster pace.

The US is expected to see innovation in the field of energy sector. The data storage capacity, adoption of lithium – ion batteries and back up energy sources is increasing as well. THe utilisation of data centers generates a lot of heat that has to be rejected and managed for servers to continuously cool in minimum time.

Cooling systems are implemented at centers, the application of artificial intelligence and Machine learning may play an important role for increasing the efficiency of data centers. The continuous data gathering from a real time center can help out and evaluate what portion or division of server needs higher cooling rate.

Data centres use huge amounts of concrete and steel, which are major sources of CO2, and as the sustainability gains from operational efficiencies dry up, firms will have to look to embodied carbon in the construction phase if they are serious about being climate neutral. Therefore, the modern green building movement has largely focused on reducing operational energy – the energy used to heat, cool, and power buildings.

CarbonCure reduces the emissions of the concrete industry, by injecting waste CO2 into the mix. It hopes to remove 500 megatons of carbon dioxide annually from the concrete industry by 2030. Compass Data Centres are a CarbonCure customer, with CIO Nancy Novak saying the company estimates an average of 1,800 tons of CO2 per campus as a result. Amazon and Microsoft have also invested in the company.

CyrusOne announced quarterly revenues of $284.6 million, up 11 percent year on year. Net income was $7.4 million, an 84 percent decrease. Adjusted EBITDA for the period was $141.9 million, an increase of 4%.

Gartner global data center market spend is predicted to reach €160bn by the end of 2021. This is fuelled by hyperscale growth, the provision of new capacity, and in Europe alone, CBRE predicts 2021 will be a record year for new supply, with more than 415MW of capacity added in the Frankfurt, London, Amsterdam and Paris (FLAP) markets.

Mission-critical products, such as uninterruptible power supplies (UPS), are a foundational component of data center resiliency. They provide peace of mind and protection against downtime, which is arguably the single highest priority for operators.

Facebook is constructing two additional buildings for the facility on top of the two original ones located on the North Huntsville Industrial Park, taking its total investment in the site to more than $1 billion.

The company has also invested in local Power Purchase Agreements (PPAs) to offset the facility’s power usage. It signed a deal with Tennessee Valley Authority in 2018 to build solar facilities capable of producing 377MW; one in Colbert County, Alabama, a 227MW installation from First Solar. The other will be in Lincoln County, Tennessee, a 150MW NextEra Energy Resources project.

Cloud and colocation service providers have been benefactors of increased SaaS and network customer demand from the pandemic response necessitating remote working and educating, the services are particularly recession-resistant and demand for services has been increasing, which translates to data center construction projects remaining in progress to assure they can meet demand.