The US Sports Media market generated $xx bn in 2019, making it by far the world’s biggest media rights market in the world. It accounts for about xx per cent of the total global sports rights market. The sports Media Market across North America is further expected to grow at a CAGR of xx % by the forecast period considering the current trends and popularity for this segment.

The United States is home to four of sport’s 10 largest properties, the NFL, the NBA, MLB and the NHL. The huge rights fees paid by US broadcasters also play a major role in determining the world’s 10 most valuable sports: NBC pays 52 per cent of all Olympic Games rights fees; US College Sports is the fifth- most valuable sport; while the domestic fees paid for Nascar rights are greater than the combined media revenues generated by Formula One.

This reinforces the strong premium that marketers put on sports media, and how professional leagues continue to ramp up the prices to their content rights as the demand remains healthy and the viewing landscape continues to shift.

Sporting events are cherished by cable and broadcast networks as one of the last platforms for destination viewing, but at the same time, TV ratings have been steadily dropping as more consumers continue to cut the cord in favor of digital alternatives. This has realigned where some leagues think about airing their games. 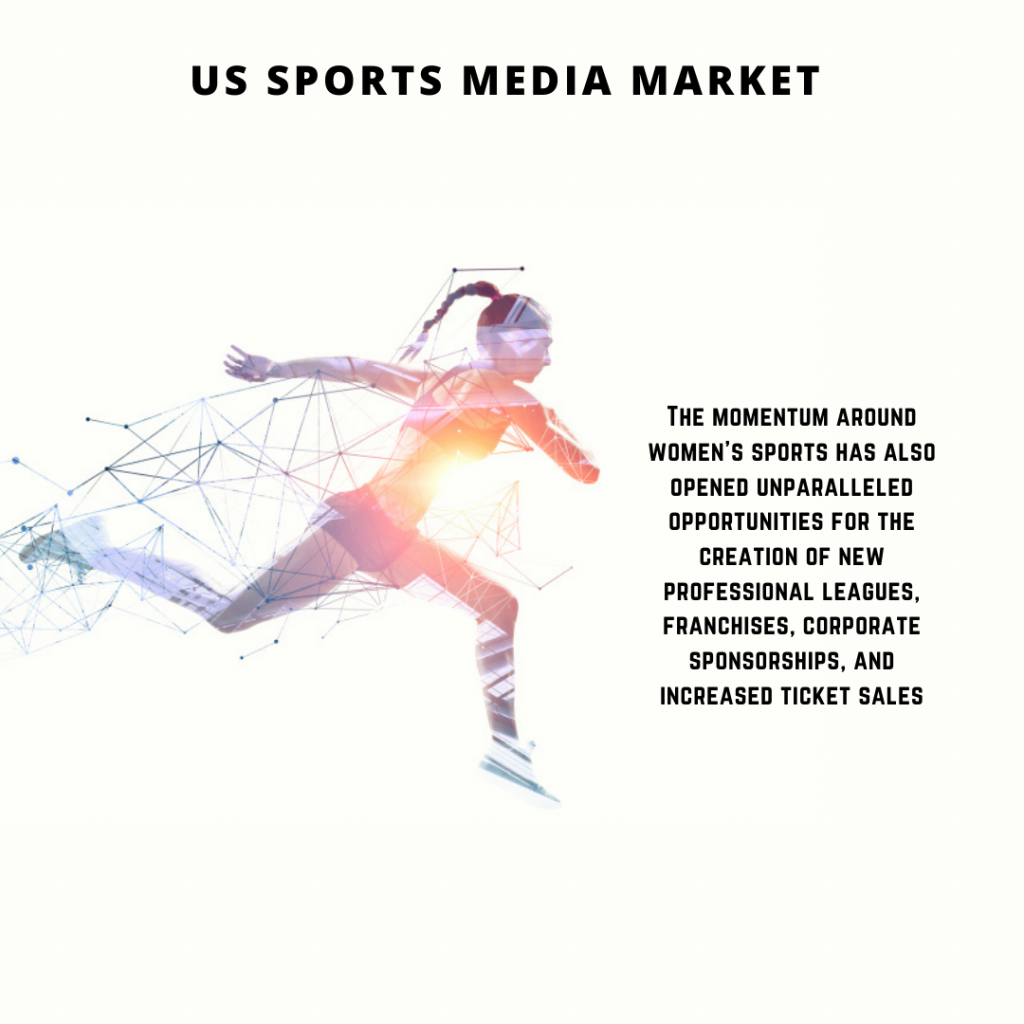 Amazon, for example, paid $50 million — plus a reported extra $30 million in free marketing and promotions — to the NFL this year for the rights to stream 10 Thursday Night Football games on its Prime Video service.

Verizon this week also closed out a five-year deal with the professional football organization reportedly worth up to $2.5 billion that allows it to stream some games on mobile phones and other platforms and devices, including tablets.

While these digital streaming rights are becoming a more important part of this industry, It is expected that at least in the near term broadcast rights are going to take precedence over digital rights to avoid further diluting the media rights fees.

TV networks are much more willing to put their money into airing live sports, but digital players have shown that they’re eager to get into the game to potentially drive user growth and ad revenues, connect with younger fans and boost engagement beyond the traditional linear viewing experience by combining viewing, gaming and real-time commentary on a single, streamlined platform.

THE RISE IN POPULARITY OF WOMEN’S SPORTS

The momentum around women’s sports has also opened unparalleled opportunities for the creation of new professional leagues, franchises, corporate sponsorships, and increased ticket sales. This could represent a tipping point for women’s sports, powered by the increasing exposure of teams and athletes. Women’s professional sports may be well positioned to benefit from this wave of excitement.

With an even brighter spotlight on women’s sports this year, sports organizations might consider putting their investments into this sector. This could drive growth that not only benefits leagues and franchises, but women athletes as well.

Sponsors are expected to get involved now to capitalize on the new opportunities and avenues for engagement that this growth area may create. Broadcasters too are looking to drive overall interest in women’s sports by contributing to the value of current deals.

THE CONTINUED EVOLUTION OF ESPORTS

In 2019, the global esports market generated $xx billion in annual revenues, primarily from sponsorships and advertising to an estimated global audience of 600 million fans. In 2020, it is expected that the esports landscape will continue its rapid evolution. With esports leagues getting more and more popular among consumers, an acceleration of relationships among teams, leagues, and players is projected.

As the esports ecosystem expands, it is projected to fuel long term growth in streaming and broadcast sponsorships involving platforms such as Twitch, YouTube Gaming, Facebook Gaming, Mixer, and Smashcast among others.

In addition to more integrated sponsorships that can occur in-game and as part of esports events. Esports players and personalities like Ninja and DrLupo are also likely to see further breakout success as esports continues crossing into the mainstream and more players than ever secure opportunities to work with various brands looking for ways to influence their  audiences.

New branding and sponsorship opportunities are also expected to emerge especially for brands that align naturally with typical gaming behaviors (such as energy drinks, meal delivery, and peripherals). Many brands are trying to lead with authenticity and find ways to tap into this market niche, even for brands that aren’t typically associated with gaming.

With esports’ popularity skyrocketing, many markets are ripe for launching new franchise leagues and city-based teams. Other opportunities include one-stop solutions for players and teams to reach larger audiences across many different over-the-top (OTT) or streaming engagement channels.

The love affair with sports in the United States is not unknown to the world. Fostering growth in this segment is perhaps a new, natural and a powerful teammate in gambling. Almost overnight, the sports gambling industry has been transformed and is the most significant catalyst shaping today’s sports market.

With the confluence of fantasy sports, technology and legalization of sports gambling, today’s consumer is getting more and more involved in this new segment. It is no longer about fulfilling a need in a niche market, but rather about satisfying a widespread demand seeping into the current sports culture.

As the entertainment and media industry constantly evolves to meet future customer demands, gambling is expected to have a growing influence in the market in the upcoming years. The more the market and consumer culture embrace gambling, the more it sparks growth in revenue streams.

The popularity of sports betting has led to licensing and sponsorship opportunities for the leagues. Official league data provided under licensing agreements is what each of the leagues want sportsbooks to rely on for their statistics. One certainty is that legalized sports betting will increase the market for data, especially real-time data.

EVOLUTION OF 5G AND SPORTS IN THE CLOUD

With the evolution of 5G wireless technology. it’s faster transmission speeds can reduce delay for fans both at home and in stadiums.

These low-latency, high-volume communications are precisely the kind of connections that real-time sports bettors are likely to desire. And 5G is already being deployed in sports stadiums, sports bars, and other venues where such betting might take place. In addition to 5G, augmented reality and virtual reality (AR and VR) and OTT solutions stand to benefit from the rapid rise of sports betting.

Increasingly, it’s also likely that many sports applications will rely on 5G-enabled edge computing, a system’s ability to rapidly store, process, analyze, and act upon data at the edge of networks. By enabling data aggregation and processing at the edge (rather than a data center), leagues and teams can achieve bandwidth savings while also reducing latency and improving reliability.

For sports fans, this means they can get lightning-fast, real-time data—precisely when and where they need it. This includes near-instantaneous relay of cloud-computing data based on in-game adjustments made by managers and coaches. In-stadium fan experiences can be revolutionized as mobile devices provide instant replays, live-TV graphics, faster connectivity, and expedited food and beverage orders.

Monetization of 5G-enabled VR devices can allow fans to experience live games from virtually anywhere and with friends across the globe. Mobile devices will soon be able to match the latency and quality of consoles for esports. Hologram broadcasts are already being explored by some broadcast companies as a legitimate use case of 5G’s speed.

Service and streaming providers will be able to monetize higher-quality, immersive, and added-value broadcasts. Telecommunications providers may also have an opportunity to capitalize on real-time sports betting by providing high-speed links to gamblers looking for an edge.

Access drives consumption. The ease of access is undoubtedly tied to smartphones empowering consumers with an on-the-go tool that knows no boundaries. In an era where content is constantly churned out for the consumer, access is the first step to engagement. As sports viewing becomes increasingly part of the mainstream consumer and media landscape, sports conglomerates have started to build partnerships with leagues, teams and media companies.

Partnerships emerging between sports and media industries is expected to enhance the benefits brand loyalty already encourages. Content providers are also strategically releasing engaging material, fueling expectations for the ultimate access whether the consumer is at home, at the game, or anywhere at a time.

The world is at our fingertips, more so now than ever before. Consumers expect to create, embrace, and own their unique experiences feeding an insatiable appetite for a deeper connection to everything they indulge in. Spearheaded and enabled by technology, this concept of experience offers almost limitless opportunity to capture consumer engagement and secure brand loyalty for sport companies.

After all, consumer facing companies are in the experience business and, for sports, experience has long been multidimensional. A major player in shaping the modern-day mindset is fantasy sports.This shift in loyalty is only one reason why the lines between fantasy and reality in sports have blurred.

No matter how or where one engages in sport, the only common platform is mobile. For companies in the entertainment business, the equation to enhance the experience must now include a digital variable. Branded apps and mobile sites are now baseline for companies looking to engage with consumers, with each outlet striving for any degree of differentiation.

Social media is a key element in today’s experience-driven culture. For sports fanatics, it is imperative to monitor social media for all sports related content. Mass online communities providing intricate levels of insight are indicators of how leveraging social media can increase consumer tractions.

Social media has also revolutionized the fan relationship with athletes, leagues and brands. Of the major players, social media today is positioned strategically to act as a significant catalyst between consumers and the sports business.

With the advancement of technology and changes in consumption patterns, how sports as an entity is consumed is rapidly changing and evolving. There prevails a threat of new entrants disrupting sports rights wars that have been traditionally waged among network powerhouses, largely driven by reach. Live sports delivers viewers. It is DVR-proof. The potential to permanently embed sports viewing and consumption into the media ecosystem could forever change the game.