USB  (Universal  Serial  Bus),  as  its  name  suggests, is an external bus architecture to connect peripherals to host computer devices  which  are  USB  capable.  The  USB  was  formed  by a group  of  seven  companies  named  Compaq, DEC(Digital Equipment Corporation), IBM(International Business Machine Corporations), Intel,  Microsoft,  NEC and Nortel in  1994.

The  goal  was to make  it  fundamentally  easier  to  connect external  devices  to  PCs  by  replacing  the  multitude  of connectors at the  back of  PCs. USB  was mainly designed  to make  a  standard  for  connecting  computer  peripherals  like digital cameras, disk drives, keyboards, portable media players, printers,  network  adapters  to  personal  computers,  both  to communicate and to supply power.

The USB 3.0 specification was released on 12 November 2008. Within USB 3.0, there is a presence of  increased  data  transfer  rate  (up  to  5Gbit/s),  decreased power  consumption,  increased  power  output  and  most importantly, USB 3.0 is backwards-compatible with USB 2.0. Also, USB 3.0 consists of a new higher speed bus known  as SuperSpeed that is in parallel with the USB 2.0 bus. 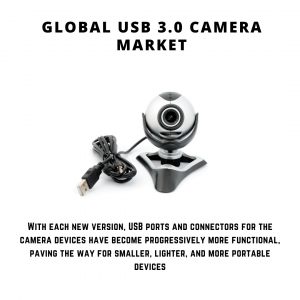 In  USB  3.0  within the camera segment as an interface is a  new  transfer  type called SuperSpeed or SS which supports almost 3 Gbps bandwidth for uncompressed image transfer whereas the high-speed USB 2.0 based camera supports only 480 Mbit/s.  So, USB  3.0 is  10 times faster than USB 2.0.  USB  3.0  has a  dual-simplex  four  wire signalling which means bi-directional data flows.

USB enumeration is  the process in which the host  detects that a USB  device  is connected  or  not,  identifies  which  device  is connected and then loads the relevant device drivers. The USB specifications have defined six different device states. This has been the latest technological interface and automation added within the 3.0 version as compared to the 1.0 and 2.0 versions.

USB 3.0 has formed the basic requirement of any camera operational system because it is the easiest way to make communication between a PC and external  peripherals  or any  two  end  devices  which supports USB like the interface setup between the Camera and Flash Drives.  Even this communication is fast and requires less power in comparison to  other  communication  techniques  because  of  its  power management technique.

The Universal Serial Bus 3.0 Specification Revision 1.0 was released in November 2008, with the first USB 3.0 device controller hardware was devised and launched into the market to fulfil this need of high-speed transmission and compatibility to accomplished levels of data requirements.

These layers include the connection between a host and a device or a hub and a device, link layer, which maintains link connectivity and ensures data integrity between link partners by implementing error detection and a protocol layer that manages end-to-end data flow between a device and a host.

USB 3.0 cables which are used within the camera devices as part of interface and transfer requirements, are also important to achieve the fast USB 3.0 transfer speeds. Currently the majority of 3.0 cameras include high resolution cameras, DSLRs, SLR and other web camera based operational elements. Additional devices like memory card readers, display adapters, and transfer cables which are essential in uncompressing and transferred levels of presence were launched in 2011, with more products expected in 2012 and later.

There is a doubling in the number of wires, from 4 to 8. Additional wires require more space in both the cables and connectors, so there are new types of connectors for the B Male and Micro B Male. These connector types are larger than the 2.0 equivalents to accommodate the additional wires and cannot be used with 2.0 ports. This helps in increasing the uncompressed formatting adjustments within the imagery and videos being recorded and analyzed.

The Global Market of USB 3.0 Camera can be segmented into following categories for further analysis.

In addition to the USB 3.0 Flash transfer rates requirements being fulfilled as part of speed and power consumption requirements of the various industrial segments based upon the camera usage and high-definition analysis, it can also be seen that its integration into various categories and modifications has brought upon the much-required levels of widespread usage capability.

In the ever changing technological need for high-speed capability, USB 3.0 cameras are being integrated with USB 3.1 advancements as an enhanced operable version. USB 3.0 Cameras are being compatible and sensory based advancement proof so as to have better uncompressed requirements being placed as the end product.

It is capable of data transfer speeds for imagery and video representation up to 10Gbps in the recent advancements as part of indigenised advancement , and while it can use the USB-C connector type, it can also use a variety of other connector types. To achieve USB 3.1 transfer speeds, your USB host connection, cables, and cameras must all support USB 3.1. USB 3.1 is also known as USB 3.1 Gen 2 (10Gbps).

While USB 3.0 cameras have been around since the recent years, USB 3.0 ports are not common, and this demonstrates how long it takes for modern camera hardware to adapt and mobilise its new requirements  to new protocols.

USB 4.0 which was announced in 2019, is aimed at providing significantly faster transfer speeds, better port usage, and ability to provide tunnelling of display ports and PCIe to external devices. This allows USB 4.0 devices to operate as PCIe devices, graphics display ports, and much more. These display ports are a formidable requirement for USB Cameras in the industry. Thereby its important to have the integration being advanced to USB 4.0 in the coming years, so as to have better accommodation of the high pixel resolution-based cameras for usage

The recent technological improvements have been towards development of varied classes of port slots and porting requirements which vary based upon their size and design modulation. There has been a recent development in the host controller-based slots for USB 3.0 operations.

The USB 3.0 connector is designed for USB SuperSpeed applications; however, it will carry data from slower speed connections, and it is backwards compatible with USB 2.0 ports. USB 3.0 A connectors are often blue in colour to help identify them from previous versions. This can be seen within the USB Camera connectors which are usually based upon the foundational requirements and analysis of the organisation to provision the difference in its camera products.

The USB 3.0 Cameras have been undergoing a major shift in its values of importance towards sensory, wherein CMOS image sensors cost less to produce than CCD image sensors, because existing semiconductor manufacturing equipment can be repurposed for their production.

Unlike CCD sensors that use high-voltage analogue circuits, CMOS sensors employ a smaller digital circuitry that uses less power and are in principle free from smear (vertical white streak in the image taken under bright light) and blooming (corruption of images such as white spots).

With each new version, USB ports and connectors for the camera devices have become progressively more functional, paving the way for smaller, lighter, and more portable devices. However, as new standards bring more speed, power, and versatility to market, they also bring a complex assortment of features and capabilities to consider when deciding which cable or peripheral is right for your application.

With USB 4.0 around the corner, there has been an invitation taken by manufacturers to begin the possible phasing out of older USB ports for cameras as these might not be able to generate the required transfer speeds. Therefore, to have better pixel-based resolution being transferred and transmitted at all times, it is important to have the improvisation and integration of the latest USB 4.0 being done in the near future.

Sony, which has been the ruling technology giant in the field of high focus and resolution cameras, has recently launched the SRG 120 DU model of USB 3.0 Camera, which operates on the latest technology of CMOS Semiconductor.

It is a remotely controlled PTZ webcam which can be connected to the Windows-based computer system for streaming and recording a t high resolution and zoom capabilities. The camera features a 1/2.8″ Exmor CMOS sensor to capture video resolutions up to 1080p60, and it provides wide dynamic range using Sony’s View-DR technology to compensate for backlight or changing light conditions.

The Electrical Manufacturing giant, Toshiba has launched the most recent product of 3 CMOS Semiconductor based HD video USB 3.0 Camera into the market. The camera features three 1/2.9”2.1 Megapixel progressive scan CMOS image sensors that can achieve a frame rate of 59.94 fps at full resolution.

A front panel freeze frame and long exposure mode up to 1 second (60 frames), makes the new camera configuration especially well-suited for scientific imaging and microscopy applications. The IK-HD5U camera is suitable for use in microscopy, NIR inspection, scientific imaging, and defence imaging systems.