Video On Demand (VOD) are systems which allow users to select and watch/listen o video or audio content such as movies and  TV shows at their convenience, rather than having to watch at a specific time. The growth of the VOD is having the most impact on traditional distributors of pay – TV or MVPDs (Multichannel Video Programming Distributors) whose subscribers’ growth in many markets has begun to decline. Rapid development of high speed internet infrastructure and increasing number of on-demand service providers are the major factors driving the growth of video on demand service market. There is estimated to be 3.5 billion smartphones across the world i.e. 45% of global population owns a smartphones. This has been the primary factor of rise in VOD services. Although, high bandwidth requirement and high subscription costs for some of the service providers are restraining its growth.

Over the past few months since the COVID-19 outbreak, the public has been kept in lockdown. The share of global population in lockdown has been gradually increasing as the number of countries enforcing home quarantine is increasing. Almost one third of the global population is in lockdown as of April 20th 2020. This has resulted longer screen time of public on mobile phones and other electronic devices that support streaming platforms. 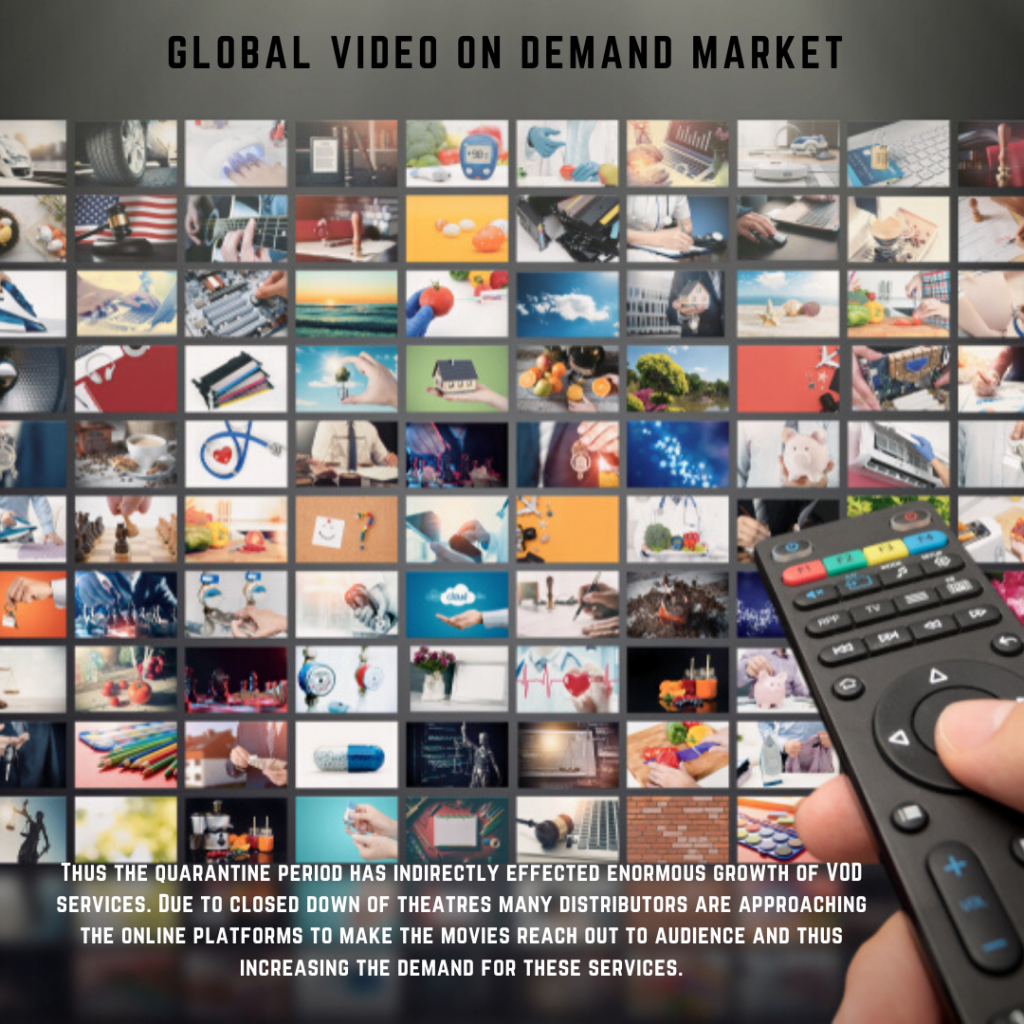 Thus the quarantine period has indirectly effected enormous growth of VOD services. Due to closed down of theatres many distributors are approaching the online platforms to make the movies reach out to audience and thus increasing the demand for these services. It has been estimated that there could be an increase in 60% in the amount of content watched in this period.

Pay per view VOD services one of the first of its kind in this sector still required a cable subscription. Since it allows only limited content to watch per payment these are getting outdated. Subscription is leading market in VOD sector. The rise of OTT (over the top) platforms such as Netflix, Amazon Prime, Hotstar and others has been the great driving force in this segment. Large number of contents and their accessibility are the reasons for their surge. The high price for subscriptions are hindering the growth

Ad-based VOD is the only segment which is mostly free for customers is visibly less revenue generating segment. The digital purchase involves buying of exclusive content and stored in cloud and can be accessed offline.

The below info graphic shows the share of different types of VODs in the global market based on the fee induced: 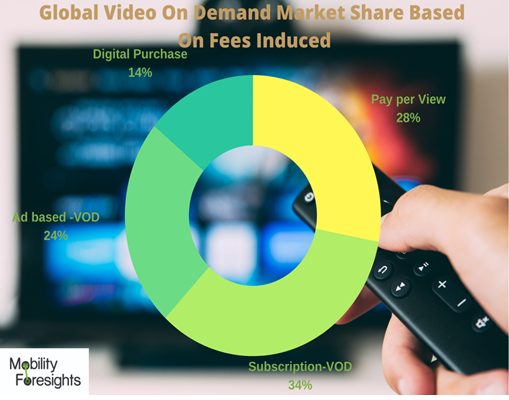 US VIDEO ON DEMAND MARKET

USA has been the largest revenue generating region. The shift of people from traditional cable and satellite network and increased number of high quality contents available on online platforms has attracted more people towards on demand services. The rise of US based streaming platforms is another major factor affecting the market.  During the ongoing lockdown period it is estimated that people are spending almost 6-8 hours a day with the media, hence there is a huge surge in the daily screen time of these services.

Netflix subscriber growth for Q4 2019 stood at 0.42 million domestic and 8.33 million international users, for a total of 8.76 million. This compares positively quarter-on-quarter to Q3 2019’s 6.78 million, despite US subscriber growth declining from 0.52 million.

By Feb 2020, Hulu had ~31 Million paid subscribers as compared to 61 Million for Netflix for similar time frame

Europe region has still been one of those where the pay per view and the rentals VOD segment is  market leading. There has been slow shift towards the subscribed VOD services. Since the lockdown, there has been a 30% increase in internet traffic. Disney+ was launched in late March and it has acquired 5 million subscribers taking global count to 30 million. 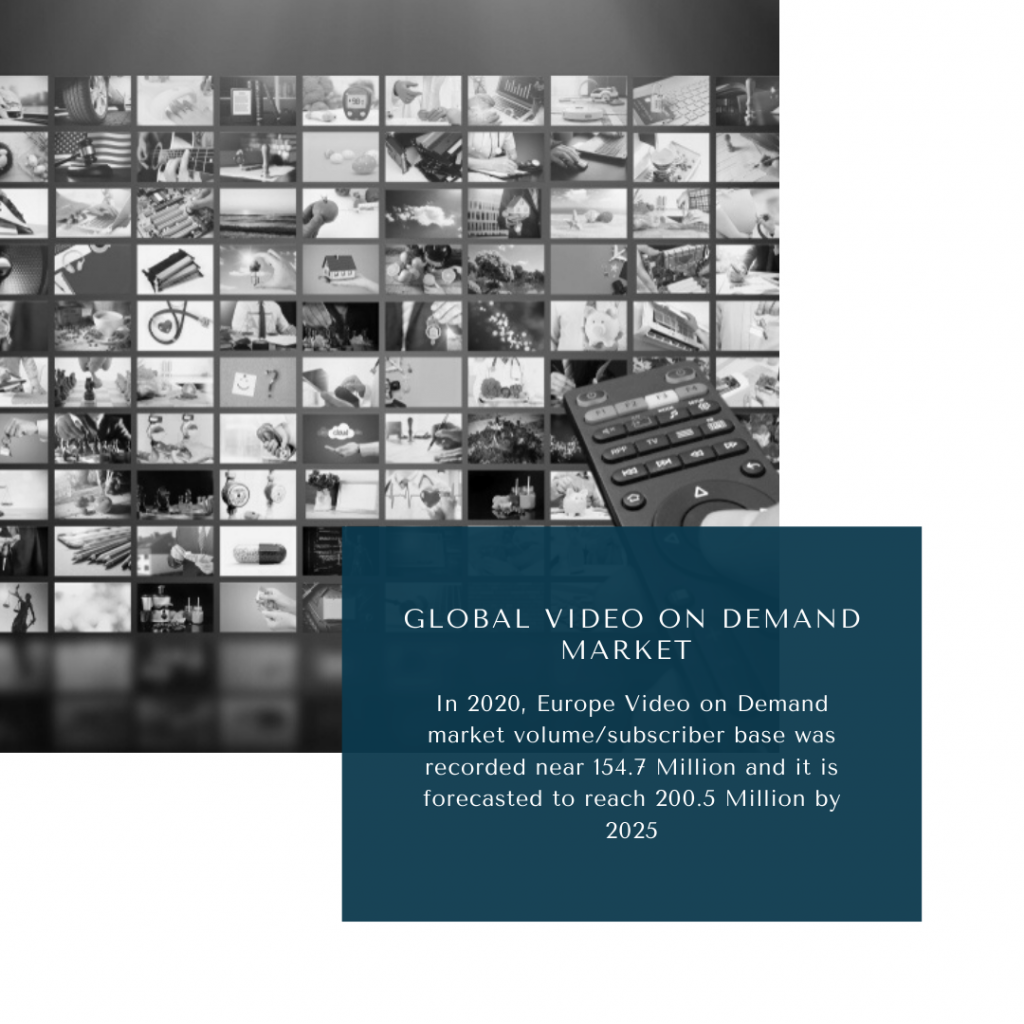 In 2020, Europe Video on Demand market volume/subscriber base was recorded near 154.7 Million and it is forecasted to reach 200.5 Million by 2025

Video on demand services had a late start in India . It was only in Feb 2015, Hotstar launched in India followed by Netflix in January 2016, and later followed by rival Amazon`s Prime Video in December 2016.

Now in a matter of 5 years or so there are 26 Video on demand service providers in India including regional players. Their income revenue comprises recurring subscription income and Revenue from advertisement for free users.

As connectivity improves in India, the digital video market is set to grow in size, reaching just under 370 million by 2021 – or 66% of video users.

It is a market on which Netflix is focused, however, with a reported $420 million earmarked for producing and licensing content in India (much of this content – such as much-loved Sacred Games has also travelled internationally). This includes a reported slate of 22 films and unscripted content. To know more about India Video on demand consumer trends, Please read our survey findings.

In April 2020, Balaji Telefilms which owns ALTBalaji is witnessed strong uptake of digital subscriptions with ~ 17,000 subscriptions added per day post 24th March 2020( national lockdown) , ~ rise of 60% MOM. The platform has over 1.9m active direct subscribers as of July 2020.

The number of users of on demand services is expected to reach close to 530 million as an after affect of coronavirus lockdown. National Film Bureau in China is emphasizing on strong supply of online streaming content so as to avoid instantly getting back to cinemas. 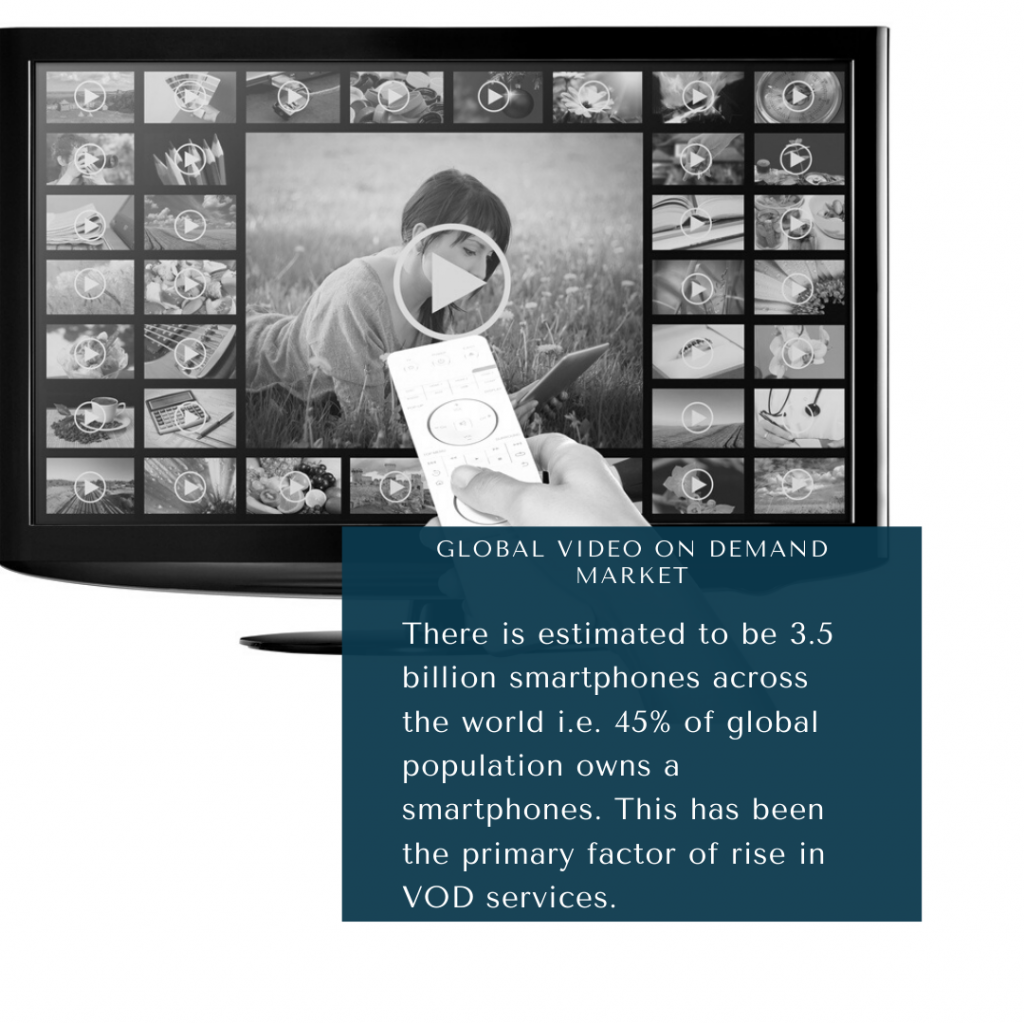 The pandemic has largely benefitted the VOD service providers across the world. However, there has been a sense of fear of reaching a saturation point if the period of lockdown gets longer. The major factor for this concern is the lockdown has inevitably shut the whole filming process there won’t be any new content to be premiered.

It has been estimated that there might be a chance of about 140 million subscriptions across service providers in 2020, which is about 18% increase in total subscriptions.

The global Video on demand market is estimated at $48 Billion in 2020.

Advertising (or ad-based) video on demand (AVOD): The AVOD model suits YouTube perfectly well as it has a massive audience. Users willingly wait for the advertisement to finish before they can watch the video of their choice on YouTube, which has become a household name. However, AVOD is unsuitable for new OTT market players, who are yet to create their subscriber base, as AVOD is driven by volumes.

The leading players in the VOD sector has been dominated by US based companies. Netflix, Amazon Prime, Hulu, Disney+, Youtube are all US companies. Netflix is currently the leading the market with most number of subscribers. Vudu content delivery company where the desired content can be bought or rented.

Netflix penetration will increase to over 50% in Latin America, and to over 60% in the US & Canada – with growth slowest in this region, where penetration is already reckoned as being above the half-way mark.

Viu (Hong Kong), iQiYi (China) and Disney+Hotstar (India) are the leading platforms having highest number of subscribers. Britbox (U.K) and Blim TV (Spain ) are the leading service provider in Europe.