A mounting weapon is a mounting device or mechanism used to hold a gun on a platform to work at full capacity. Weapon assemblies might be divided into two categories: static assemblies and non-static assemblies. An unsporting armed support component is a static mount, either attached on a fortification or part of a vehicle directly to the ground. Stable function requirements for the weapons transported are more required. Using new materials and methods, enough firing stabilization is achieved that cannot be achieved previously. If, at the conclusion of WWII, the ratio of one weapon to its mount was 0.4, this ratio currently exceeds 2 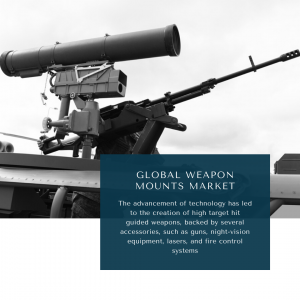 Current automatic weapons are characterized by the extremely small weight, the tiny size of the conveyance, mostly machines, grenade launchers and small calibre cannons, and are carried by two troops at the most. The arms are placed either on carts or bipods or tripods on wheel and track. Both transfer forces through their own components from the firearm to the ground. In every elevation and room angle, the structures need to provide a steady functioning.

When the bullet leaves the barrel muzzle, the weapon is steady to create the battery. The weapons must also have such speeds and accelerations as to guarantee the crew and equipment have adequate operating conditions. The gun may move and oscillate as it is being fired. But as the bullet exits the barrel the variations in the angle lower the chance of impact in the event of bursting.

The development of the fighting environment has resulted in the armaments being upgraded and modified thereafter. Innovators have spent enormous money developing advanced weapons systems due to the requirement for high-precision, lightweight and small arms. The advancement of technology has led to the creation of high target hit guided weapons, backed by several accessories, such as guns, night-vision equipment, lasers, and fire control systems.

Over the last decade, raw material prices have seen considerable fluctuation. Disputes between Contracting Parties on specific provisions of the defence, such as the technology clause, have therefore also resulted in the cancellation of projects that have been approved. A typical benefit of penetrating and destroying highly armoured adversaries is predicted to increase the market for light weapons. The growing geopolitical divide in Asia-Pacific, the Middle East and Africa have pushed governments to boost their yearly defence spending and budget to help modernise their weapons.

There have been increases in both U.S. military activity and marine presence in the seas, showing the country’s increased stakes in disputes that might, if not handled appropriately, convert parts of Asia’s maritime areas from thriving commerce routes to battlegrounds. Conflicts escalating across the world over commercial or military supremacy are likely to fuel demand for naval missile launch systems globally.

The Global Weapon Mounts Market can be segmented into following categories for further analysis.

Growing terrorism around the globe, unresolved border concerns between countries such as India & Pakistan, India & China, and North Korea & South Korea, weapons races between nations and national forces conflicts are some of the key drivers of the global guns mount industry. Reduced military budgets are nonetheless likely to impede industry development. Increased applications of weapons aboard naval ships are expected to offer profitable opportunity to major participants on the international weapons mountain market (Destroyers, Frigates, Corvettes and other).

There has been an integrated approach towards having a proper weapons mount and control system placed onboard land-based assets of the military. This includes the Naval, Marine and Air Assets of the military requirements. The technology has been developed in such a manner that all primary functionality is ergonomically presented, ensuring that Surveillance and Target Acquisition cycles are near instantaneous without the operator having to break visual contact with the Operator’s Display. Dual command facilitates shared capabilities, shorter response times and reduced sensor-to-shooter cycles.

There has been most recently seen through a video-based integration, wherein The Video Tracker Module can reduce the engagement sequence by as much as 50 percent, whilst allowing the operator to focus on finely adjusting the hit point so that selected areas of a target can be engaged with pinpoint accuracy. The further advancement has brought upon integrations such as the ammunition Feed From Below Armour can also be offered for certain weapon configurations. Sensor imagery from the Weapon mount system can be distributed via a Local Area Network and displayed where required inside the platform. This overcomes the loss of situational awareness incurred by removing  the gunner from the platform hatch or deck.

Rising maritime conflicts in the South China Sea and Mediterranean between various nations are driving investments in the acquisition and deployment of new navy warships. Currently, the naval forces are updating or replacing their old naval fleets with newer-generation warships as part of a modernization effort. As the need for additional naval vessels grows, so will the need for missiles and missile launch systems in the years to come.

FN Herstal has been part of the latest lightweight based mount development which is focused on better technological advancement. The FN® M3M airborne proven machine gun technology offers the most powerful weapon system for land and sea applications combining lightweight and compactness.

Fully mechanical FN® Light Multi Weapon Mount does not require any electrical power, making firing possible even if the vehicle faces electrical problems. The soft-mounted FN MAG® 7.62mm machine gun guarantees outstanding balance during firing, improved comfort, and higher accuracy. It operates on a full mechanical operational ability with no or minimal electric power used.  It is integrated with a Safety lever to prevent uncommand firing and also provisions high hit probability. The mount has a capability of 250 rounds ammunition box.

SAAB Defence Systems has been focused on development of the latest verge of mount systems working towards automated sighting and portable systems.  The track fire has been part of the required development featured mount and weapons station. Trackfire is designed for use on all types of military platforms including vehicles, vessels, and static emplacements.

The operator benefits from a fully stabilised, remotely operated weapons and sensor system which provides cutting edge performance irrespective of environment. It has been designed such that the weapon has a Stabilised Independent Line Of Sight (SILOS) enables maintaining line of sight on target that provisions better and Exceptional hit performance thus minimising ammunition usage and collateral damage.

Track fire is designed to integrate a wide menu of weapons and sensors. Including the stabilised weapon platform capability and SILOS function, this enables the operator to deliver a variety of effectors, irrespective of the environment, with cutting edge performance.

STS Gun Systems and Group has been taking into market, the most composite and lightweight based gun mounting systems. It has most recently designed the MK93 MOD Mounts, which has the capacitance of operation of the MK93 machine gun mount being accepted from the M2 series .50 calibre machine gun and the MK19 MOD3 40mm grenade launcher.

This is a buffered mounting system and is commonly used in conjunction with the Universal Pintle Adapter (UPA), and Traverse and Elevation Mechanism (T&E). Adapters are also available to enable the MK93 to accept M240/M249 and M60 series weapons.

The mount has eben designed in such a way that it accepts all weapon mounts with a standard Navy or Army pintle, the MK38 can be used as a basis for the integration of a wide variety of weapon systems. Ideal for ECP, vehicle and maritime applications, this mount can be used with or without the exterior support legs, depending on application and weapon system.