Wind energy is the extension of new generation technology implementation in the Energy industry wherein decades of implementation and manufacturing abilities have brought upon the full time usage of the Wind energy to produce high volumes of energy with one of the lowest atmospheric emissions pertaining to a low valued carbon footprint. 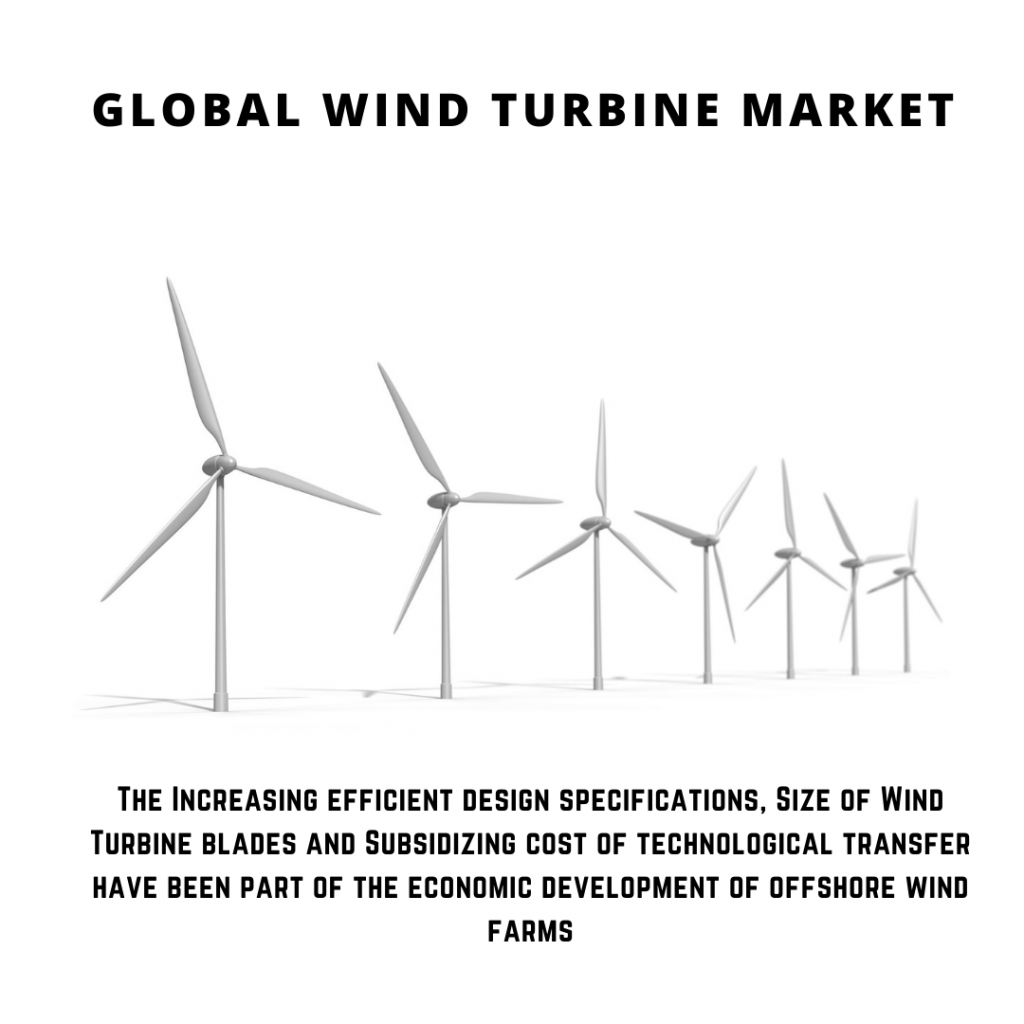 The essential working component of the Wind energy production is the Wind turbines which are differing in concepts and production capacities and manufacturing organization specifications.

The presence of low-cost material and technological advancements alongside lower market technology transfer purchases has made the wind turbine systems achieve the required enhancements and technological changes in mechanical engineering aspects to provide better and higher efficiency in comparison to the previous concepts of wind turbines systems.

The market of wind turbine extends towards in the direction of Power electronics and custom generators as part of electricity generation technology.

Wind Turbines can be part of electricity generation in various fabrication shapes and technologies with the usage characteristics and stakeholder requirement, thereby categorizing the wind turbines into 3 based upon the blade formation and geometric shape and design. The 2 Categories include Vertical Axis Wind Turbine and Horizontal Axis Wind Turbine abbreviated as VAWT and HAWT, respectively.

The VAWT is a class of wind turbine which is one of the first technologies to be used in 2000’s for wind energy propulsion with a low efficiency and power generation capacity alongside low wind capturing ability.

These are placed along the Vertical Axis and the main components involved in mechanical aspects of the turbine are placed at the bottom section of the turbine making the arrangement feasible for generator and gearbox placement for better servicing and maintenance coordination.

The major advantage of VAWT is the non-regulatory requirements of wind sensing and orientations mechanisms.

HAWT class of wind turbines are usually used in both offshore and onshore prospects with major usage being limited to onshore capabilities with land usage mainly aimed in Long and Distributed areas of wind flow. It usually is a Three bladed mechanism placed upright and in the direction of wind flow rather than in the transverse direction.

These turbines have the main rotor shaft and generator placed at the top of wind turbine placement tower with appropriate calculation to analyze the yaw and wind sensor arrangement. The gearbox enables faster and efficient rotor rotation for electricity generation at higher efficiencies.

These gearboxes are avoided in few systems due to the presence of permanent magnetic drive-based generators which requires rare earth materials usage and high maintenance costs alongside high fatigue possibilities.

The Concepts of Wind Turbine technologies includes 4 Concepts of developmental usage of turbines that are defined in varied speed control and power control abilities which forms the baseline for wind energy generation in the industrial sector.

The generator used in each of the aforementioned concepts vary in their capacities and generation capabilities giving rise to Stall Control or pitch control changes in terms of their power control ability in the wind turbines alongside their usage of Speed control as Fixed speed and varied speed characteristics in the generator and turbine design capabilities.

From the economic point of view, the Variable speed wind turbine concept with partial scale frequency converter are most economical in terms of their considered high usage in industrial manufacturing and yield outputs.

The Offshore turbine Installation market is one of the booming and potential usage areas for countries in Asia Pacific and the North America similar to the offshore presence of installations in the European region which holds around 84% of the Total offshore installation on the planet i.e. 15,000 Megawatts of Energy Capacity.

The Increasing efficient design specifications, Size of Wind Turbine blades and Subsidizing cost of technological transfer have been part of the economic development of offshore wind farms and are considered to be one of the most viable platforms of electricity and power generation with the cost decreasing to approximately 45 GBP per MWh of Electricity generation from the wind turbine from 120 GBP per MWh in 2016 due to the improved logistics support technologies and operation and maintenance costs.

The Studies in India have shown the capacity of offshore commissioning limited to Shores of Gujarat and Tamil Nadu considering all efficiency and economic factors of profit and power generation from the wind farms installed.

The Government has planned the country’s first Wind farm with commissioning capacity of 1 GW in offshore platform off the coast of Gujarat to be started in the year 2020 with the expression of interest being placed in for the Government of India by National institute of Wind energy.

This thereby gives rise to a much possible wind farm market in the country in the offshore platforms alongside the onshore installations giving rise to a possibility of one of the highest renewable energy generation countries in the region in comparison and tight competition with global leader of wind energy installation and manufacturing at the country of Republic of China.

The Wind Turbine market is one of the potential growing technological resource and development sector wherein the renewable energy resources-based energy production has been brought into action considering the decreasing technological costs and transfer potentials alongside the environmental effects and low carbon footprint generation in comparison to the solar and nuclear power generations.

In the year 2019, the Wind turbines production globally amounts close to 65 Gigawatts of Commissioned capacity and the top manufacturers of these turbines stand to be from Denmark, Spain, China, and USA which account for about 55% of the total commissioned capacity. Vestas Wind Systems A/S with the headquarters in Demark are the leading global wind turbine manufacturer with a revenue of 13 Billion Euros.

The turbines installed as part of onshore facility consumption amounts to about 88% of the total commissioned capacity and had noticed a jump in usage of offshore facility installation of Wind turbines by 4% to have a better energy usage and consumption facilities for offshore industrial locations.

Asia Pacific is the lead Installation site for the Wind turbines as compared to the global comparison with 31 Gigawatts of commissioning being done in this part of the planet which is around 48% of the total production.

The Forecast for the year 2020 was focused to be approximately 76 GW of New commissioning capacity installed in various parts of the planet and the market size estimated and valued was around 120 Billion US Dollars with the expected projectile of 134.6 Billion US Dollars by 2023 having a strong compound annual growth rate estimated to be 7.2% in the world.

In the year 2020, The Wind turbine market has been completely dominated in manufacturing pace by the Asia Pacific Region for being the largest manufacturing hub in the world and China being the top Wind power market on the planet.

Considering the present rate of investment and manufacturing efficiency in the country, India can be part of the exporting and manufacturing hub of Wind turbines since it has a potential market of 500 Million US Dollars per annum through exports of wind turbines form various private sector manufacturing firms and has plans to release incentives to exporters under MEIS Scheme which was done as per law in 2015.

The present wind energy potential present in the country is around 1000 Gigawatts at various hub heights but the achieved commissioning capacity to the present day is 40 Gigawatt which is less than 1% of the total potential thereby forming to be a proper efficient market hub for installation of Wind Turbines systems under various incentives and schemes of the Government of India as the country is pacing towards being an exporting nation in the next few days with the aim of Self-reliance and environmental protection legislations.