Yachts need lot less power to move on water as compared to cars on land. For comparison, as a rule of thumb, 3hp per tonne of displacement, is sufficient to move a yacht whereas a minimum 70hp per tonne is required for an entry level car.

The average power of yacht engines has been steadily increasing in recent years.  The yacht manufacturers typically equip their products with higher output engines so that they run at lower revs, being more economical and suited for long distance cruising 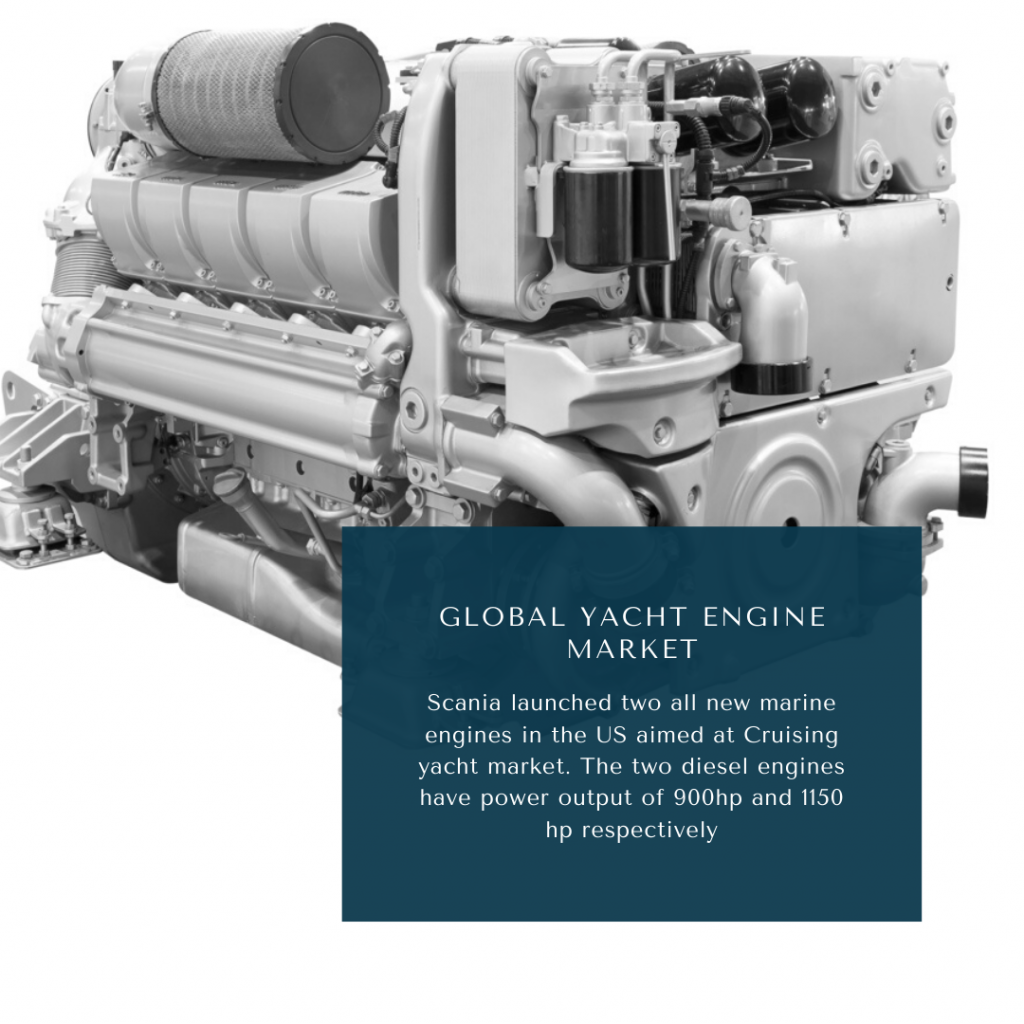 All yacht builders rely on a handful of European engine manufacturers for yacht propulsion solution. Sometimes the agreement or partnership can extend for multiple years and platforms. For example, In Oct 2018 Britain based Sunseeker signed a new framework agreement for the supply of MTU Series 2000 and 4000 engines for its 86Y, 95Y, 116Y, 131Y range of yachts.

Dual engine propulsion are very common on yachts over 40ft in length but Azimut raised the bar when Azimut S6 was launched in Dec 2019 with triple propulsion Volvo Penta IPS 700 system. The inherent advantages of triple propulsion units are improved fuel efficiency, reducing noise and vibrations.

Although, much of the market is still captured by Diesel engines, electric propulsion is also catching up thick and fast. For example,

Jan 2020-Germany based Torqeedo signed an agreement with Netherlands based Waterworld to distribute inboard electric motors in Europe.

July 2019– Volvo Penta signed a partnership with ABB, and the University of Chalmers to study solutions for rapid charging of dockside vessels

Aug 2020: Scania launched two all new marine engines in the US aimed at Cruising yacht market. The two diesel engines have power output of 900hp and 1150 hp respectively

Volvo Penta is among the global market leaders in yacht engine market. Till date it has sold more than 105,000 units worldwide. Volvo Penta is also among the biggest innovators with latest generation engines featuring Diamond Like Carbon (DLC) coating on the piston pin to reduce friction and increase durability. The common rail fuel injection system has higher pressure – 2,000 bar at par with automotive engines.

Rolls Royce owned MTU is also one of the leading yacht engine manufacturer. It is now offering integrated bridge systems – MTU Smart Bridge – for both series production yachts and mega yachts. It has developed integrated solution for IMO 3 consisting of propulsion system and SCR exhaust gas aftertreatment system which are optimally matched, designed for flexible installation and low on maintenance.

In Sep 2019, MTU said it will gradually introduce a range of completely integrated and modular MTU hybrid marine propulsion systems for production yachts with a power range extending from approximately 1000 kW to 4000 kW per powertrain.