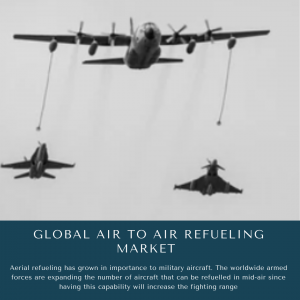 In 1921, a canister of gasoline was physically transferred from a Lincoln Standard biplane to a Curtis Jenny aeroplane in order to perform the first airborne refueling. The altitude requirements of thousands of feet in the air and have a hefty gasoline jug on your back as you jump from one jet to another. Soon, inventors had the bright notion of dropping a hose from a plane to another. Aerial refuelling has made it possible for receiving aircraft to fly large distances without making an actual landing.

As global tensions rise, governments are working to improve their air combat and support capabilities. Several countries are investing in modernizing or replacing their old transport aircraft fleets with newer models. The sector has seen many transport aircraft acquisition and upgrade operations in the last few years due to an increase in defence spending by a number of countries across the world.

Most nations are putting their efforts into improving their military might. Geographical difficulties, territory and border conflicts, and the need to upgrade military fleets with fourth- and fifth-generation fighter planes with greater payload capacity and range are all prompting militaries to beef up their arsenals. Currently, Automated Air-to-Air Refueling (A3R) is a concept in its infancy stage and different advancements are carried out to offer it to the market. For A3R to become a reality, more advanced control systems must be developed, including relative positioning systems, data connection systems, and aerial vehicle operations from a distance.

Europe has major capability gaps in air-to-air refueling. This was made clear during operations in Mali, Libya, and Kosovo, where European troops had to largely rely on US assets. The European Defense Agency is working on short, mid, and long-term solutions to this problem. A400M AAR capability, strategic tanker capabilities, and asset optimization have all been EDA’s focus.

The Global Air to Air Refuelling market can be segmented into following categories for further analysis.

The automatic refueling system works by having the air tanker’s air refueling operator approach and track the receiver at first, as normal. This location is then determined by using innovative passive techniques like image processing. When the automated system is triggered, a completely automated flight control system sends the boom towards the receiver’s receptacle. Usage of the ARO, relative distance-keeping mode, or full auto mode is done to perform contact with the telescopic beam inside the boom. Airbus’ Space division first employed the imaging technology that underlies the automated AAR approach to create satellite refueling or debris removal systems. Airbus Defense and Space’s Incubator Laboratory continued to develop and apply it for the tanking application, as well.

The other technology which has been brought into latest integrations onboard the aircraft refuelling probes is the Remote vision systems. The RVS is basically a suite of cameras, sensors and software that is supposed to allow boom operators sitting inside the aircraft to safety steer the boom into the aircraft needing fuel. But in certain conditions, the system produces distorted imagery that increases the risk of the boom hitting another aircraft.

However, refueling pods may be added to current aircraft designs if the “probe-and-drogue” method is employed, even if the aircraft supplying the fuel is specifically built for the job at hand. This activity has only been employed in military operations due to the high expense of the refueling equipment on both tanker and reception planes and the specific handling of the planes to be refuelled (extremely tight “line astern” formation flying). There isn’t any evidence of civilian in-flight refueling taking place on a regular basis.

Boeing has been pioneering in development of the aerial refueling or air to air fueling systems in the market development requirements to have better technological integration placed across the global scale of military operations. Most recently it has tested upon the MQ-25A Stingray, a navy unmanned aerial tanker prototype, was sent to the test by flying for two and a half hours with an ARS at the MidAmerica Airport in Illinois. Boeing EA-18G Growler, Lockheed Martin F-35C, and Boeing F/A-18 Super Hornet will all be served by the autonomous system. The development of self-flying aircraft, such as the next-generation unmanned system, will be useful for a variety of military purposes in the future. The aerial refueling systems market is expected to increase in the future years as more of this technology is integrated.

Lockheed Martin has recently made its entry into the transport cum refueling tanker system of operations which are focused upon military branch of requirements in the market. The LMXT is an Airbus A330 Multi Role Tanker Transport version customized for use by the U.S. Air Force. Upgraded communications enabling joint command and control across all domains, as well as enhancements to range and fuel-offload capabilities, are also part of the changes. The LMXT will have an open-architecture backbone that will allow additional communication systems to be added, as well as a multi-domain operations node that will increase onboard situational awareness to offer robust communications and datalink for assets throughout the force.