Automotive brakes have progressed from drum brakes on both front and rear setup to Front Disc and Rear drum in 1980s and moving on to All disc setup in late 1990s and early 2000s. Now integration of Electric parking brake to rear callipers has been a growing trend for past 5 years. 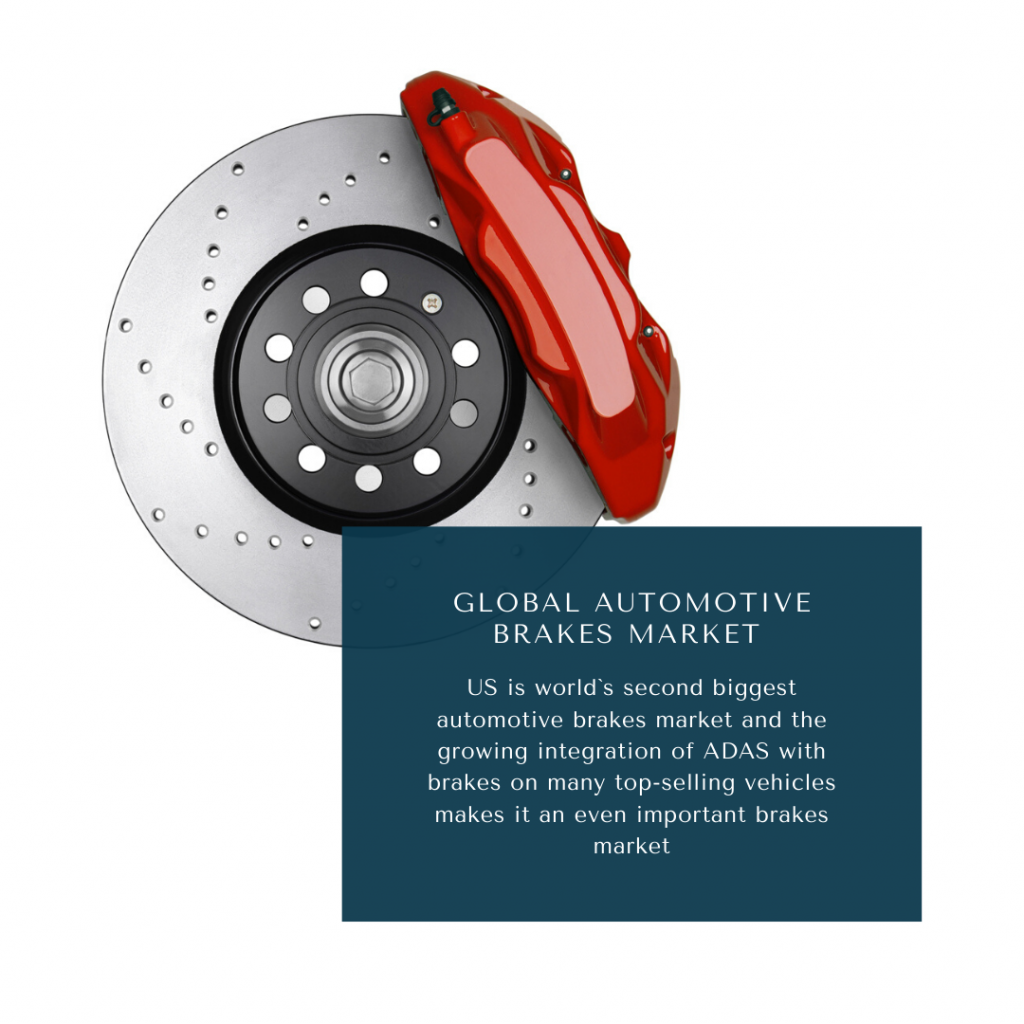 The Auto industry was already battling decline in sales since 2018 due to slowing demand from China, US and India until COVID-19 brought it to a standstill. The impact will be felt for a longer duration by auto manufacturers as well as brake market which is an integral part of the automotive industry.

Toyota offers an array of ADAS features (Safety Sense) as a standard fitment on Camry, Corolla, RAV4 among other vehicles. 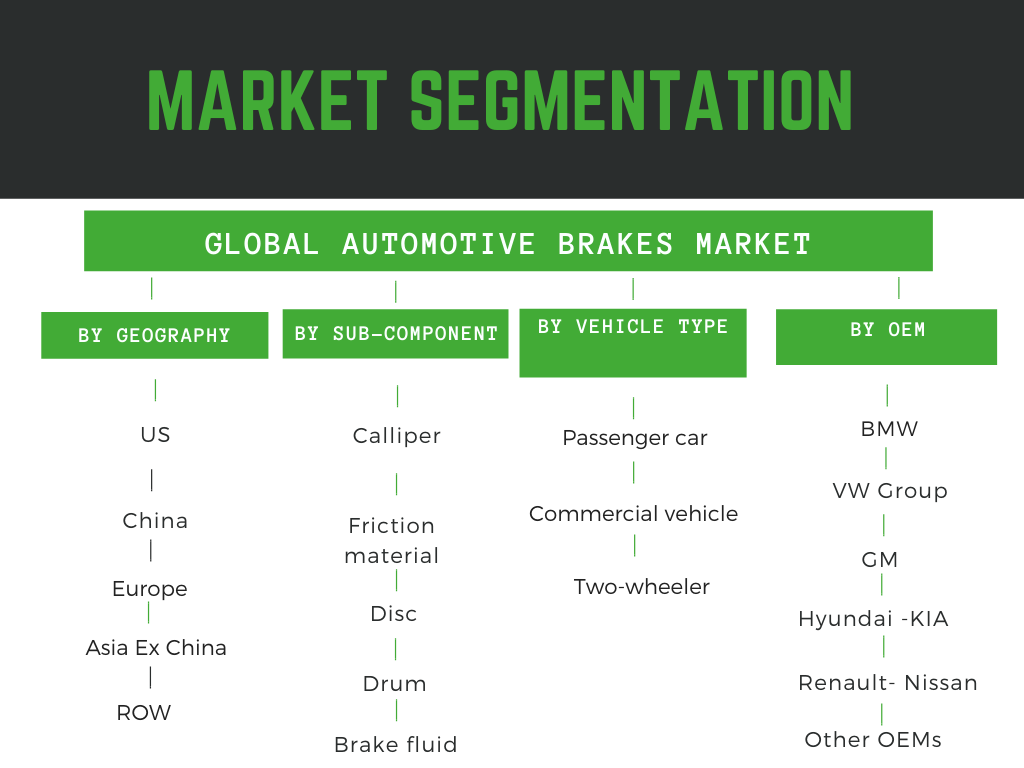 Europe with more than 20% share of premium cars in new car sales has all- disc setup on more than 80% vehicles sold in the region. 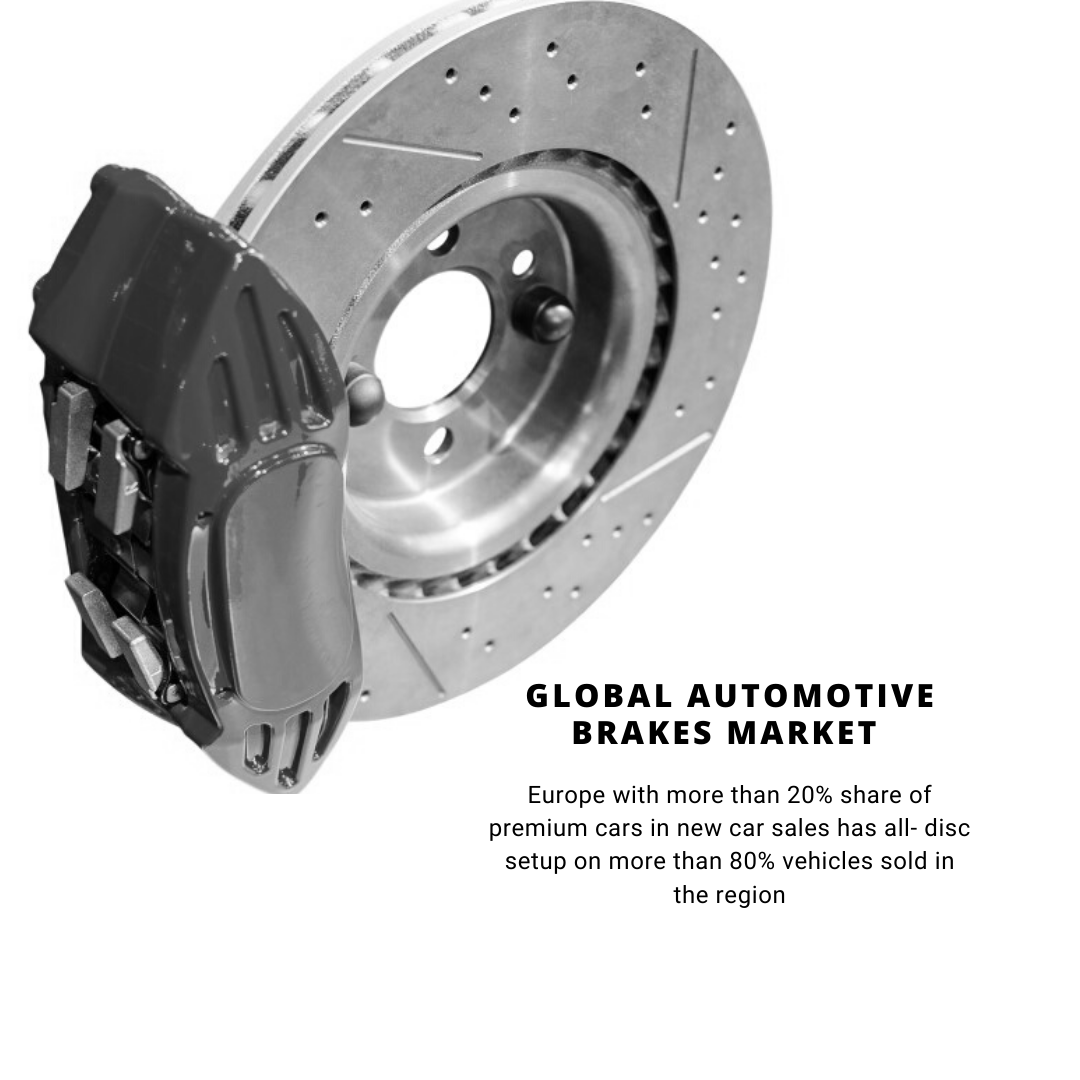 Among top-selling vehicles, A, B segment vehicles like VW Polo, Renault Clio get a Front Disc, rear drum setup on base and mid variants. Even, the higher variants along with Sports variants get an all-Disc setup with front ventilated discs in many cases. Citroen C3 gets a front disc, rear drum setup as a standard fitment though. The penetration of disc brakes at both sets of wheels are higher and there are few models with drum brakes fitted at rear.

Most of the Hyundai models had disc brakes at both front and rear locations. Toyota models have been equipped with “Collision Mitigation Braking System” is most of their models, along with standard electronic parking brake, rear cross traffic alert with automatic braking.

In many low-cost domestic compact crossovers, Front Ventilated disc and rear disc setup is a standard fitment. Front Disc, rear drum setup as preferred by many other emerging countries is not that common in China with the exception of Nissan Sylphy (only on base variant). 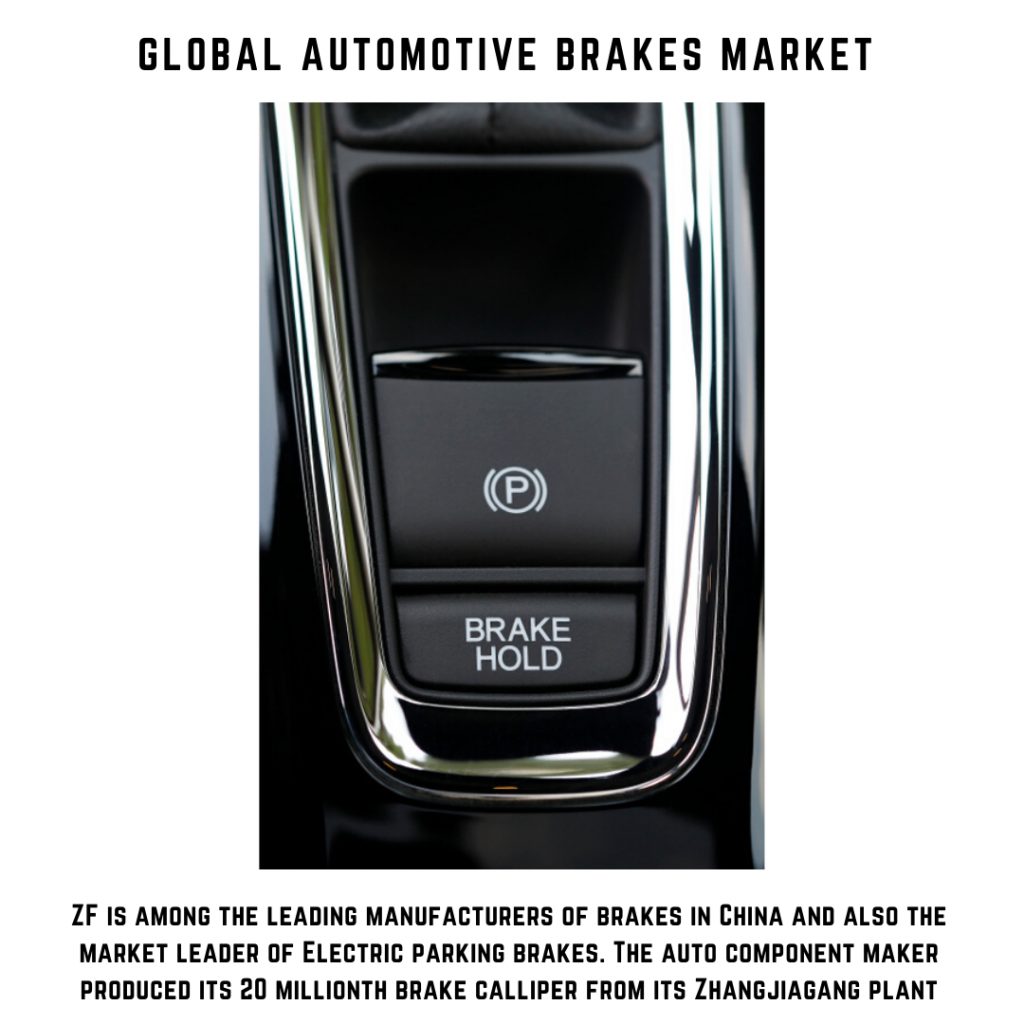 Many top-selling mid-segment vehicles like Toyota Corolla, Haval H6 and others have Electronic Parking brake as a standard fitment.

China is world`s biggest commercial vehicle market and like US and Europe, ABS is mandatory on all heavy trucks.

Hyundai, the second biggest market player in India offers almost its entire portfolio with Front Disc, rear drum setup. In 2009, Hyundai became the first OEM in India to offer all disc setup on a Premium hatchback with the launch of i20 but soon that setup was swapped with the ubiquitous Front Disc, rear setup.

In the top selling models like Kia Seltos and Sonet disc brake is standard fitment at front whereas, at rear disc brakes are option feature as drum brakes are standard.

In high volume MG vehicles at front & rear disc brakes are quite common and also electric parking brake is a common feature in these vehicles.

Most of the Tata models in India have disc brake at front & drum brakes at the rear, only exception being new Safari model.

Mahindra’s vehicles have disc brake standard for all the wheels in most of their models. At front it is mostly ventilated disc a calliper type. 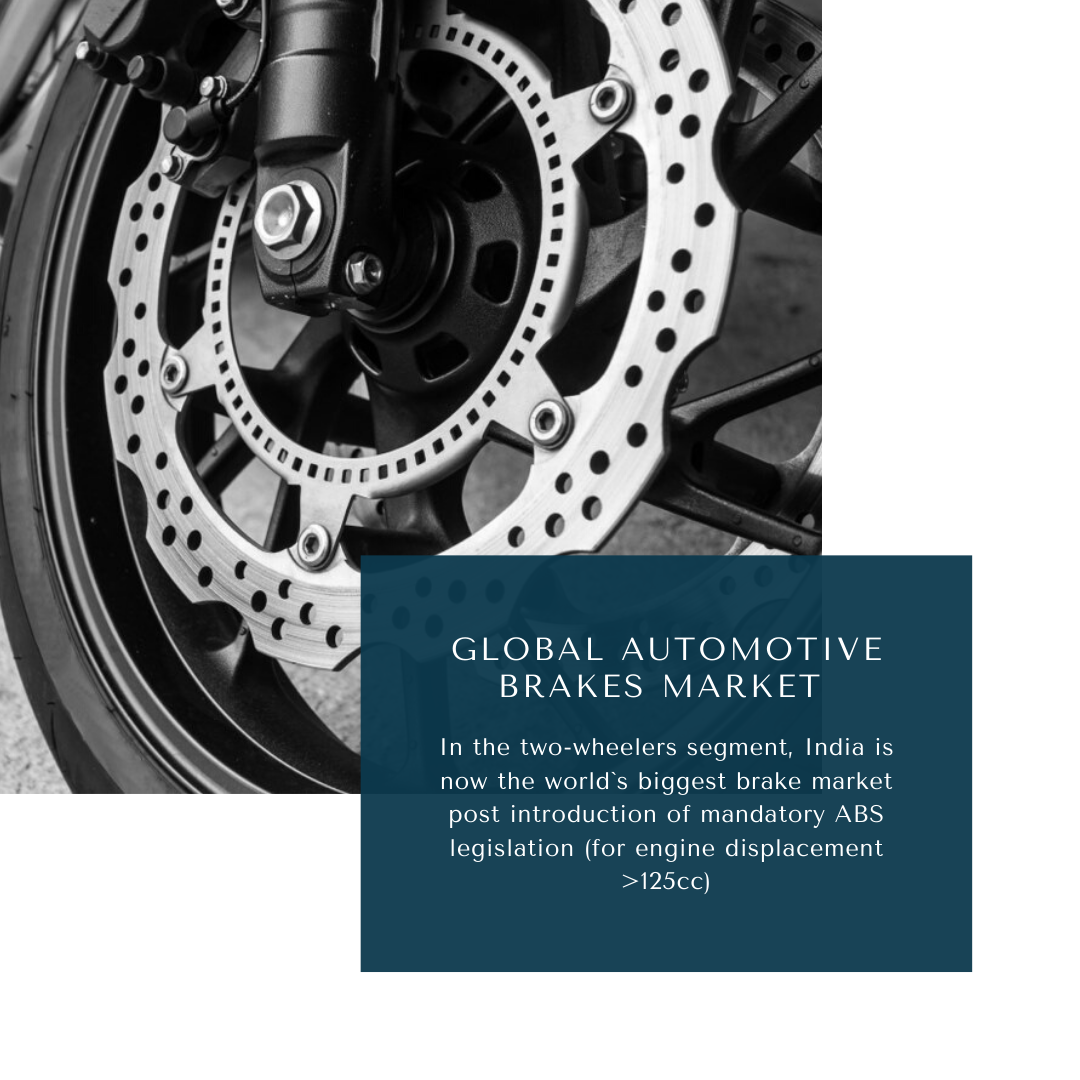 Electric parking brake feature is so far reserved for the premium segment only. As many ADAS features (Radar and camera based) are still not available in India, Brake by wire technology is yet to gain foothold in the country.

2022 Cadillac CT4-V and CT5-V high performance sedans will employ Brembo lightweight braking technology. This is the 4th generation of brake systems, where high-performance cast-iron disc system is standard on both vehicles, whereas carbon-ceramic brake system will be available on the supercharged, 668-horsepower CT5-V. The carbon ceramic brake package on the CT5-V Blackwing model will save 28.8kg.

Brembo has developed new Greentive Brake Disc, a solution that reduces the brake dust emissions due to its innovative coating. These brake discs are designed specially to meet the demands of premium and luxury cars.

ZF is among the leading manufacturers of brakes in China and also the market leader of Electric parking brakes. The auto component maker produced its 20 millionth brake calliper from its Zhangjiagang plant on April 20th 2020. More than 85% of the local production was aimed at local market and the remaining for exports.

In the light of COVID-19 we expect some M&A activity, especially from lower margin companies. Veoneer for example has already announced in April 2020 that it will sell its brake business to an unnamed US auto supplier.