Nearly a decade ago, airbag systems were mainly deployed in the luxury segment vehicles. Curtain airbags are placed at the front pillars, roof sides, and the rear pillars. It deploys simultaneously with the side airbag to protect the driver’s or passenger’s head, and it minimizes injury in the event of a side collision. 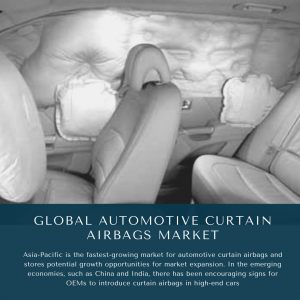 The rising concerns of consumers about safety, the increasing pressure from regulatory bodies and due to the intense competition in the market. Vehicle manufacturers have been offering a greater number of airbags in cars, due to which the usage of airbags has jumped up to three times in the last three to four years.

Almost every new car that has been launched in the last couple of years has at least one airbag (driver side) while some also have curtain airbags, especially in the developing countries.  Therefore, curtain airbags have been majorly deployed in SUVs and Vans compared to other vehicle types.

The stringent rules and regulations put in place by governments across the globe is expected to raise the growth of the airbag market. For instance, in the US, the National Highway Traffic Safety Administration (NHTSA) has established several regulations for all of the vehicles to incorporate curtain as well as side airbags.

Similarly, the Indian Government has also imposed rules to promote road safety by incorporating front airbags in vehicles from April 2021. The government of India has also proposed a new rule for the standardization of minimum 6 airbags in all passenger vehicles.

In India, the number of cars that have incorporated a minimum of 6 airbags are approximately 77 including all the model variants with add-on features. The best selling cars with 6 airbags are the Kia Seltos, Hyundai i20, Hyundai Creta, Hyundai Venue and the Tata Harrier.

There are 7 airbags in mid-priced models like the Mahindra XUV300 and Toyota Yaris.

Asia-Pacific is the fastest-growing market for automotive curtain airbags and stores potential growth opportunities for market expansion. In the emerging economies, such as China and India, there has been encouraging signs for OEMs to introduce curtain airbags in high-end cars. The high adoption rate of passive safety systems and the rapid growth of the automotive industry support the growth of the market studied in China.

The COVID-19 pandemic has caused several industries to roll back their production and manufacturing activities due to the lockdowns and pandemic protocols put in place by governments across the world. The supply chain operations have been disrupted as raw materials and most importantly electronic semiconductors for the automotive industry have been in backlog due to the lockdowns in China and Taiwan.

The outbreak of COVID-19 had a negative impact on the sale of passenger vehicles due to the halt in production and globe lockdown during the second quarter of the year 2020. However, as the countries started to open and resume activities, the automotive industry recovered as the demand for vehicles increased and production also increased.

With the rise in the sales of vehicles incorporating the rules and regulations imposed by the transport ministries of different countries, automakers are increasing the incorporation of airbags in vehicles to improve the safety of passengers. Luxury brands that manufacture vehicles with the rising concerns about the environment have seen a rise in demand for electric vehicles which in turn increase the incorporation and demand for new airbag technology.