Whether gasoline or diesel the highest priority in an automobile must be to keep the fuel far from being ignited and fuel tanks play a crucial role in that. Many leading manufacturers are investing on developing the multi-layered high density polyethylene fuel tanks which results in low permeation to minimize fuel hydrocarbons. These fuel tanks are environmental friendly and meet the government requirements. But, growing demand for battery electric vehicles worldwide will restrain the growth. 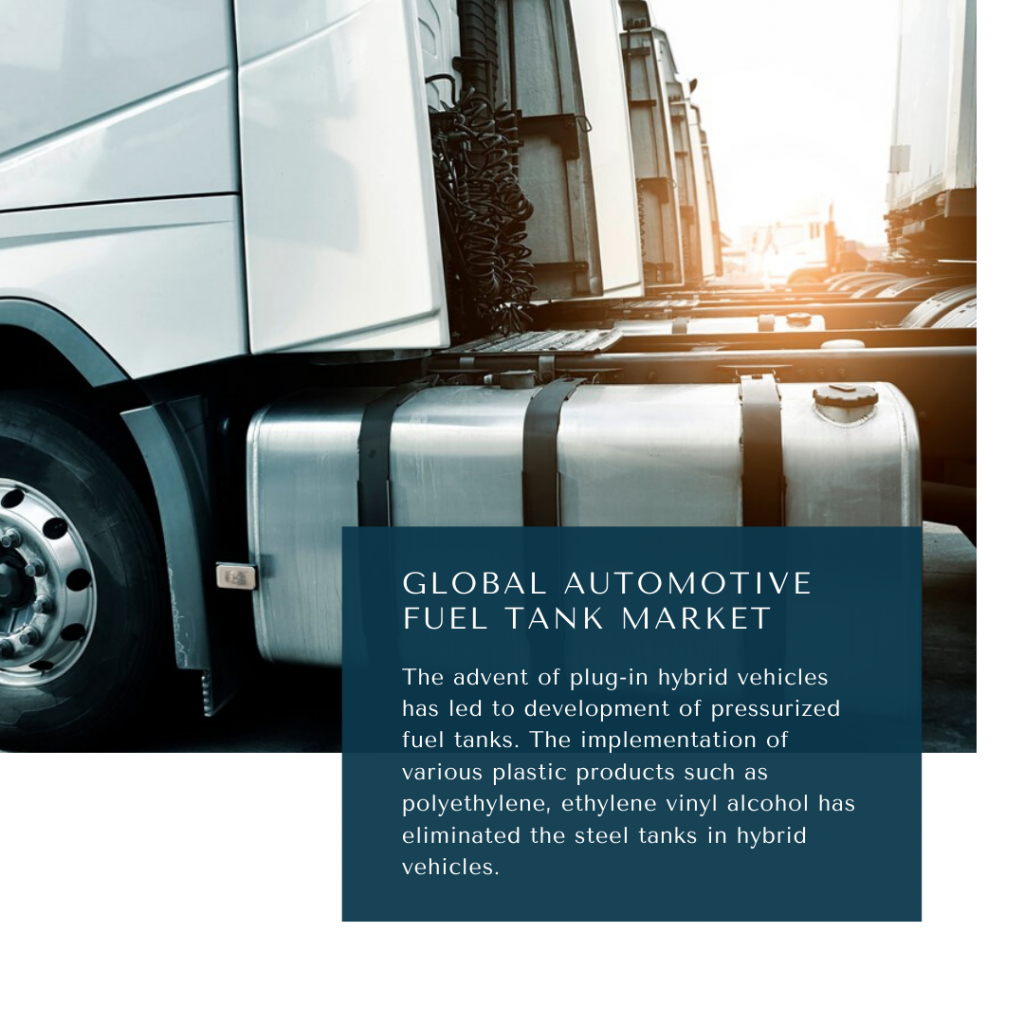 The advent of plug-in hybrid vehicles has led to development of pressurized fuel tanks. The implementation of various plastic products such as polyethylene, ethylene vinyl alcohol has eliminated the steel tanks in hybrid vehicles. Manufacturers are implementing latest technology to meet the high standards such as internal venting systems and anti-slosh elements (to reduce the noise inside the tank). The most common segment is 45-70 L segment where it is dominated by the passenger cars Sedan, Hatchback, MUVs, Premium and Luxury Vehicles. Europe and China markets are skewed in favour these segments. In US owing to greater number of pick-up trucks which are close to even 120 L in case of AWD trucks, is dominated by 70+ L capacity tanks. India has the highest number of vehicles with sub 45 L tank capacity.

A shift from metal (steel and aluminium) is witnessed in the recent past. The plastic’s ability to act as insulator to heat and less chance of igniting the fuel and more importantly they result in better fuel mileage due to the amount of overall weight of vehicle being reduced. These factors have made the plastic to be the leader in the segment. Polyethylene tanks are the highest gainers in the market. However, the plastic tanks are concentrated in the 2 wheelers and certain passenger cars. The aluminium and the steel remains the primary option for the trucks and buses. Steel tanks are the ideal option for diesel vehicles to meet the low evaporative emission standards.

The passenger cars across the world are dominated by 45-70 L segment. Among these the hatchback, sedans and even SUVs in many countries fall under this category. The commercial vehicles’ range is broadly varied. The light commercial vehicles have an average capacity of 100-120 L. Among heavy commercial vehicles buses attract larger fuel tanks than trucks and in US buses with more than 900L are witnessed. 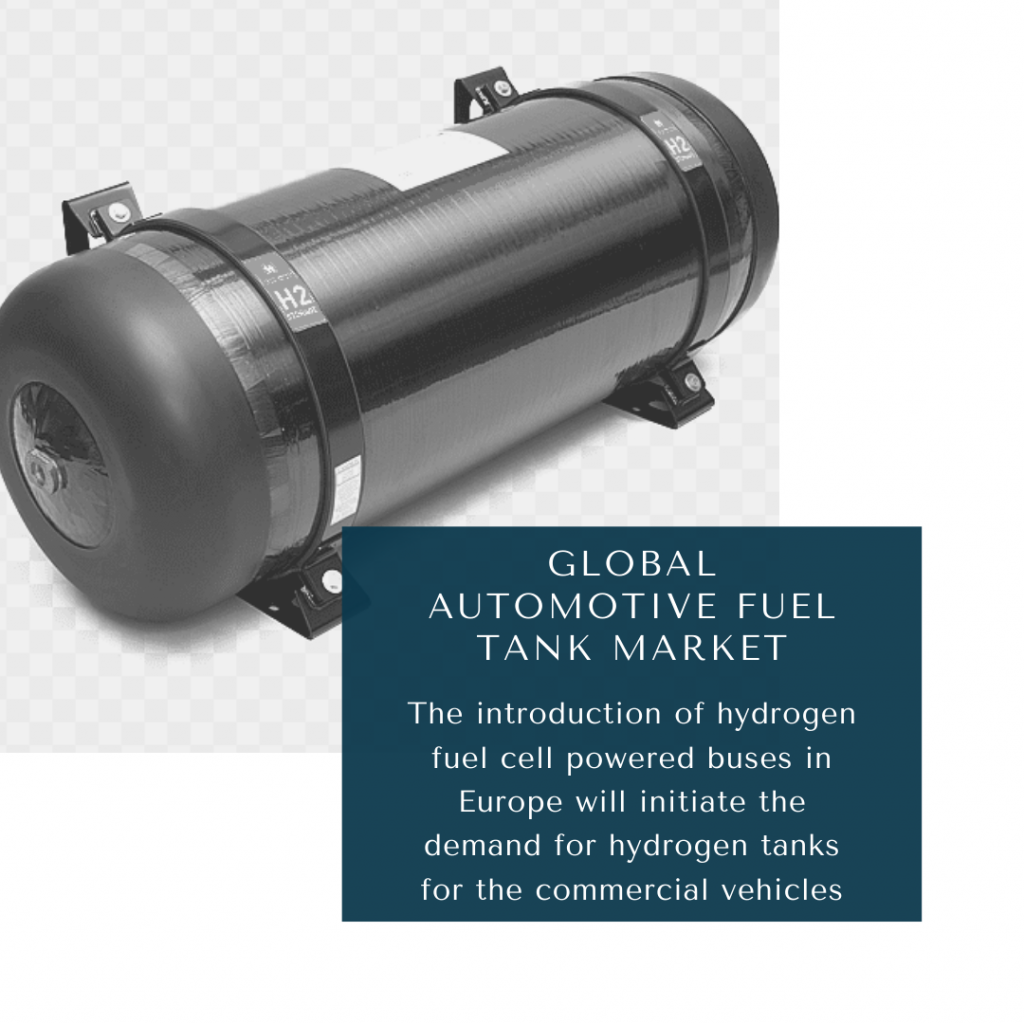 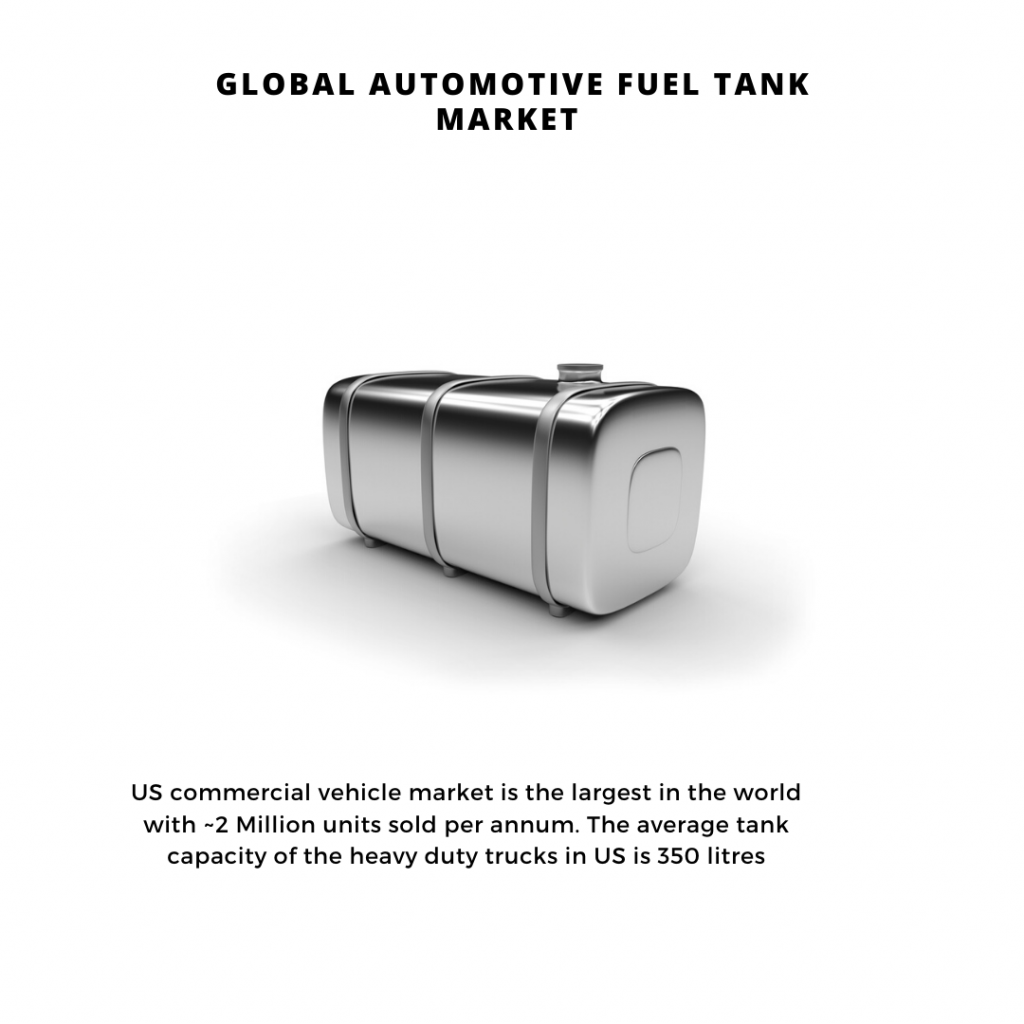 US commercial vehicle market is the largest in the world with ~2 Million units sold per annum. The average tank capacity of the heavy duty trucks in US is 350 litres. All these factors collectively have made US the leader in the fuel tank market by value.

The top selling cars have the capacity in the 45-55 range. The rise in EV vehicles sale in Europe in 2019 was close to ~40%, the highest in the world. Out of which ~65% were the BEVs. This will restrain the fuel tank market.

Chinese top selling cars all are on average having a capacity of 50L fuel tank. Exception being Haval H6 powerful SUV tank capacity going up to 70L.

China accounts for almost 50 % of EVs in the global market. 81% of overall EVs sold in China last year are BEVs; this will limit the fuel tank growth in the region.

In India 5 of the top 10 selling cars in India is having sub 45 litres fuel tank capacity. India accounts for the highest amount of 2 wheelers in the world. The fuel tank is on average 5.5 litres for scooter and 12 litres for motorcycles.

Manufacturers are adopting fiber patch replacement technique in addition to the existing fiber reinforced plastics. This is expected to significantly increase the lightweight potential.

The introduction of hydrogen fuel cell powered buses in Europe will initiate the demand for hydrogen tanks for the commercial vehicles. The hydrogen fuel under high pressure requires modern technology and modern materials such as carbon fiber, nano materials to contain the hydrogen. This will boost the R&D in the fuel tank sector.

Although Fuel cell is still an unproven technology in terms of mass scale commercialization, it has been increasingly seen as a practical alternative to costly high capacity BEVs. The obvious benefit being less than 10 minutes refill time. Some of the companies that produce hydrogen fuel tanks are Plastic Omnium and Cevotec (Germany).