The whole system is a combination of components such as control panel, telematics device, and head up display but the main component of system is the infotainment head unit that concentrates the infotainment functions of the vehicle, including tuner reception, media connectivity, audio playback, navigation, and human-machine interface. 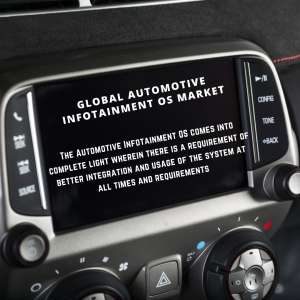 The Automotive Infotainment OS comes into complete light wherein there is a requirement of better integration and usage of the system at all times and requirements. To give the possibility to install third party apps also based on the geography of the market target to improve user experience. For example, apps for navigation with high resolution 3d maps, with high-speed route calculation and real time traffic management.

It is also useful to have GPS, this plays an important role in navigation but not fundamental because navigation still working even without GPS signal thanks to dead reckoning technology (which allows to calculate the current position using a previously determined position and advancing that position based upon known or estimated speeds over elapsed time and course).

QNX is a Unix-like real-time operating system (RTOS) developed by BlackBerry that is used mostly in the embedded systems market. It’s been implemented into things like in-car control panels, medical devices, and routers.

The major automotive companies are now focusing on developing the software ecosystem rather than the hardware manufacturing systems. Tesla also boosts the price of FSD software which the company incorporates in its vehicles while continuously reducing the vehicle hardware cost which will promote the development of the automotive softwares.

Automotive Grade Linux (AGL) is a Linux Foundation Workgroup dedicated for the creation of open-source software solutions for automotive applications. This collaboration involves automakers, suppliers, and technology companies with the target to accelerate the development and adoption of a fully open software stack for the connected car.

After the development of Android Auto standard, the system for the synchronization between Android mobile devices and compliant IVI systems, Google has developed an Android-based operating system that fully integrates with the car’s on-board computer systems. It is an expansion of its Android Auto project into a full-fledged IVI stack.

The Global Automotive Infotainment OS Market can be segmented into following categories for further analysis.

By Class of Vehicle Propulsion

By Tyre of Management

The COVID-19 pandemic has negatively affected the growth of several industries across the world. The automotive industry has also suffered due to the lockdowns imposed by countries which have halted the manufacturing activities. Due to the pandemic and halt in the manufacturing activities, several companies started to enact new automation technology that offsets wages as well as increases efficiency.

After the pandemic, the automotive industry began to recover and has witnessed an increase in the investments continuously. The pandemic has increased the interest of companies in voice control and recognition softwares. The IoT and AI enabled voice recognition and assistance softwares are on the rise of development and keeping the industry afloat.

Over the last years, the automotive research community was mainly focused on the popular field of research known as autonomous driving. The increasing requirements for better technology within the infotainment systems of the automotive alongside the possible integration of new features are to be operated using a possible Operating system requirements in the vehicles.

The automotive infotainment industry is currently pressured with many challenges. Tier-one manufacturers must accommodate disparate and quickly changing features for different carmakers. Moreover, the use of a dedicated platform for each brand and model is no more viable.

The use of an open platform would permit sharing costs across the whole customer spectrum, and it will allow products to grow and adapt to the user preferences, by providing the possibility of executing third-party applications.

Google Android is the operating system, designed for mobile devices that perfectly fits embedded devices such as those used for automotive infotainment. The GENIVI Alliance has recently been established between leading automotive manufacturers, tier-ones, silicon vendors and software providers with the purpose of collecting requirements, developing common architectures and reference implementations for the development of standardized and open platforms for IVI.

As regard IVI systems they develop the QNX CAR Platform for Infotainment that is a set of software components with all the functions needed to support the automotive industry to create connected infotainment systems with principal automotive technologies.

The Global Automotive Infotainment OS Market has been propelled by the In Vehicle Automotive based infotainment systems are one of the most expensive and most aligned parts of the automotive which attracts the vehicle user towards better experience in driving and better technological integrations to be connected to in the near future. This has in recent years seen considerable technological advancements due to its increased levels of integration and informative technologies being inclusive for better requirements.

In the year 2020, LG Electronics and Cerence incorporation which is an automotive voice recognition solution provider based in the US signed a partnership to develop an infotainment system based on the web OS auto based IVI system. The system is set to be equipped with voice recognition features.

Tesla has expanded partnership with Samsung to develop a 5-nanometer chip which will power the company’s autonomous vehicles. The company’s infotainment system (IVI) incorporates several chips which include microcontrollers, processors, neural-network processors (NPUs)  as well as security integrated circuits and display driver IC.

Continental AG recently released the half-yearly financial report for the first half of the year 2021 with the sales worth $23.7 billion which was an increase from the previous year which reported $19.5 billion for H1 of 2020. The sales of the automotive technology department was $9.2 billion for the same term, an increase from the H1 of 2020 which reported $7.9 billion worth sales.

Denso Corporation recently released the first quarter results for the fiscal year 2022 with the total consolidated revenue of $12.3 billion which was a 77.3% increase from the previous year same quarter. The company also stated that the revenue has significantly increased due to the recovery in sales of vehicles and production activities from the COVID-19 pandemic.

The leading manufacturer of automotive technology, Visteon recently announced the fiscal results for the second quarter of the year 2021. The company recorded net sales worth $610 million which was a whopping 59% year on year increase from the Q2 of 2020 reporting net sales worth $371 million.

Qualcomm Incorporated announced the acquisition of NUVIA, a leading CPU and technology design company, by its subsidiary Qualcomm Technologies for $1.4 billion. With the acquisition, the company has plans to integrate the next generation CPUs across a wide variety of products such as digital cockpits, smartphones, laptops as well as ADAS systems. The company also announced the third quarter financial results for the year 2021, with revenue worth $8,060 million which was a whopping 65% increase from the revenue of the same quarter of the year 2020 recorded as $4,893 million.

One of the leading suppliers of advanced automotive technology, systems, and components, Denso provides a wide range of automotive infotainment systems. Its voice-automated infotainment system is already being used in Ford automobiles. Denso’s products are also known for their customized touch-screen layout and ability to download apps like Flickr, Facebook, and Pandora.

Part of the Alps Group, Alpine Electronics is a major developer, manufacturer, and seller of audio products for automobiles. The company’s aftermarket solutions are popular and widely adopted worldwide. It has developed a receiver that is compatible with Apple’s latest CarPlay infotainment offering, thereby increasing its growth prospects. The company has also collaborated with multimedia playback, streaming, and media management major Cinemo GmbH to provide advanced infotainment systems.

Rogers Corporation in the recent years brought on board various live technological integrations wherein the company has made a major alignment towards inclusion of Telematics and enhanced intelligence integration. With enhanced intelligence and connectivity, automotive telematics systems and infotainment applications are increasingly complex. Telematics control units connect vehicles with the outside world, enabling high speed internet access and access to car manufacturers’ entertainment and service offerings. Real time traffic information, location based services and emergency call are examples of the latest in-car digital living space.