As automobile buyer continue to seek better performance, efficiency and productivity, automakers are constantly working to offer high performing vehicles. A turbocharger plays crucial role in enhancing the overall performance of the vehicle, hence there is a need for continuous improvement of turbocharger. Automotive turbocharger market players are focused on increasing the capabilities of next-gen turbochargers. The continued growth of turbocharging technologies will be driven by requirements for manufacturers to meet End users towing requirement and not global environment regulations. The downsizing of engines in the industry has been going on for past 11 years. This results in shift from large naturally aspirated engines to smaller turbocharged ones in less than 3L engine segment.

Many V6 and V8 engines powering pickups continue to remain naturally aspirated though.

Ford with 56% turbo penetration leads the market in US. GM has about 40% penetration. FCA (Fiat Chrysler Automobiles) with 10% penetration is the least among the leading OEMs in the American market.

Europe still remains the global leaders in the turbo market. Turbo penetration of Europe is close to 75%. Major European OEMs like BMW, Mercedes and Volkswagen use turbocharged engines in more than 85% of their vehicles. Since a typical engine in Europe has 1.2-1.5L engine, the customers feel the urge to improve the performance of the vehicle and this boosts the turbo sales in the European market.

Emission regulations in China are getting stringent and the need for the turbo charged engines to tackle this situation has become significant. Due to smaller engines, usually < 1.6L capacity, turbo penetration in China is above 40% significant increase when compared to last few years.

China is termed as fastest growing turbo market globally. Honeywell Turbo Technologies has been supplying turbochargers to leading manufacturers such as Yuchai, NAVECO and Jiangling Motor. 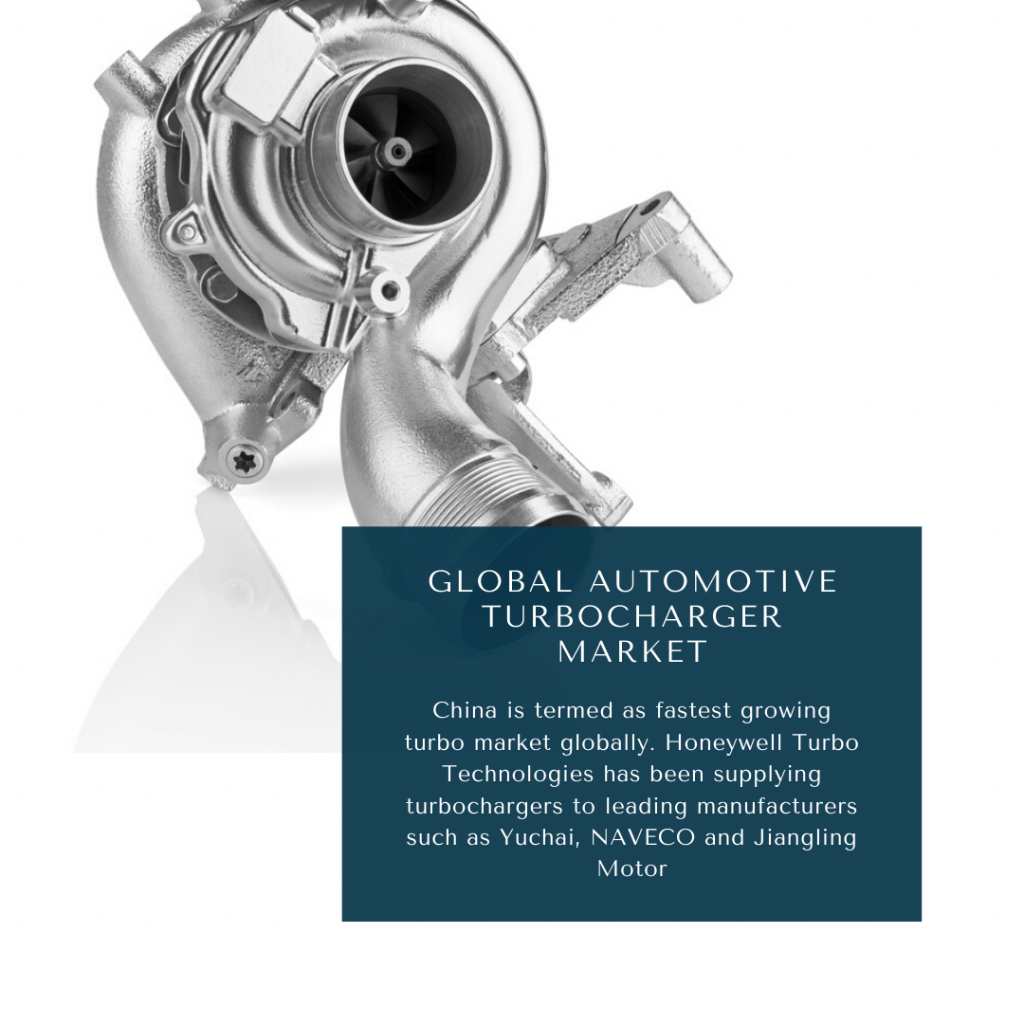 One important point worth noting is that the market leader in China, VW offers two best-selling vehicles with naturally aspirated MPFI engines i.e Lavida and Sagitar.

Among domestic OEMs Haval and Changan have equipped most of their top-selling vehicles with turbocharged gasoline engines.

Due to low excise duty on small cars with engine <1.2 petrol and <1.5L diesel is also pushing the turbo penetration, as OEMs can deliver higher power with the smaller engine.

As difference between gasoline and Diesel retail prices continue to shrink, there is a significant shift towards gasoline engines resulting in higher demand for gasoline turbochargers. The fast-growing sub-4 metre SUV segment now has a Diesel: Petrol split of 65:35 (2019) as compared to 75:25 in 2018.

Turbochargers in petrol vehicles is gaining prominence thanks to improved fuel efficiency and reduced emissions.

MARKET BY TYPE OF TURBOCHARGER USED 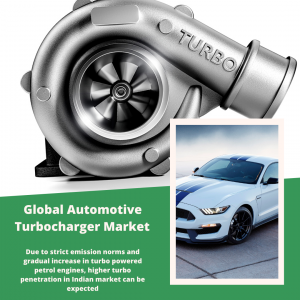 In US market, Turbocharged diesel engines will continue to be in demand on light duty trucks. By the ongoing trend further downsizing of the engines can be expected.

Due to strict emission norms and gradual increase in turbo powered petrol engines, higher turbo penetration in Indian market can be expected. 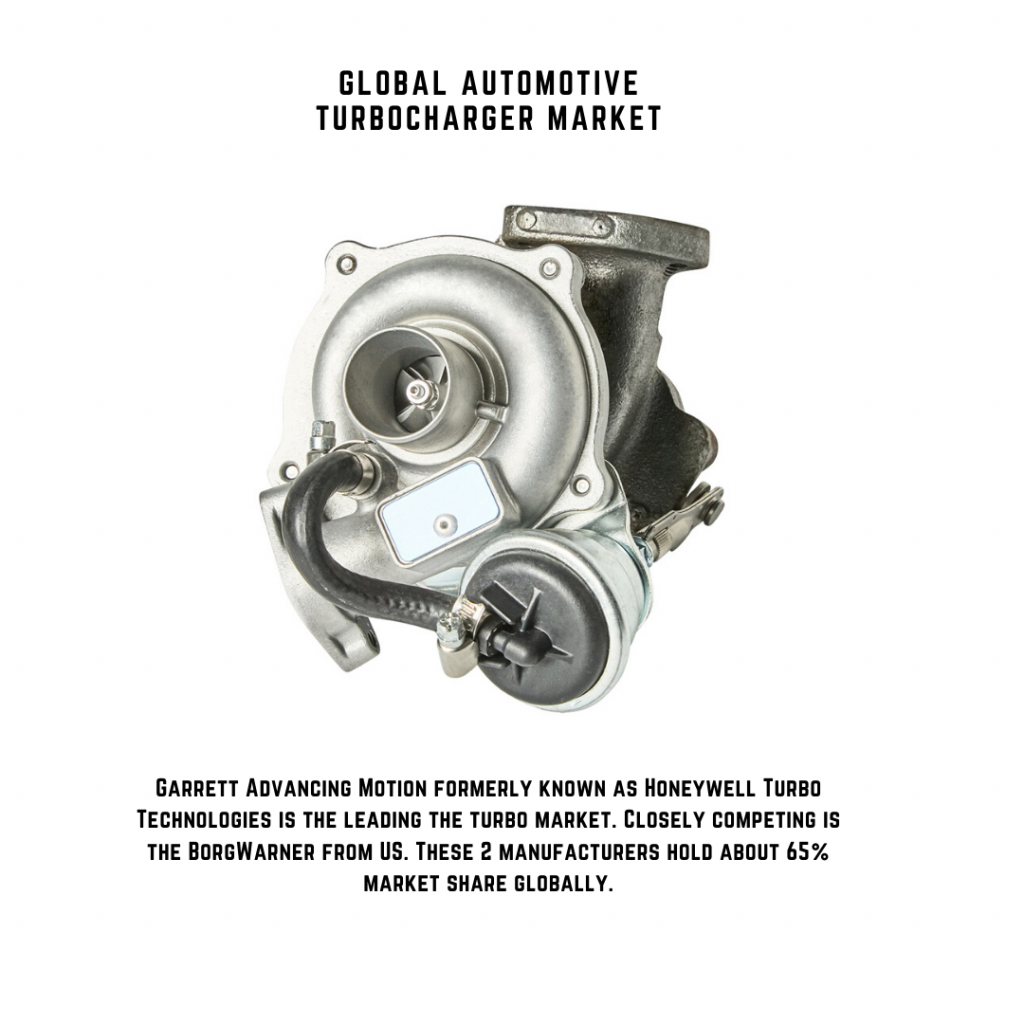 COVID-19 is already having a serious impact on global Auto production and sales and it is no different in case of Automotive turbocharger market. Garrett`s two production plants remained shut for the duration of the lockdown and re-started production in Late March 2020.

The global Automotive turbocharger market is estimated at $XX Billion in 2020, will grow at 4% CAGR till 2026. Gasoline turbochargers segment expected to grow at double digits till 2026

The Global Automotive turbocharger market is extremely consolidated. Due to high complexity and Robust R&D requirement in close so-operation, the threat of new entrants has always been low. There are six major Tier-1 manufacturers who supply turbochargers to the OEMs. The market is dominated by US manufacturers.

In Aug 2021, BorgWarner signed a global agreement with a major European OEM to supply its eTurbo, electric turbocharger for use in a high-voltage hybrid passenger vehicle. The company believes that their innovative electric boosting technology will improve fuel economy and performance while also allowing the company to comply with more stringent pollution laws. This will be the first time the company’s electrically assisted turbocharger has been used in a high-voltage hybrid car.

Sales of turbochargers for light vehicles represented approximately 24% of the BorgWarner’s sales in 2020.

Garrett Advancing Motion formerly known as Honeywell Turbo Technologies is the leading the turbo market. Closely competing is the BorgWarner from US. These 2 manufacturers hold about 65% market share globally.

BorgWarner has consolidated its EGR and Turbo business for cost reduction and Product differentiation. It has also developed an E-turbo along with 2 European OEMs which will be launched by 2022-23.

Garett witnessed an increased penetration of gasoline turbochargers in China in Q2 & Q3 2020 owing to new product launches. The volume remained under par in Europe & American regions. The diesel turbo sales volumes in these regions were even flatter.

All Garett’s GTX model plants resumed the production in May 2020 itself. Mercedes-AMG to launch new hybrid powertrain featuring Garrett’s E-Turbo.

It is observed that turbo penetration continues to outpace global auto production.

In 2019, Garrett grew its gasoline turbocharger business by more than 25% YOY due to higher uptake of gasoline engines and decline in Diesel engines. To counter the possible decline in ICE vehicle sales, Garret has already developed a Fuel cell compressor which can be supplied to multiple Fuel cell-based transport applications.

As OEMs continue to increase the electrification due to the ongoing vehicle electrification trend, turbocharger suppliers will have to expand their offering to include E-Boosting technology.

At the end of 9 months in FY-2021, IHI witnessed a 16% slump in overall sales Y-o-Y. Full-scale economic activity in China has resulted in a rebound in automobile-related demand. Gradual recovery in the number of deliveries in the U.S. and Europe markets helped the company to recover sales in auto segment, while there are concerns about the impact of city-wide lockdown accompanied with the re-spread of infection.