Turbochargers are centrifugal compressors that are powered by an exhaust gas turbine and used in engines to increase charge air pressure. All major engine characteristics, such as fuel efficiency, power, and emissions, are influenced by turbocharger efficiency. Before delving into the intricacies of turbochargers, it is critical to first grasp a few essential principles. A turbocharger is a device that uses a solid shaft to connect a compressor wheel and an exhaust gas turbine wheel to increase the intake air pressure of an internal combustion engine. 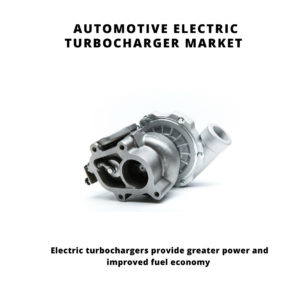 A turbo consists of two sections connected by a shaft. On one side, hot exhaust gases spin a turbine, which is linked to another turbine, which sucks in and compresses air into the engine. Because more air can enter the combustion chamber, more fuel can be added for more power, which is what gives the engine its increased power and efficiency. In addition to the increased power, turbochargers are also referred to as “free power” devices since, unlike superchargers, they do not require the engine’s power to operate them.

A turbocharger is powered by the hot and expanding gases that exit the engine, thus there is no loss on the engine’s net power. Rather than being the major source of boost pressure, electric turbos are currently utilised to augment traditional turbos, effectively decreasing or eliminating turbo lag. The electric turbo, when used as a “fill-in,” is only operative during transitory circumstances, implying that a small and inexpensive battery can be utilized and recharged quickly enough to meet demand.

Turbochargers are essential components of off-road vehicles such as construction trucks and agricultural tractors. According to industry analysts, low horsepower tractors do not have turbochargers installed, but virtually all high horsepower tractors do. Alternatively, turbochargers are planned to be installed in almost all construction equipment. Because electrification in OHV machinery is expected to remain limited for at least the next 4-5 years.

Various countries throughout the world have taken significant steps to minimize emissions and reliance on non-renewable energy supplies. The turbocharger contributes substantially to the reduction of vehicle emissions. Using a turbocharger decreases the displacement volume of the cylinder, reducing the volume of fuel required for the same output and, as a result, lowering the vehicle’s exhaust emissions. It also improves fuel economy. Because of these factors, the demand for the usage of turbocharger technology has increased.

Because of the removal of turbo lag, electric turbochargers provide greater power and improved fuel economy. It has several advantages and presents less technological problems. It also reduces the need for maintenance and cooling oil. Because of the numerous advantages that e-turbo has to offer, as well as the growing need for improved fuel efficiency and power output, it will have a greater market penetration in the future years. As pollution standards become more stringent, OEMs are turning toward CNG or alternative fuel cars, especially in big commercial trucks. Despite the fact that the use of alternative fuel cars is still restricted, benefits such as improved fuel economy and cleaner energy.

The Global Automotive Electric Turbocharger Market can be segmented into following categories for further analysis.

A turbocharger is built to last the same amount of time as the engine. It does not need any special maintenance, and inspection is confined to a few routine inspections. The turbocharger operates at 150,000 RPM when the engine is operating between 2,000 and 6,000 RPM.

The increasing trend has been through the development of architecture which has an improvised version of adaptability and enhancement. This is aimed at removing the constraints available on conventional turbocharger requirements. Electrifying a turbocharger removes the constraint of needing a small turbine with excellent efficiency to drive the compressor at low flow rates. Instead, it allows us to right-size the turbine for Lambda 1 rated power.

There has been an integrated technology approach which provides a balanced solution that delivers the additional functionality of Energy Recuperation (Efficient energy Management / Positive effect on state of charge SOC). Any penalty in inertia can, therefore, be more than compensated for by an electric motor and the addition of a wide-range Compressor to improve low-end response and extend high-end performance simultaneously.

With the Mercedes AMG entering into the electric turbocharger requirements, it has established itself into development of Formula racing based innovation, which is aimed at providing a much higher rate of air flow. The new turbo, electric motor and power electronics system are connected to the combustion engine’s cooling circuit. This technology is aimed in a manner that enables higher torque at lower engine speeds, leading to optimized acceleration capability from standstill and enhanced agility on a longer haul of duration.

Its purpose is to transform electrical energy into mechanical energy. Alternators serve an important role in keeping a vehicle’s different functions functioning at the same time, and they are always under pressure to accept new features. Producers must stay abreast of the rising technology and intelligence in automobiles in order to maintain their position as alternator manufacturers.

Garrett Industries has been developing a varied level of turbocharger for the Electric automotive focused approach which has been under push into the market to have enhanced motor suppression and efficiency of operations. The Garrett marked E Turbo is focused on adding and integrating the electric motor with the turbocharger.

At low speeds, the motor can quickly spin up the turbo and develop boost, resulting in exceptional low-speed torque and driveability. As the exhaust pressure rises, it assumes control of the e-turbo. Engineers can utilize a bigger compressor and turbine for higher boost, allowing for a lower engine displacement. The bigger wheels on the turbo would typically create additional reaction lag, but the electric motor eliminates that issue. The e-turbo layout also has another benefit. When the driver lifts off the accelerator pedal, the exhaust gases and inertia of the wheels keep the turbo spinning for a while.

Valeo System has made its footprint into the supercharger and turbocharger segment of operability wherein the focus is completely on emission control from the vehicular propulsion.

Valeo is the first automotive supplier to provide its clients a variety of electric supercharger systems that improve engine dynamic response at low rpm while maximizing combustion engine performance. Unlike turbochargers that are powered by exhaust gas, an electric supercharger (powered by an electric motor) responds instantly. This increases engine torque at low rpm, decreases turbo lag, and enhances acceleration. This innovation also enables the downsizing of combustion engines, an important factor in reducing fuel consumption. In a 12-volt architecture, fuel saving of 8% to 10% is reachable.