The primary function of the seating system is to accommodate and provide comfort for the passengers. 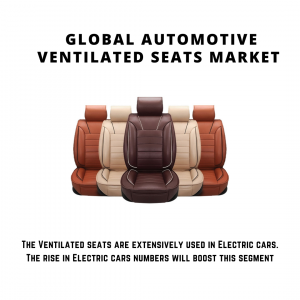 Drivers feel fatigue after long tiring trips and thus the comfort of seats while driving becomes paramount. Over the years OEMs have addressed these issues by introducing various features such as automatic seat adjustment, seat adjustments in multiple ways, seat ventilation and massage seats.

Currently, ventilated seats are not just limited to luxury cars which was the case a few years back. OEMs around the world have started to include this feature in their budget models too.

US is the leader in the adoption of ventilated seats. More than 50% of the cars sold in 2020 were equipped with driver heated seats. This was followed by Japan which had approximately 46% penetration in the segment.

Position wise, Driver seats are the first-choice position where the seat warmers and ventilators are adopted. The adoption of ventilated seats in rear position has increased in the last 2-3 years. US followed by Europe has the higher penetration of rear seat warmers.

However, in markets such as India, Latin America and Indonesia the seat ventilation technology has still not been accepted gleefully, as the penetration in these regions have been negligible.

Out of the top 10 selling OEMs Ford had one of the highest penetrations for driver heated seats in the world. This was followed by FCA vehicles (now Stellantis) with about 48% penetration.

Ventilated and heated seats features were equipped in most of the variants in SUVs. and were less popular in Pick-up trucks. The climate-controlled seats for the 2nd row were common in SUVs and was found in few of the variants of pick-up trucks but was not to be seen in top selling sedans.

In the premium segment, almost every variant of the top sellers had the feature of driver and passenger seat ventilation.

In Europe, except for some of the budget models of Dacia and Fiat, rest of the top sellers were equipped with driver seat ventilation.

Due to the geographical conditions, the percentage of heated seats are much higher than that of ventilated seats.

Among the major 4 markets, China had the least penetration of heated seats among its top sellers.

In China, cars of the foreign OEMs had the seat ventilation feature whereas the domestic OEMs like Wuling, Changan, Baojun and Geely had included this feature only for its high-end models.

1 out of every 2 Toyota’s cars in Japan featured the driver heated seats. The penetration of heated driver seats was more or less the same among other OEMs like Honda and Nissan in the country.

In India, there were just 2 models equipped with the driver seat ventilation feature. Hyundai’s Verna and Kia Seltos had just a couple of variants in its line-up with the feature.

Latin America, very much like India had very few models among top sellers equipped with this feature. Vehicles like Toyota Hilux and Hyundai Crete were the only 2 models equipped with driver heated seats.

The Automotive Ventilated Seats Market is estimated at $XX Billion in 2020.  It is estimated to grow at XX% CAGR in the period 2021-2026.

Unlike a few years ago, almost every brand has a couple of affordable models equipped with rear seat warmers today. The trend is expected to grow further. In Japan, where MUVs are present in significant numbers, this will drive the feature. The presence of more vehicles with 3rd row seats in the country will boost the adoption of this feature.

US based Lear Corporation and Adient PLC are the market leaders in the automotive seating sector.

Gentherm is a leader in thermal technology as they develop heating, cooling, and ventilating seats for various other tier-1 suppliers. US companies Lear, Adient and Gentherm cumulatively accounted for ~XX% of the market share.

In 2020, sales for Lear Corporation dropped by ~14% mostly due to 20% drop in vehicle production in North America.

Japanese supplier Tachi-S is the first-choice supplier for Japanese OEMs Honda and Nissan.