The primary function of seating system is to accommodate and provide comfort for the passengers. With the increase in demand by customers for more comfort and luxury OEMs and tier 1 manufacturers are striving hard to meet the requirements of the customers. Seating system also plays crucial role in safety of the passengers. Airbags are incorporated within the seats and this demands for smooth seat function. The US car market is dominated by pickup trucks and premium car market(2M units per annum) is one of the biggest in the world.

Many top selling US car are have either Powered/climate controlled seats to keep the passengers warm in extreme cold conditions. The rear heated seats come as an option in these cars. As of May 2020, 8 way driver powered seats are a standard fitment on at least 44% of new vehicles sold in the country. US had the highest penetration for 10 & 12 way adjustable driver seats than any other region. 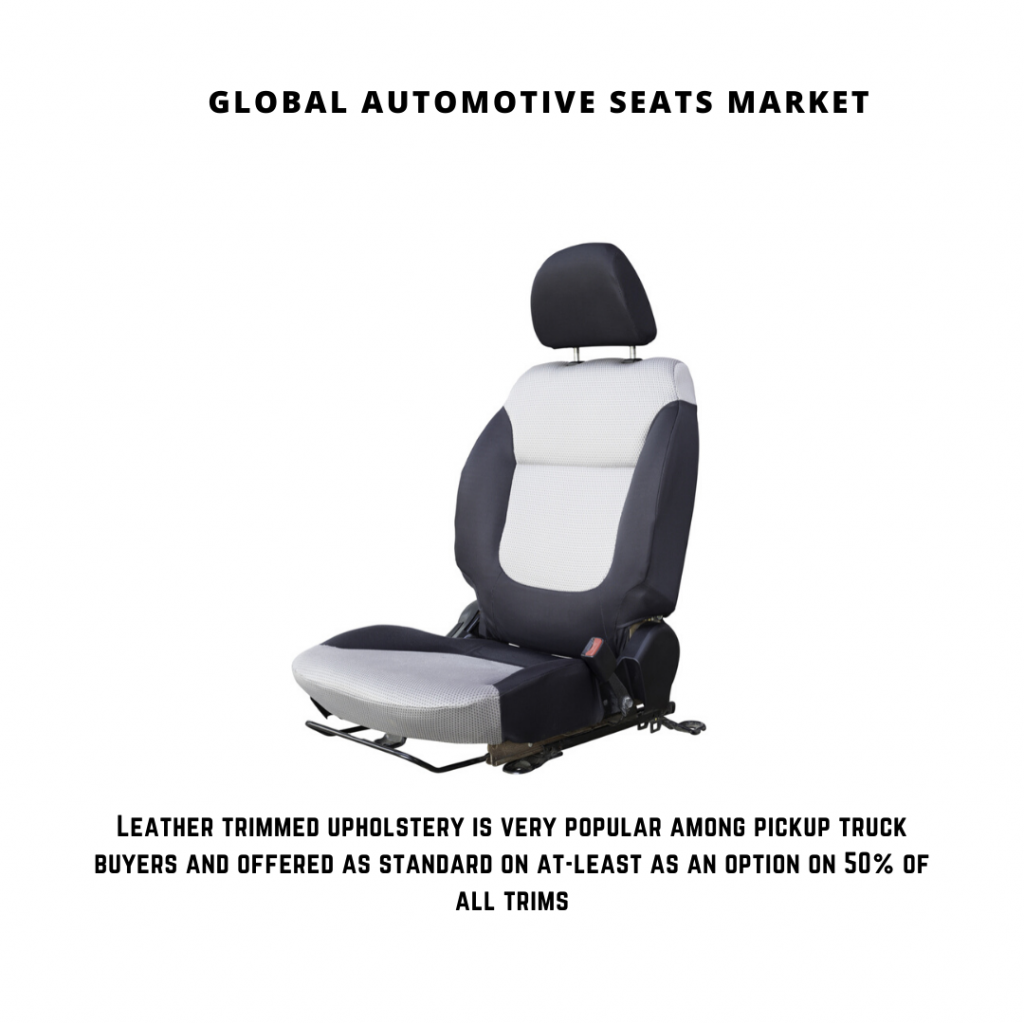 Leather trimmed upholstery is very popular among pickup truck buyers and offered as standard on at-least as an option on 50% of all trims. The installation rate of Heated seats was 53% in 2019 in pickup truck segment and it continues to gain further momentum in Jan-May 2020 as well. Dual tone upholestry is also more common on pickups than SUVs/crossovers in US.

The ventilated and heated seats penetration among top sellers was the highest compared to any other market. These features were equipped in most of the variants in SUVs and were less popular in Pick-up trucks. The climate controlled seats for the 2nd row was common in SUVs and was found in few of the variants of pick-up trucks but was not to be seen in top selling sedans.

Additional features such as driver seat memory function penetration was also the highest in US.

Customers’ preference for luxury cars has led to rapid increase in seats market in Europe. Almost all vehicles sold in EU have a standard seat side airbag, which is the reason why the average B-2-B prices per seat are higher.

Three out of top 10 best-selling vehicles in EU like Ford Fiesta, VW Polo and Renault Clio do not get a Power adjust driver seat on any trims. 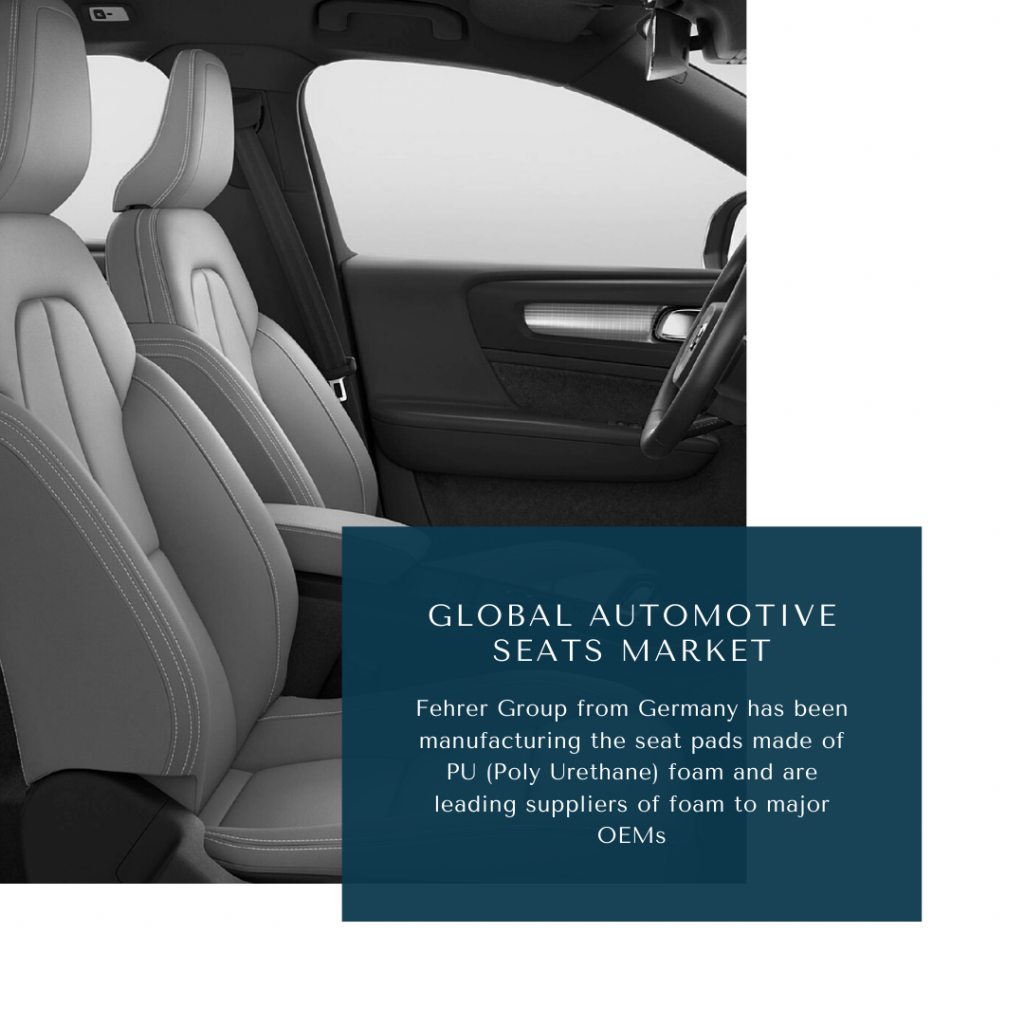 Among Premium OEMs, Mercedes has the highest fitment volume of Memory seats worldwide. The lumbar support feature is also more prominent on premium cars and less than 23% fitment in mass segment cars in 2019.

In the presence of budget models among top sellers influenced the upholstery in European cars as most of these models had only fabric covering.

In the climate-controlled seats features although it had very few models with ventilated driver seats, but ~45% of the top sellers were equipped with heated seats.

Although only 6-7 models among top 30 had massage seats option, Europe turned out to have highest percentage of driver massage seats. Almost all of the Peugeot vehicles had this feature at least as an optional feature.

Europe is home for large seat manufacturers and plants all over the Europe. All top selling higher segment cars come with heated front seats and optional heated rear seats.  Faurecia, Recaro and Grammer Group are renowned seat manufacturers in the region.

China is the single biggest country in seats production for cars. The low tariffs for raw materials have drawn many seat manufacturers to set up a plant in China. This has led to rapid growth in Chinese market.

The increase in sales of premium cars(~2 Million units per annum) has further propelled the seats market in China. Many low cost cars from domestic manufacturers have powered seats on Mid and high variants. Haval H6, the top selling SUV in China comes with front powered seats as standard.

Although most of its top 10 models had manual adjustable seat, the mid range cars especially overseas models in the top sellers was equipped with powered driver seat. As the final penetration of powered seat among top 50 sellers was close to 45%.

In terms of degrees of movement, 4 way and 6-way driver seats were mostly found in the top sellers. SUVs accounted for majority of the 6-way adjustable seats.

The driver seat memory features was mostly found in the Japanese and German make cars and except for Geely it was not found in any of the Chinese cars among top sellers.

China had the highest penetration of leather upholstery compared to any other region.

Bharat seats Ltd (owned by Maruti Suzuki) is a dominant supplier to the market leader of Passenger cars in India- Maruti Suzuki. Almost all seats supplied to Maruti Suzuki have manual adjust feature and no climate control content.

Since Maruti occupied more than 50% of the market volume of the top 30 cars, the seats market was driven by Maruti Suzuki models. The absence of powered, leather and multi way adjustable seats in most of these models meant average dollar content was one of the lowest for any major market.

The average seating content per passenger vehicle in India is less than ~$120-$150, far lesser than European, American or even Chinese average.

Powered seats are still a novelty feature in India, only D segment and above vehicles like Mahindra XUV 500, MG Hector etc get it. Among top sellers Toyota Innova, Kia’s Seltos and Sonet are the only few models with powered seat option.

4-way and 6-way adjustable driver seats occupies almost entire market in top 30 cars segment. In upholstery only 2 of the top 10 models were equipped with leather seat covers as rest of them had mostly fabric and vinyl upholstery.

Features such as driver seat memory function and massage seats were strictly limited to premium segment cars and had no place in the top sellers segment. 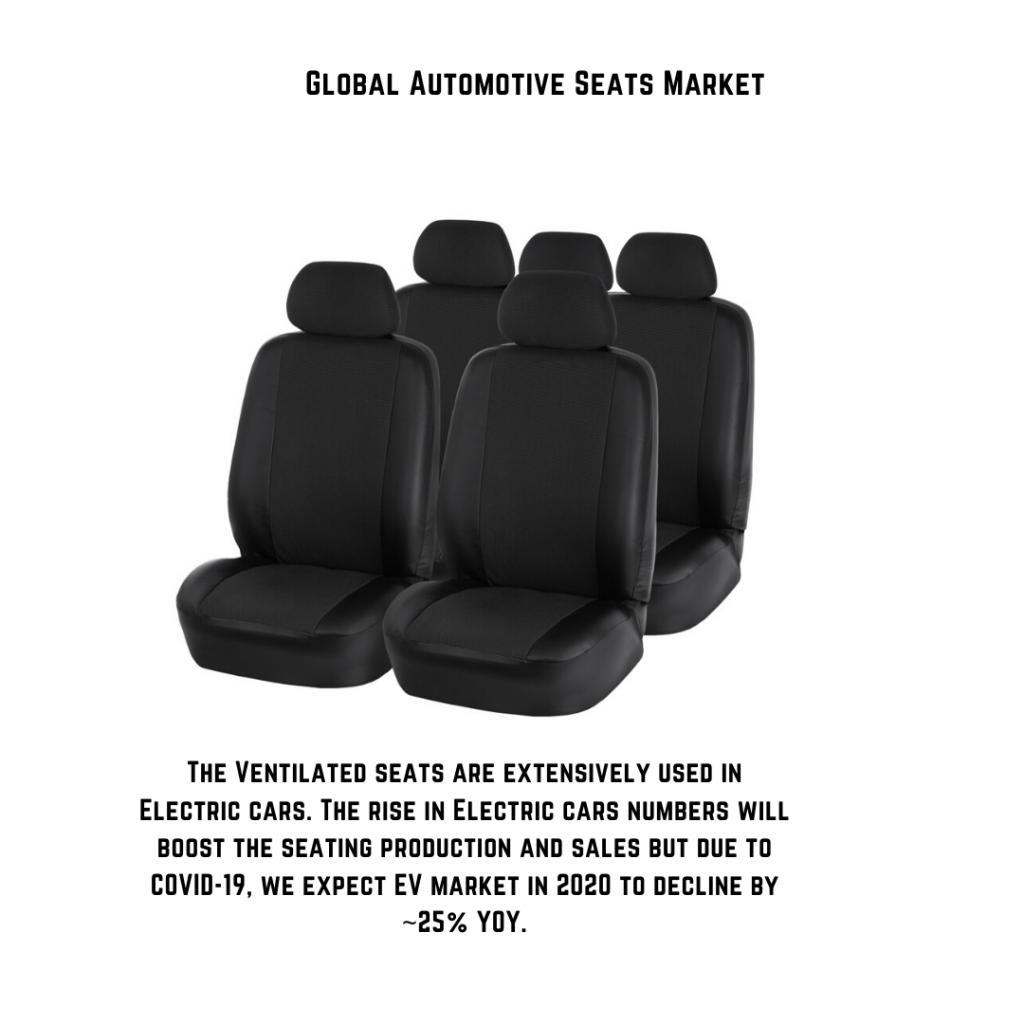 There has been a surge in sales of SUVs and MPVs around the world. Since the numbers of seats in these segments are more, the sales of SUVs are expected to increase the seating market appreciably.

The global Automotive seats market size is estimated at $XX Billion in 2020, growing at –% CAGR till 2025.

Lear, Adient and Toyota Boshoku 3 major players account for approximately 1/3rd of the market. Lear has been the leading supplier for premium car manufacturers.

US seating manufacturers like Lear, Adient, Bridgewater Interiors are the leading manufacturers in US region. Magna International from Canada has been a pioneer in manufacturing seating system completely whether its foam and trim, the structure or the seats.

US based Gentherm is the leading supplier of sub-components of Climate controlled seats, used on a variety of American and Euroepan OEMs.

Adient Yanfeng Joint venture formed in 2013, produces Seating sub-components like recliners, track, height adjusters. Another US based company Leggit & Platt is a leading manufacturer of Seat actuators used on a variety of powered seats.

In Europe, Faurecia, Recaro and Grammer from Germany are the leaders in seat making. Grammer is known for seat manufacturing for commercial vehicles and public transport. They are also manufacturing headrests for the passenger cars. Faurecia, French leading automotive part supplier has been developing seat structures for passenger cars.

There is absolutely no doubt that COVID-19 is going to hurt Revenues of all seating suppliers. There will also be supply chain issues and a hit on Bottom line to all as long as ” Premium Freight” is used to fill gaps created by long term established supply-chain.

Fehrer Group from Germany has been manufacturing the seat pads made of PU (Poly Urethane) foam and are leading suppliers of foam to major OEMs. Brose Fahrzeugteile GmbH has been developing latest seating structures and components of powered seats.

Japanese manufacturers like Toyota Boshoku and TS Tech has been players in this market from Asia region. Toyota Boshoku products are extensively used in Lexus and Toyota cars. TS Tech products range from 2 wheeler vehicles to cars supplying to leading OEMs in Japan.

In India Harita Seating and Bharat Seats are the leading seat makers. Harita seating has been involved in commercial vehicles and public transport seats.

Of late, there has been just one transaction in the Auto seating market and that is the sell-off by by US major Adient of its RECARO(Premium Seating) to Raven Acquisitions LLC completed on 1st Jan 2020. It must be noted that Adient has a strong presence in EV market in Europe and is also one of the suppliers to Tesla Model 3 seating, which is world` biggest success story in terms of EV sales.