North America has been an economic powerhouse for more than a century now.It has continued to be on top because US, Canada and Mexico are close-knit markets. This market has benefited from some disrupting innovations, the presence of skilled workers and a strong internal market. There is no other industry apart from trucking which has benefited more from NAFTA which came into effect 23 years ago. The truck manufacturers, fleet operators grew more than 4 times ever since this agreement got underway.

Seamless freight movement is what fuels mega economies. In North America, more than 66% of the trade between the participating countries i.e US, Canada and Mexico happens via Trucks. Other modes of transportation like rail, air and pipeline cumulatively combined carry only the remaining 34% of the freight. Trucks also have a major role in multi-modal shipments, mostly providing  first and last mile connectivity to factories and warehouses.

Strength in manufacturing, growing retail sales, and a slowly improving housing market are the biggest drivers of class 8 truck market. But, there are also a lot of headwinds. The fleet operators in North America have a tough job cut out on their hands. The industry is grappling with technician shortage, rising lifetime equipment ownership costs, driver shortage, upcoming GHG-2 emission and ELD mandate.

As long-haul freight continues to reduce of late, there has been a growing list of trucking companies who are opting for lower Class trucks to get their goods delivered. With digitization of supply chain, there has been a spurt in regionalisation of freight to fulfill orders in shorter times. Earlier,a truckload carrier would wait till the trailer reached its optimal capacity, now there is no time to wait. This is prompting small fleet operators, typically having 5-6 Class 8 tractors to move down a few classes and get more vehicles to augment their fleet size. This will act as a major challenge to this market. 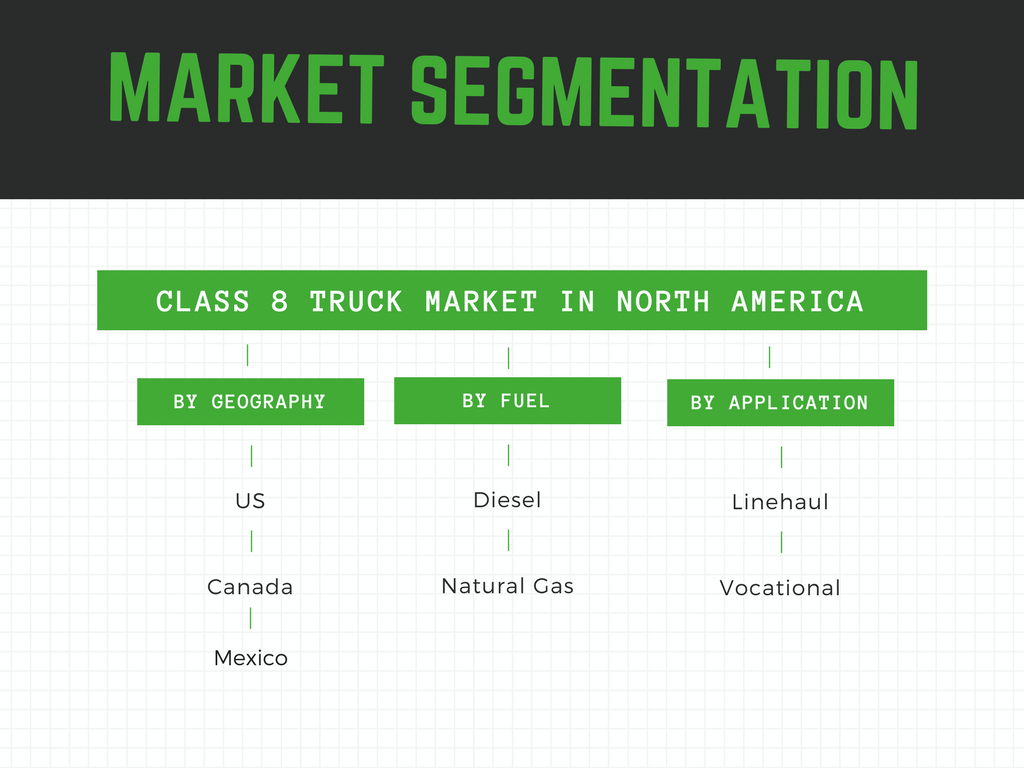 The Class 8 truck market in North America is fairly consolidated with only 5 companies making up for complete pie. Daimler is the undoubted leader in the Class 8 truck North American Market. It has held the no 1 tag for more than a decade now. Freightliner has been the unanimous choice of fleet operators across North America ,as it is cheap to buy, easy to maintain and commands a reasonable resale price even after 5 years/400K miles on the odometer. The market leader is actively pursuing autonomous technology and truck platooning in Oregon. It has also stated that the first version of the truck platooning system will have two trucks with active steering capability for the rear truck. It is also keen on launching an autonomous system before 2020.

6.8. About Suppliers to the Heavy Truck industry

7.1.1.     Growth in employment leading to higher consumer spending in US

7.2.1.     Customers moving down classes to get products tailored for their application

7.2.2.     Intermodal freight to grow at expense of Truck freight

7.3.3.     Growing vertical integration in OEMs for Engines and Axles