Small UAVs and vehicles have utilised electric propulsion for years. Manufacturers of general aviation vehicles have recently been able to investigate battery-powered alternatives due to advancements in battery store capacity. Automakers increasingly invest in electric alternatives as a result of environmental concerns. 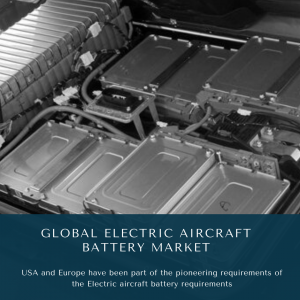 It is possible to correctly determine the remaining running time in traditional liquid fuel systems by analysing vehicle and motor performance parameters. This is due to the fact that the tank’s capacity remains constant during the course of the vehicle’s On the other hand, battery charge capacity may decrease with time, depending on the chemistry utilised.

In these systems, the electric energy is stored in batteries and may be accessed directly. Charging and discharging the batteries is a chemical process that limits the total efficiency. Energy storage capacity of batteries is another important restriction, as the energy necessary for the whole flight must be stored on board.

General aviation vehicles may be able to use batteries that have been improved recently in terms of energy density and capacity. For electric aircraft, battery health management (BHM) is a safety-critical enabler technology that may have a limited storage capacity, making it difficult to correctly estimate their entire storage capacity and determine how much of it is still usable at any one time.

Economic and environmental concerns have prompted the aerospace sector to consider economic and environmental factors. As a result, more electric aircraft have been developed (MEA). Many high energy density batteries have been developed as a result of increasing aviation power requirements, notably in the previous two decades, and advances in battery materials and technology.

It’s no surprise that Asia-Pacific has the greatest proportion of the aircraft battery requirements for its EV Mobilization aims, thanks to the expanding aviation sector in emerging nations like China Airbus manufacturing deliveries in the Asia-Pacific region made for a large portion of the total More than 3,000 aircraft are now in service with more than 100 airlines in the Asia-Pacific area, and another 2,400 aircraft are on order for future delivery. Growing military aircraft purchases, combined with a large growth in military expenditures of the countries to improve their military might, has resulted in a move towards sustainable unmanned flying demand.

USA and Europe have been part of the pioneering requirements of the Electric aircraft battery requirements. The Slovenian company Pipistrel has developed three electric aircraft. Pipistrel’s Taurus Electro model was the first two-seat electric airplane in serial production available on the market with The 21-kWh battery pack can either be replaced in minutes or recharged in less than an hour.

There has been development as part of the Solid-State based battery requirements, which are under heavy pathway footing under the EU based policy implementations. The Li-sulphur batteries are 60% lighter than Li-ion batteries, because there is less shielding required to prevent thermal runaway when the cells are assembled into packs.

The Global Electric Aircraft Battery market can be segmented into following categories for further analysis.

There have been a number of envisioned applications planned over a controlled amount of scientific technologies and advancements. The most recent development of the Lithium Sulphur based composition of batteries. The battery cells would have a capacitance of approximately 550 kWh/kg of electricity.

When the cells are combined into packs, the Li-sulphur batteries are 60 percent lighter than Li-ion batteries because less shielding is necessary to avoid thermal runaway. To protect the battery’s lithium, which is very flammable, sulphur is an excellent fire retard. It has a theoretical specific energy of 2500 Wh/kg and theoretical energy density of 2800 Wh/l, making it a strong contender for ultra-high-endurance applications. Current practical cells can be made with performance about a quarter of this.

Traditional lithium-ion cathodes are moving away from the lithium cobalt oxide (LCO) chemistry, which has been used for decades. Cobalt is an expensive, poisonous, and low-capacity element, therefore developers are eager to find alternatives to it In the past, nickel was used as a replacement for LCO since it was both less costly and less poisonous, however the lithium nickel oxide (LiNiO2) counterpart isn’t stable enough Nickel-based cathodes have been stabilised by mixing nickel with cobalt along with other metals such as aluminium and manganese, according to researchers.

Electricity is one of the most important components of contemporary aircraft, and it is In addition, they make it easier to operate in a safer, more pleasant Projects like as Clean Sky or the ICAO Global Coalition for Sustainable Aviation have resulted in rigorous rules aimed at reducing pollution and noise caused The complete electric propulsion of the aeroplane can reduce both noise and pollution.

Gill – Tedylene Batteries has been part of a major rehaul and implementation of the battery systems in the electric aircraft requirements. It has brought in the 600 Series battery which has been part of the replacement of Nickel Cathode batteries in the industry. This group of batteries has proven that high-performance, high-rate discharge lead-acid batteries can and do meet the demands of today’s high-performance jet and turbo-prop aircraft alongside the current electric aircraft requirements. In order to provide the finest possible lead-acid chemistry for our clients, Gill created the 7000 Series LT Valve-Regulated Lead-Acid (VRLA) battery line Each of the models in the 7000 Series has been engineered to give optimal power, quick recharge.

Saft Batteries has been part of a major development towards the battery technology and electric aircraft requirements. Solutions from Saft’s proven Nickel Cadmium (NiCd) and Lithium Ion aviation batteries are vital to safety, delivering high-peak-power for engine or APU start-up, as well as emergency power backups. You’ll find that they’re more powerful than lead-acid batteries while also being more reliable. They also have a lengthy and predictable service life with no chance of sudden death. It has customised the designing procedures at varied levels of requirements for aircraft design based technological implementation.