A shift to an electric bus fleet necessitates an understanding of the technology. The design of an electric bus and the necessary infrastructure depend on the application scenarios. The battery size depends on the drive cycle, terrain features and other operating conditions. The battery system preference depends on the operating conditions of the vehicle. The cost is determined by the bus and the battery size, battery type and carrying capacity.

Electric buses are also attractive because they support efforts to reduce local air pollution. Urban air quality is attracting increasing attention globally, and several international cities are moving to ban diesel vehicles from inner city roads over the next decade.

Even new, efficient diesel engines emit dangerous substances such as nitrogen oxides (NOx) and particulate matter (PM10). These pollutants are of particular concern in dense urban areas with high numbers of pedestrians and cyclists, which are typical of the conditions in which buses operate. 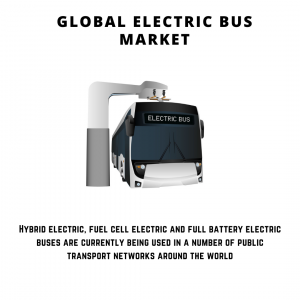 Alternative bus powertrains that reduce or remove the need for a diesel engine, while retaining the advantages of buses, are of growing interest, especially in dense urban environments. The advantages of electric buses have been recognised in the policies being implemented in several major cities around the world.

London has recently announced that no new diesel buses will be purchased for its inner-city routes from 2018. Currently, London has three fully electric bus routes, seventy-one zero emission buses in service, and has purchased (in a joint EU-funded project) twenty hydrogen fuel cell buses.

Hybrid electric, fuel cell electric and full battery electric buses are currently being used in a number of public transport networks around the world. Different types of electric bus technology vary in terms of whether electrical energy is generated or stored onboard.

Many public transport authorities have a great interest in introducing zero-emission electric buses. However, the transformation process from diesel to electric bus systems opens up a vast design space which seems prohibitive for a systematic decision-making process.

China is the world’s biggest electric bus market at present with over 61k units sold in 2020. To know more about it read our report.

In the European Union, transportation is responsible for about one quarter of all greenhouse gas emissions because over 90% of the fuel used for transportation is petroleum based. Additionally, cars, trucks and buses are responsible for other noxious or toxic substances, such as carbon monoxide from incomplete combustion, hydrocarbons from unburnt fuel, nitrogen oxides from excessive combustion temperatures, and particulate matter.

Bus technology continues to develop as other technologies improve; buses are constantly improving in energy efficiency, passenger comfort, and reducing air pollution. Some of these improvements in the Global Electric Bus market have been driven by regulatory standards for urban passenger buses. More broadly, however, there seems to be heightened community awareness of the benefits of clean, comfortable buses.

Given the important role of buses in New Zealand’s public transport networks, as well as changing technology and community expectations, this report seeks to provide an overview of current electric bus technology. In doing so, there are three main types of electric buses: the hybrid electric bus (HEB), the fuel cell electric bus (FCEB), and the battery electric bus (BEB) in current Global Electric bus market production viability.

The global electric bus market can be segmented into following categories for further analysis.

Urban buses are the first transport mode where electrification is having a significant impact today. This trend is driven primarily by the rising awareness of toxic air pollution in our cities from internal combustion engines and supported by the compelling economic, comfort, and noise advantages. There is an expectation of urban buses to be the first transport mode to reach zero emission thanks to electrification.

The recent technology which has been integrated as part of the electric Bus charging requirements within the global electric bus market includes overnight charging that involves Battery electric buses being charged statically from the grid at the depot using mechanical and electrical equipment, mainly overnight. They have large battery capacities (typically >200 kWh) enabling an extended range from 100 to 250 km and recharge at the depot with slow chargers (typically 40-120kW).

A possible technology of opportunity charging which includes battery electric buses to minimize the weight of the battery by recharging at passenger stopping points or at the bus terminal. They have medium battery capacity (typically 50 – 150 kWh) and need high-power charging usually through over-head pantographs.

This can be done either at bus stops (on-route charging, up to 600 kW) in about 30 seconds while passengers board or disembark, or at the bus terminal (usually between 150 to 500 kW) during the longer operational stop at the end station. Most of the electric buses will be charged with roof mounted or gantry-mounted pantographs making it the solution of choice for many operators.

There has been recent technological advancement made within the operational capability of the electric buses in order to increase its viability and operational efficiency through varied multidisciplinary integration of IC Engine and Electric Motor based EV Technology in order to form a hybrid operational component.

The Mild hybrid is the most recent of the hybrid technologies available within the operational EV Buses in the Global Electric Buses market. A mild hybrid is the least electrified type of HEV. A mild HEV contains an ICE with an oversized starter motor, which is also utilized as a generator.

Electric buses are growing in numbers within the Global Electric bus market, which contributes to the development of a fossil fuel free society and a reduction of emissions. Earlier studies of bus systems have identified a need to further investigate societal costs, total cost of ownership, energy use on a yearly basis to account for seasonal variations, and noise during acceleration.

Proterra has been involved in manufacturing of Electric buses of which ZX5 has been the most recent and technological high-end product employs the same technology that broke the world record for longest EV range and features faster acceleration, industry-leading gradeability, and the most battery storage on any 40-foot electric bus, offering a range of more than 300 miles per charge. It has an on-board energy capability of up to 675 kWh.

The Lion electric company operates and technologically integrates the Global electric buses market through its involvement within the Collection buses and school buses electrifications. The eLionC is the only purpose-designed and manufactured 100% electric Type-C school bus in North America.

The chassis and the van have been designed to optimize the performance of this 100% electric bus. It has a Range of 100 to 250 km per charge with an Innovative traction chain without transmission. With an electric motor capable of delivering up to 250 kW, 2,500 Nm (approximately 335 hp, 1,800 lb / ft), the  eLionChas as much power if not more than diesel engines in the school transportation industry.