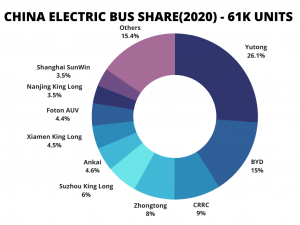 Europe meanwhile saw a substantial increase in electric vans in 2020 with 26.2% increase in 2020 compared to 2019. 28,597 electrically chargeable vans were sold in Europe in 2020. France and Germany were the main markets in this region.

Vans and buses were the main electric commercial vehicles sold, though trucks and other special purpose vehicles will soon gather increasing market share mainly in China, Europe and USA.

The company General Motors announced the development of a full-size electric van for cargo in the Chevrolet fleet as a medium/light-duty truck. The vehicles will be offered as a BEV with the company’s Ultium cells as well as Hydrotec fuel cells. However, the launch is expected to be in the year 2025. Daimler’s subsidiary FUSO has launched the new electric light-duty truck Canter in Europe and its sales.The company Daimler Trucks also launched a new line of consulting services and chargers for the electric commercial vehicle market in support of deploying more fleets for electrification. The company GMC has announced the addition of yet another electric pick-up truck after the success of its Hummer EV. Fiat has launched the electric version of its van Ducato. The company has also announced the variants with 2 battery sizes and the price of the e-Ducato to be $73,369 which is twice of the ICE vehicle.

The company Rivian has announced the use of Samsung SDI’s battery cells for its R1T electric pick-up vans/trucks and for the R1S electric SUV and also for the company’s upcoming electric commercial vehicles. The company Tevva which produces electric commercial vehicles announced partnership with Vattenfall, a major European energy company to develop a zero-emission vehicle fleet to curb the emissions through public transportation. The company Daimler and PGE (Portland General Electric) launched their new electric truck charging station in Portland, Oregon which is first-of-its-kind.

General Motors has announced development of a new commercial vehicle brand Brightdrop which consists of a hub motor and powered with electric pallets which will assist the movement of goods easily for short distances. The company Proterra launched its fifth generation ZX5 battery-electric transit bus which features a new streamlined design. The vehicle is equipped to store 660kW of energy and deliver 330 miles of range for drive. Mercedes Benz which is a subsidiary of Daimler AG has introduced an all-electric eCitaro G light duty commercial vehicle which is equipped with a new solid state battery. The company BYD developed a Blade Battery which can also be employed in light duty commercial vehicles set to mitigate the concerns regarding battery safety in EVs.

The governments across the globe are trying to promote e-mobility by giving subsidies and incentives to producers and consumers as a whole. For instance, the government of India has announced plans to lower the GST on electric vehicles from 12% to 5% in addition to the $2101 worth tax exemptions that will be given on the loan issued for the purchase of electric vehicles. The South Korean government announced plans to provide $900 million worth tax exemptions as well as subsidies for the purchase and development of electric and fuel cell based vehicles.

China is the largest developer and manufacturer of electric buses across the globe. The country’s demand is supported by the number of national sales targets, supportive subsidies, municipal air quality targets as well as favorable laws. China is witnessing the growth in the electric commercial vehicle market, more than 30 cities in China which include Zhuhai, Guangzhou, Beijing, Foshan, Zhongshan and Dongguan have announced plans to achieve 100% electrified public transport.

A Chinese autonomous driving startup company, FABU.AI has announced the funding of $15.438 million received in the series B funding round from DYEE and Cowin capital. The investment will be used in the deployment of the company’s car-road-cloud integrated solution to be used in the autonomous trucks used in port transportation and city shuttle services.

Many Chinese electric mobility companies are expanding their operations internationally by increasing bus deployment in other countries. In the year 2020, Chinese automakers sold approximately 61,000 new electric buses whereas the total production accounted for about 150,000 in China.

In June 2021, China sold 3135 units of new energy buses large and medium which was a year on year 49.09% decrease from the previous year 2020. The company Yutong has ranked first with monthly sales volume of 619 units, BYD has ranked second with 492 units sold. Yinlong has sold 251 units and King Long has sold 243 units in the month.

In December 2020, the company Yutong Bus signed an agreement with the Qatar Free Zones Authority as well as Mowasalat to develop a KD factory in Qatar. The company is also set to supply 741 units of electric buses for the FIFA world cup to be held in 2022.

To battle this, Chinese OEMs have started exporting electric buses to the rest of the world. Various OEMs have also set up joint ventures such as BYD-ADL in the UK, Yutong – Pelican etc. to improve manufacturing capabilities, share technological knowledge and increase global market share as electric buses pick up globally.

In Europe, more than 75% of the commercial electric vehicle sales will be based on LCVs, mainly vans. This is due to the market size as well as easier purchasing price for LCVs over buses and trucks.

The European Union is committed within the Paris agreement – COP21 which is directed to achieve 20% reduction in greenhouse gases in the year 2020-2021 as part of the second phase in the Kyoto Protocol. The union has announced target plans to reduce greenhouse gases by 40% by the year 2040 and complete net-zero by 2050.

The Dutch electric bus producer Ebusco and the telematics solution company ViriCiti introduced a formal partnership agreement for 7 years which will help Ebusco to power its fleet of electric buses with a live monitoring system to be put in use with ViriCiti’s fleet management system.

There are multiple subsidies in Europe to transition fleets to electric. Dutch government offers 10% of the van upto 5,000 pounds. 125 million pounds are allocated for this subsidy. In France, there is a 5,000 pound subsidy for a LCV which costs upto 45,000 pound, but it decreases to 3,000 pounds after the price increases above 45,000 pounds. 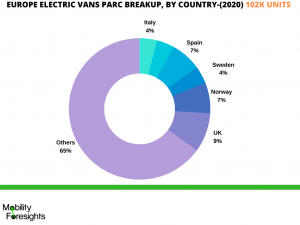 Europe also has legislation at multiple city centers to be emission free. This will ensure fleets operating in city centres to shift to electric , both PHEV and BEV. The PHEV only electric range will also have to be sufficient enough to handle a day’s journey in city centres at full electric The Asia-Pacific region is estimated to grow steadily with respect to high demand to incorporate electric buses and vans for public transportation. The key automakers and OEMs are developing more efficient and economical designs for commercial vehicles that fulfill the governmental regulations as well as the clean initiatives.

The increase in stringent emission regulations and norms in countries across the globe has incentivised OEMs to develop more technologies for e-mobility. Europe is leading the market in the adoption of commercial electric vehicles in accordance with the norms set up by the European Union.

As of March 2021, the central government of India has assigned 35.45 billion INR ($486 million) as incentives for the deployment of 7,090 electric buses, with support of subsidies amounting to 5 million INR ($69,000) per bus. Presently, 5,595 electric buses have been allocated to 64 cities and State Transport Unions, analysed to run over 3 billion kM without emissions from tailpipe.

Several logistics companies, such as PepsiCo and UPS have announced the electrification of their fleet which consists of heavy as well as light duty commercial vehicles in order to minimise the operating costs. As the fuel costs are increasing, the logistics companies cover long distances using these conventional vehicles, with the use of electric vehicles these costs can be minimised.

The market will mainly be based on buses and light commercial vehicles over trucks and other special purpose vehicles. Buses for public transport fleet and LCVs for fleet utility will be the drivers

Decreased running costs and easier maintenance will be the drivers for this market. Lifetime of a bus is ~10 years, and overall profits generated will be higher compared to an ICE bus and van.

Charging time , infrastructure and range anxiety along with initial investments are the hindrances from increased adoption of this vehicle type. Decreasing battery prices will enable it to be competitive with ICE while developing charging infrastructure, new methodologies for fast charging and increasing chargers are functioning methods to decrease the hindrances. 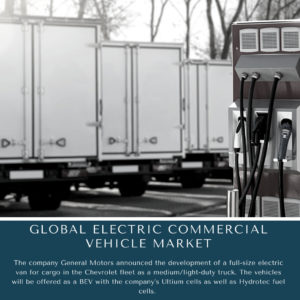 In 2020, 50% of the electric bus market was held by the top 3 players in the market. From 2021-2026, there will be increasing market share for other players, and the overall share will decrease for the top players. There will also be increased manufacturing on a global scale with increasing battery packs and various regions to adopt electric buses even in regions with low plugged in vehicle sales

The Renault group in June 2021, entered into a strategic partnership with the company Envision AESC to support the manufacture and development of low-cost advanced technology batteries by the year 2024. It has also signed an agreement with a French company Verkor to co-produce and develop locally sourced, high performance sustainable batteries for EVs by the year 2022. The company has selected STMicroelectronics to be the major innovator and developer of all advanced power electronic semiconductors for EVs and HEVs to be produced from the year 2026. The group has partnered with the global leader in resource management Veolia, to recycle the end-of-life cycle EV battery metals in a closed loop process.

The Daimler group has recorded the total sales of 736,400 units sold/registered during the second quarter of the year 2021, the increase from 541,800 units in the year 2020 was significant despite the shortage in the semiconductor industry. The company recorded a revenue of $51.5 billion for the Q2 of 2021 which was greater than the revenue of $35.7 billion in the year 2020. The company’s subsidiary Mercedes Benz recorded an increase in sales by 29% for the cars and vans division.

Hino Motors Co. which is a subsidiary of Toyota motor has signed a strategic agreement with REE Automotive to develop next-generation mobility solutions for commercial vehicles. They will develop a mobility service module for the delivery of goods and services in the future. The company in June 2021, also announced the launch of their new HINO Poncho Z light duty EV bus to be introduced in the Japanese market by the year 2022.

Rivian has also confirmed the development of a second factory for the production of commercial electric vehicles in the heavy to light duty range. The project is called ‘Project Tera’ which has secured a funding of $2.5 billion in the round which included Ford as well as Amazon. The PSA Group which consists of companies like Peugeot, Citroen, DS and Opel Vauxhall have recorded an increase of approximately 23% in the number of units sold for electric vans as well as light duty commercial vehicles.

BYD UK and ADL have announced an electric vehicle partnership with the National Transport Authority of Ireland for the delivery of up to 200 BYD ADL Enviro200 EV zero emission battery electric buses. They have signed an initial order of 45 buses with deliveries commencing from 2022. The company has sold 1250 units of commercial vehicles in the month of June 2021, the new energy vehicle sales has reached to 40,116 units which has increased by 207.1% year on year. The company BYD also released the first quarter report for the year 2021, with the operating income of $6.3 billion which was a significant 108.31% increase from the Q1 of year 2020 at 3.02 billion.