The suspension system of a vehicle refers to the group of mechanical components that connect the wheels to the frame or body. A great deal of engineering effort has gone into the design of suspension systems because of an unending effort to improve vehicle ride and handling along with passenger safety and comfort. In the horse and buggy days, the suspension system consisted merely of a beam (axle) that extended across the width of the vehicle.

The one-piece axle design was utilised in early vehicles, but instead of being rotated at the centre, it was fixed to the vehicle through springs to offer shock load absorption from road imperfections. In later installations, leaf springs were replaced by coil springs. In front‐engine rear‐drive vehicles, the front beam axle was replaced by independently mounted steerable wheels 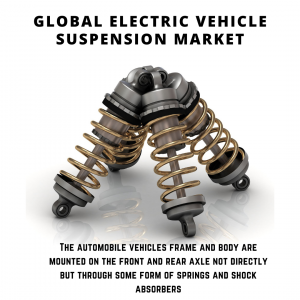 An EV suspension operates on the force dissipation concept, which includes turning force into heat and therefore reducing the impact that force would have had. This is accomplished by the use of springs, dampers, and struts. The energy will be stored in a spring, and it will be converted into heat via a damper.

Automotive suspension systems are dynamic systems that have a direct impact on the safety and comfort of the vehicle user as well as other road users. The technical state of this system influences the vehicle’s behaviour under various driving circumstances and is especially important for characteristics such as braking distance, grip, acceleration, or following a curved track.

To satisfy ever-increasing demands, modern vehicle suspension systems have evolved into extremely sophisticated mechatronic components that allow the settings of vibro insulation systems to be adjusted. Actuating components allow for the adjustment of characteristics such as stiffness within a defined range of values.

However, in order for EVs to reach an acceptable range, numerous energy-saving measures must be used. While regenerative braking is widely established, the relatively new regenerative active suspension technologies offer the potential to enhance energy efficiency and range. While this was achieved by pairing an electricity generator to a conventional suspension system with steel springs and hydraulic shock absorbers, Intertronic Gresser GmbH in Wýrzburg, Germany have recently applied to patent a unique “electricity-generating suspension system for hybrid and electric cars”

In the present environment, Asia-Pacific (APAC) is acquiring significant development opportunities in the automobile suspension industry. This development would be followed by Europe with an increase in the demand of commercial vehicles and improved automobile and cab services for locals, owing to the increasing population and developing economies of this area.

The Global Electric Vehicle Suspension Market can be segmented into following categories for further analysis.

The rapid deployment of electric and hybrid cars has added a whole new dimension: To overcome EV customers’ range anxiety, engineers are turning to regeneration of energy. Initially, research concentrated on harvesting the thermal energy created during braking to increase the range between charges, but with regenerative suspension systems capable of recovering up to 400watts on ordinary roads, numerous firms have made major investments in this new technology.

When installed in hybrid cars, such a technology may result in a one to five percent increase in fuel economy. Furthermore, several firms are embracing the opportunity to integrate regeneration technology with active suspension adjustment to improve ride and handling even further. One of the very first suspension systems targeted only at EVs, Michelin’s Active Wheel technology.

Although not regenerative technology, the Activ Wheel included a pair of electric motors: a hub traction motor for driving and another to operate the active suspension system. The gearbox, clutch, transmission shaft, universal joint, and anti-roll bar were all eliminated in the system, which was developed particularly for battery or fuel-cell powered electric cars.

In another novel development, Israeli start-up SoftWheel, which already has the wheelchair and bicycle world talking about its ground-breaking suspension system, is now contemplating the electric vehicle market. The wheel which incorporates a selective suspension mechanism only acts when an impact above a pre-set threshold is encountered. This threshold is determined according to user requirements and is easily adjustable.