The phrase “electric mobility” (e-Mobility) refers to the development of electric cars. Electric cars can be both the initial purchase and an option for the partial or entire replacement of fleets that operate on fossil fuels and produce so-called greenhouse gases, in response to a desire for more sustainable alternatives (GHG).

Electric scooters are sold under the MCN 8711.60.00 classification (“motorcycles, including mopeds and cycles with an auxiliary engine, with or without side cars – with electric motor for propulsion”), which was established in 2017 and has been in effect since January 1, 2018.

Despite the absence of traditional manufacturers of mopeds, the segment of electric scooters advances around the world, with greater or lesser speed, developed mainly by small and medium-sized companies, unknown to the public. 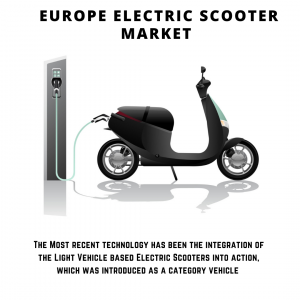 At present, China has 50 million battery-operated bicycles on the road, of which a very small percentage operate on Li-ion batteries. The rest of them use lead acid batteries. In China, about 2,500 companies produce electric two- or three wheeled vehicles.

All of the large companies producing electric vehicles (EVs) have E-bike models that are powered by Li-ion batteries, but the performance-to-price ratio for those E-bikes is still not compatible with that for E-bikes powered by lead acid batteries.

Modern mobility has evolved dramatically since the invention of the internal combustion engine (ICE). Today, contemporary transportation would be hard to envisage without motorised vehicles. Powered Two-Wheelers (PTWs) are an important subset of these vehicles. Electric low-powered PTWs, often known as e-scooters, have been popular in recent years.

The Motorcycle Industry in Europe is committed to applying the principles of sustainability as a key part of the effort to develop its market and value. Manufacturers wish to contribute to the development of a vision for the future of transportation, and to meet the expectations placed on the Powered Two-Wheeler sector.

The evolution of this sort of vehicle has generated versions that are useful in urban areas during the previous two decades, with Chinese manufacturers leading the way. However, high-powered two-wheelers (motorcycles) dominate the European market. This may change when e-scooters become more widely available.

Many changes in mobility behaviour are being caused by the expansion of the PMV industry. In Europe, the use of e-PMVs has risen dramatically in recent years (beginning in 2015). The number of scooters on road in Europe has grown by various multiples in past 4 years

Urban transportation, commuting, and our way of life have all been transformed by technological developments. However, European civilization has reached a point where people’s infatuation with technical advancements has led to indiscriminate use of these technologies. Shared e-scooters, for example, show that introducing technology has certain benefits for consumers, but it also has some drawbacks.

The Europe Electric Scooter Market can be segmented into following categories for further analysis.

Nowadays in Europe, there is a noticeable increase in the popularity of power two-wheelers (PTW). This is largely due to the increase in urban transport problems. In analyzing the development of PTWs, it is important to note the fundamental differences in their use on the European continent.

The simplicity of the e-scooter, both as a toy and as a possible mode of transportation, is part of its attraction. Another aspect of its usefulness, particularly for mature professionals, is its limits. Due to the tiny size of scooters, the onboard battery is generally smaller than a cable box, limiting the rideable total capability.

The Most recent technology has been the integration of the Light Vehicle based Electric Scooters into action, which was introduced as a category vehicle must not exceed 60kg of weight, 30km/h of top speed and 1kW of motor output. Most of them are light, easy to handle and cheap compared to an engine scooter. Since the entrance barrier is low, various models made by various industries appeared on the market all of a sudden.

Hybridization of Fuel Cell and Battery Operations has been the other category of mobilization, wherein the polymer electrolyte membrane fuel cells. It is figuring to be a provider of fuel cell stacks and systems, to enter commercialization of fuel cells with scooter engines and mobile power generators, to develop safe and convenient metal hydride hydrogen storage and distribution systems. This is being aimed to act as a 36 Volt High Power Lithium Battery Pack based technology within the E Scooters in various parts of Europe being tracked and developed by Private investors.

There has been constant technology adoption and automated control system implementation within the two-wheeler market of Europe. The major stakeholders are involved in implementing new strategies of technology to have a better and safer ride for the customers.

Horwin Intelligent EV Scooters have been one of the most demanding and virtually impressive E Scooters in the market of Europe. HORWIN Europe GmbH is an import-oriented company in the heart of Europe – in Kummersdorf near Vienna. Horwin has recently launched its L3e Category Vehicle CR6 and CR6 Pro in which charging is only needed after 120 kilometres of driving and even the performance does not come short at all. With an acceleration in only 6 sec from 0–60 km/h and a top speed of up to 105 km/h (CR6 PRO).

Up to 28.000 Candela of light are projected by 6 LED modules through glass lenses onto the road ahead of you to ensure maximum sight under dark conditions has been integrated within the vehicle. The HORWIN CR6 uses the most modern lithium-ion batteries available. The 55 Ah battery pack is charged in approx. 3 hours from 0–80%.

The Electric Motorbike Company Limited, UK ( THELMOCO ) has introduced the Ultra Model Variant which is a 125cc equivalent scooter with a powerful 4000W motor which will cover between 40 and 55 miles on a single charge. The 125cc Ultra can also be equipped with a rear rack and top box. An impressive 8-amp charger will have the battery topped up from an ordinary domestic socket in about 3.5 hours and fully charged within 5 hours.