Ethanol with the molecular formula C2H6O is a clear, colourless, volatile liquid with a pleasant smell made by fermentation of sugar. Ethanol is one of many kinds of alcohol and is the only type of alcohol that can be consumed.

Apart from consumption, ethanol is used for several other purposes such as fuel to power engines, as a disinfectant (because of its bactericidal activity), as a solvent and preservative as well as serving as the primary ingredient in the preparation of alcoholic beverages. 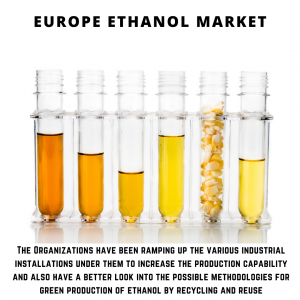 EtOH is a naturally widespread chemical, produced by ripe fruits and by wild yeasts or bacteria through fermentation. Ethanol from biomass can be produced from any feedstock containing appreciable amounts of sugar or materials that can be converted into sugar.

Ethanol has played a major role in the market of EU Nations, since they are focused upon collective climate change and efficiency in terms of automotive usage categorization. This has made them focus on a considerable percentage of proportional replacement in the fuel requirements by ethanol. Apart from fuel requirements, it also has focused upon other manufacturing additions and advantages.

As an alternative to using sugar- and/or starch-based biomass, R&D is focused on advanced processes that use lignocellulosic materials as feedstocks. These processes have the potential to increase the variety and quantity of suitable feedstocks, including cellulosic and food processing wastes, corn stoves and cereal straws, as well as dedicated fast-growing plants such as poplar trees and switchgrasses.

Ethanol is a widely produced fuel, as well as a fuel additive. Its price is closely related to the price of gasoline, its major substitute alongside which Biofuels and electric mobility are complementary options in decarbonizing transport. This has been a possible step towards significant untapped potential in ethanol within EU Nations.

It should be noted that the demand of conventional fuel, in general, is expected to decrease more than the demand of biofuel, especially in Brazil and the EU. This can be inferred by the use of high-ethanol blends, which have not yet been introduced in other parts of the world except for the European Union Nations.

The scientific and technological advances in microbiology of fermentation have greatly contributed to the evolution of the ethanol industry in Brazil and other European Nations. These contributions have increased view and comprehension about fermentations in second-generation ethanol. Nowadays, new technologies are available to produce ethanol from sugarcane, corn, and other feedstocks, reducing the off-season period.

Currently, the main industrial route used for ethanol production in the EU is the microbiological process, also referred to as alcoholic or ethanolic fermentation. Keeping this in mind, The flex-fuel car technology has allowed the EU Nations consumers to choose for the most convenient and cheaper fuel.

Currently, the use of ethanol as biofuel in Brazil has been the most successful program to replace fossil fuels worldwide. Several countries within the EU have started their own programs for production and use of ethanol as fuel to reduce oil dependence and GHG (greenhouse gases) emissions with the support of EU Policies and regulations.

The Europe Ethanol market can be segmented into following categories for further analysis.

By Generation of Ethanol

The EU is in the middle of a massive re-thinking of its energy and climate policies, including transport decarbonization. They have focused themselves to achieve the success, by resisting the temptation to follow overly dramatic, technology solutions such as imposing an immediate switch from internal combustion to electric vehicle power trains, driven by a restrictive approach that considers only tailpipe emissions and misleadingly labels electromobility as emissions-free.

EU Nations have been involved in extensive procedures and research activities through pilot projects, wherein the advancements are being analysed for future demands by inclusion of various forms of ethanol production into focus.

One of the more sophisticated solutions called the lignocellulosic feedstock biorefinery (LCF biorefinery) is being run which uses lignocellulosic biomass, for example wood from short rotation forestry or energy crops like Triticale. Besides EtOH, in theory, a broad range of intermediate chemicals could be produced from a LCF biorefinery. Today in Europe some pilot or demonstration plants are running or are being commissioned.

The EU Nations have been focusing upon having various methodologies and technological integrations done to produce Bio ethanol products from residues and wastes in the environment as part of pollution control strategy. Bioethanol can be derived from a large variety of residue and waste streams – either by capturing sugar or starch rich waste streams or by using waste fractions of crops (so-called ligno-cellulosic biomass).

The Ethanol manufacturers in EU nations face a localized competition on availability and various technological resources which can be mobilised to produce the required volumes of ethanol as part of edible and non-edible usage requirements. The Organizations have been ramping up the various industrial installations under them to increase the production capability and also have a better look into the possible methodologies for green production of ethanol by recycling and reuse.

The ClonBio Group of EU has been involved in large scale and high efficiency production of ethanol at its installations. It has been extensively moving into the integration of Ethanol into various products such as Meat Alternatives production, Fuel, and Industrial Beverages, Biochemicals and Fish Food or Amino Acids.

It has been recently using the biorefining process which starts with local feed corn, which is milled to flour. Water is added to the flour to make a mash and enzymes are added to this to convert the maize starch into simple sugars that are digestible by the yeast. These sugars are converted through a complex fermentation and distillation process to produce 99% pure ethanol.

Pannonia Bio is also a formidable player in the production of Ethanol within the EU, wherein the usage of hard elemental fibres present in corn is used to produce various renewable biochemicals. The hard fibre element of the corn is being used to develop renewable biochemical products in combination with other elements of the corn. These include oligosaccharide prebiotics (supporting colon bacteria growth); cellulose (plant fibre) and xylitol (a sugar alcohol).