Ethanol is one of the principal biofuels, which is naturally produced by the fermentation of sugars by yeasts or via petrochemical processes such as ethylene hydration. It has medical applications as an antiseptic and disinfectant. It is used as a chemical solvent and in the synthesis of organic compounds, apart from being an alternative fuel source.

Ethanol blending offers significant advantages such as increase in Research Octane Number (RON) of the blend, fuel embedded oxygen and higher flame speed. These properties of ethanol help in complete combustion and reduce vehicular emissions such as hydrocarbon, carbon monoxide and particulate matter. The calorific value of ethanol is around 2/3rd of gasoline. 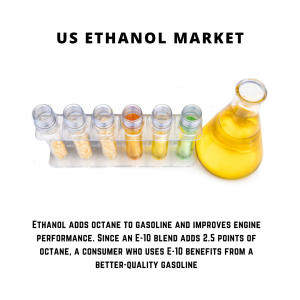 However, ethanol has a higher octane number and thus the engine can be operated with a high compression ratio without knocking. This increases the efficiency of the engine considerably. This combined with optimal spark timing negates the fuel economy debit due to low calorific value of ethanol.

Ethanol is produced from various kinds of substrates. The substrate used for ethanol production is chosen based on the regional availability and economical efficiency. Dry milling the dominant and more efficient ethanol production process than wet milling. It produces about 2.8 gallons of ethanol per bushel of corn.

Ethanol is made both by dry and wet milling of corn. Dry mill plants are designed to process corn into ethanol with Distiller’s dried grains and carbon dioxide as the primary co-products. In dry milling, the entire kernel or corn or other starchy grain (wheat, barley, sorghum) is processed without separating out the various component parts of the grain such as the germ.

The United States is currently using conventional distillation that produces 190 proof ethanol which is then dehydrated to approximately 200 proof (pure alcohol) through the use of a molecular sieve. This ethanol, termed anhydrous because of the absence of water, is then blended with about five percent of a denaturant such as unleaded gasoline so that it cannot be consumed as a beverage.

Currently a considerable percent of all ethanol produced in the U.S. uses corn as the primary feedstock. Sucrose from sugar cane is used as an ethanol feedstock in Brazil and Australia while sucrose from beets is used to produce ethanol in Europe. The technology for converting sucrose to ethanol is well established, but not widely used in the U.S.

Typically ethanol is blended with gasoline to produce an oxygenated motor fuel within the United States of America. Ethanol is used to improve octane in conventional gasoline, to add oxygen to meet Clean Air Act requirements, and as an extender for gasoline. While ethanol adds octane to gasoline it has a lower energy content.

The US Ethanol market can be segmented into following categories for further analysis.

US Ethanol Market By Generation of Ethanol

US Ethanol Market By Usage

US Ethanol Market By Regional Classification

The availability of conventional biofuels i.e.1G ethanol and palm Stearin/ non-edible oil seeds-based biodiesel is limited. With the recent initiatives such as widening of feedstock base for ethanol production, scheme of augmenting capacity and exploring Used Cooking Oil (UCO) for Biodiesel production.

Today ethanol is produced from a variety of sugar and starch-bearing feedstocks for use as an industrial chemical, beverages, alcohol, and fuel ethanol. Fuel ethanol technology has been developed through extensive research and development in more than a decade.

Conventional processes have been improved while advances continue to be made in lignocellulosic biomass conversion. Advanced technologies in Fermentation, Distillation, and wastewater treatment have been developed through consistent efforts and understanding of process details as well as effective plant design. 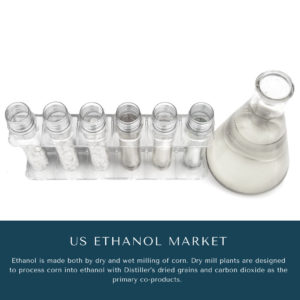 The Research and Development at extensive stages has produced the latest technology of including and placing feedstocks of various alternate categories within the production requirements. The LCB Methodology of production has been of major importance in these aspects. This methodology uses the Agri and Forest Waste Abundantly available in nature to produce the required production volumes of ethanol.

Conversion of corn kernel fiber fraction to ethanol and identification and development of new and higher value coproducts. Many processes are employed like quick fiber , quick germ, COPE process , enzymatic milling, dry grind, and wet milling. Both dry grind and wet milling processes are popular now-a-days but most of the ethanol is produced by dry grind method only because it is less capital and energy intensive.

Ethanol adds octane to gasoline and improves engine performance. Since an E-10 blend adds 2.5 points of octane, a consumer who uses E-10 benefits from a better-quality gasoline. This characteristic also works to the advantage of gasoline refiners who can refine a sub-octane base to which ethanol is blended to provide an 87-octane regular gasoline. This intervention has proven to be extensively useful for the USA in terms of increasing the consciousness towards the Air Quality parameters and adherence to the Kyoto Protocol as a Section I nation.

Considering the growth factors of India’s ethanol generation capability and other emerging companies as part of technological improvements in ethanol production through various raw materials has been placing a major competition on the localised scale.

The Ethanol production giant, ADM Corporation had recently been part of the policy integration to pump nearly greater than 10% of production capacity of Biofuels around the Country. This has been achieved through its latest indigenised efforts to increase production capacity and volumetric requirements being met. They have been extensively integrating the dry mill technology to enhance the levels of production through maize and corn inputs.

Cargill produces and commercializes ethanol for industrial applications for use in products including solvents, extractants, antifreeze and intermediates in the synthesis of various organic chemicals. This includes both 96% and 99% ethanol , either with or without the use of denaturants.

This alcohol is used widely in the coatings, printing inks and adhesives industries. As part of increasing the efficiency and reduction in energy consumption structures, the company has achieved a 23 Percent concentration increase through enzymes which would bring down the emission per unit of production.

MAJOR PLAYERS IN US ETHANOL MARKET

THIS US ETHANOL MARKETREPORT WILL ANSWER FOLLOWING QUESTIONS