A PV (photovoltaic) panel is another name for a solar panel. Photovoltaic cells convert solar energy into direct current electricity. PV converts sunshine energy, which is made up of energy particles called as “photons,” into electricity that may be utilised to power electrical components. PV panels are the combination of PV modules. A solar panel system is a collection of linked photovoltaic (PV) solar cells (also known as an array). Each solar panel (module) in the array is made up of a set of solar cells packed together in a metal frame. 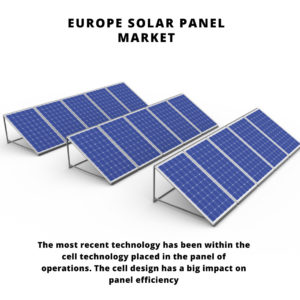 Because of rising energy demands, solar energy is critical for all countries. The rapid decline of fossil fuels provides us with this additional energy source. Furthermore, air and water pollution, as well as global warming, occur as a result of the usage of fossil fuels, which are known as significant energy sources. As a result, governments began to prioritise renewable energy sources such as solar energy. The Sun contains more energy than humanity will need for billions of years, and we can convert that energy to power using solar panels. As global warming caused by non-renewable energy sources worsens, there is little question that solar energy will become a more essential energy source in the future.

Solar cells are tiny silicon discs that convert sunlight to energy; silicon is referred to as a semiconductor. Silicon is commonly used in the production of solar cells. By doping silicon, we can modify its behaviour and make it a conductor. A little quantity of impurity added to silicon crystal makes it conductive. The objective of the Stringer machine is to combine the cells that make up the string. The strings are typically made up of 10 or 12 solar cell components. It is changeable from the stringer machine’s screen. The stringer machine’s parameters are input manually on the screen; cell size, cell spacing, string cells, such as soldering power and soldering duration.

Despite the fact that the Coronavirus has had a detrimental influence on everyone’s life in many ways, solar PV electricity in the European Union has demonstrated great resilience in 2020. Surprisingly, demand for solar power technologies grew significantly in the European Union in 2020, rather than decreasing. In 2020, EU member states installed 18.2 GW of solar power capacity, an increase over the 16.2 GW added the previous year.

Beyond its unique versatility and constantly improving cost leadership, there are many good reasons for Solar’s recent positive developments and optimistic outlook in the European Union – and that is policy support in Brussels and many other EU capitals, creating the right market framework conditions for any type of the numerous possible solar applications. The EUR 672.5 billion Recovery and Resilience Facility is at the heart of the so-called Next Generation EU strategy (RRF). The RRF will offer Member States with financial assistance that can be immediately injected into their economies in the form of grants, loans, or state guarantees. Investments covered by the RRF must be in line with the objectives.

Germany is once again the leading solar market in Europe, a position it has maintained for the majority of the previous 20 years, with just six interruptions, once by Italy, twice by Spain, and three times by the United Kingdom. Following a consolidation phase following the first full feed-in tariff-based European solar boom, the continent’s largest economy’s solar sector has been experiencing growth. This is due to a combination of self-consumption and attractive feed-in premiums for medium- to large-scale commercial systems ranging from 40 kW to 750 kW.

Solar power is one of the most dependable and pure energy sources available, and it has shown to be a viable alternative to fossil fuels, which are now damaging the environment and contributing to global warming. Solar energy is produced using a variety of technologies, including solar PV, solar thermal, concentrated solar thermal (electricity), and concentrated PV. The most important reasons driving the overall expansion of the solar power industry are volatile fossil fuel costs, the desire to disassociate reliance on fossil fuel imports from areas of political uncertainty, and environmental concerns.

The most recent technology has been within the cell technology placed in the panel of operations. The cell design has a big impact on panel efficiency. The silicon type, multiple busbars (MBB), and passivation type are important aspects (PERC). Due to the high purity N-type silicon cell base and minimal losses from busbar/finger shading, the high-cost IBC cells are now the most efficient (20-22%). Recent mono PERC cells with MBB and heterojunction (HJT) cells, on the other hand, have attained efficiency values considerably above 20%.

PERC has been another considerable technology brought in the market, which has the integration of two layers applied to the back of the crystalline silicon cell. They enhance the movement of electrons in the cell. They also bounce back light that has passed through the cell the first time onto the surface so that it can be converted to usable electricity. PERC affords a 1% increase in efficiency which is admittedly modest at best. Also, PERC solar cells are susceptible to a specific type of degradation called “light and elevated temperature-induced degradation,” (LeTID), which reduces efficiency over time.

The vast majority of solar modules on the market and utilised in home and commercial solar systems are silicon crystalline. These modules are made up of numerous strings of solar cells that are connected in series (positive to negative) and set in an aluminium frame. Each solar cell has the capacity to produce 0.5 volts. A 36-cell module is capable of producing 18 volts. The major stakeholders are involved in implementing new strategies of technology to have better and safer ride for the customers.

Photowatt is a French solar panel manufacturer. They design and manufacture PV modules utilising crystalline silicon technology, which may be utilised for a wide range of applications ranging from household equipment to ground-based power plants. They released Crystal Advanced modules and cells. The Crystal Advanced® PW72HT-C High Efficiency module takes use of the most recent advancements in Crystal Advanced® PERC technology for optimal surface performance. It has been designed in such a way that the Aluminium frame is there for resistance to harsh weather conditions (5400Pa) as well as an induced Frame resistance to gel damage.

Solarwatt is another major technology developer in the Europe Region, with an aim of increasing efficiency of operations within the solar panel. Solarwatt is the top German manufacturer of photovoltaic systems and one of the world’s major power storage suppliers. Solarwatt adopted glass-glass technology as a new standard for its modules in 1998. This is due to the fact that this technology is distinguished by exceptional lifespan, extraordinary resilience, and the largest yields. They also offer a sophisticated energy management system that maximises the usage of rooftop solar electricity.