Electric vertical take-off and landing aircrafts (eVTOLs) are being built and tested, and their configurations vary from hover bikes to electric ducted fans. The VTOL aircraft, which can fly as quickly as an aeroplane and take off and land vertically like a helicopter, was developed after a lot of study. Many other variants were tried, but only the Harrier was put into service.

At that time, choosing between using the same power plant for hover and cruise, or having two different power plants was the main design decision. Different configurations were tested by different companies during the span of two decades. VTOLs that employ the same propulsion system for hover and forward flight can rotate the thrust direction in various ways. The tail-sitters turn the entire aeroplane around. They are conceptually simple, but control is complex and dangerous. 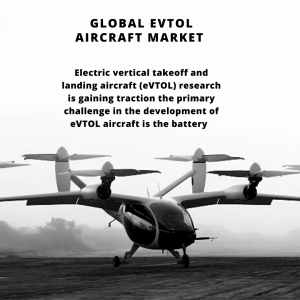 The blowing action of the propellers augments the lift produced by the wing at high angles of attack. Tilt-wings of the 1950s and 1960s had control issues due to limited pitch control power, were mechanically complicated, and the loss of an engine may result in catastrophic roll upset.

Most eVTOL companies have been quite secretive about their operations, making it difficult for novices to the field to discern between aircraft with viable pathways to market and those that are unlikely to ever see the light of day.

To know more about Flying Car and Flying Taxi Market in US and Europe, read our report

The eVTOL aircraft market has enormous potential, but, like other emerging technological industries, it will produce both winners and losers. The report’s assumption is that more informed investors will be better positioned to identify winners and so contribute more to the advancement of the industry as a whole.

Electric vertical take-off and landing aircraft can take off and land vertically, similar to a helicopter, without requiring a runway. Unlike traditional helicopters, which use internal combustion engines and mechanical transmissions to power their huge main rotors, eVTOL aircraft usually use numerous smaller propulsion units powered by electric motors.

More funding is flowing into new technologies than ever before, including the booming passenger air mobility market. VC activity is at an all-time high, from eVTOL to air taxis, and the effects of this momentum will most certainly be seen in cities throughout the world in the next few years.

eVTOLs are much less loud than helicopters—eVTOL aircraft developers are aiming for a 20-decibel noise reduction. Cities and metropolitan areas are already hotspots for noise pollution, and Hussain believes that quieter operations will be critical for increasing the frequency of eVTOL flights and expanding routes closer to residential areas. The passenger air mobility industry includes eVTOL aircraft manufacturers, their enablement technologies and air taxi service providers, and it has the potential to significantly disrupt the urban mobility landscape.

The Global Evtol Aircraft market can be segmented into following categories for further analysis.

Envisioned applications for passenger transportation include usage as air taxis, for emergency response (first-aid, police, rescue), and for leisure activities. As for the transportation of goods, eVTOL would offer larger capacity for freight transport than ordinary drones.

There are two types of take-off and landing areas: one that just accommodates departures and arrivals and another that also includes charging infrastructure. Borrowing technology from other sectors (electric vehicles) is expected to help cut prices for charging equipment. Tip-jets are a type of compound autogyros that employ a rotor driven by jets at the blade’s tip, propellers for horizontal propulsion, and a wing for lift. High-pressure engine efflux is ejected into a tube called the augmenter by ejector VTOLs, forcing extra ambient air to accelerate through the channel and mix with the engine exhaust.

The primary challenge in the development of eVTOL aircraft is the battery. At most, the energy density of the most commonly used lithium-ion batteries is 240 Wh/kg. Even with this present level of battery performance, an eVTOL with a cruising range of many tens of kilometres, such as the Volocopter, could be powered. Among factors that could impede growth, in addition to the difficulties for ensuring safety, there are uncertainties in the external business environment, such as public acceptance and regulations.

Volocopter has been one of the leading manufacturer of the eVTOL Aircrafts in the industrial market developments. The company’s “Volocopter 2X” variant seats two people (one pilot and one passenger), and its form is comparable to that of a tiny general-purpose drone known as a multicopter.

Because it is composed of carbon fibre composite material, the aircraft has a width of roughly 9 m and weighs approximately 290 kg. It flies thanks to 18 tiny rotors powered by lithium-ion batteries. Key aviation electronics, such as equipment for aircraft position control, are supplied by the US company Honeywell. After a successful manned flight in 2016, test flights were conducted in Dubai, UAE, in 2017.

Airbus is working on a one-seater dubbed “Vahana” and a four-seater called “City Airbus.” Vahana successfully completed the first flight of a prototype in 2018, and in February 2019, the news of a successful vertical take-off and landing and level flight achieved during a test flight lasting roughly 7 minutes was made public. As for the City Airbus, it has been reported that the first successful flight was realized in May 2019. The company aims to commercialize Vahana and City Airbus by 2020 and 2023, respectively.