FLYING CAR AND FLYING TAXI MARKET IN US AND EUROPE

The worldwide loss of productive man-hours due to increased road congestion has become a major cause of concern for employees, enterprises, government bodies and environment protection bodies alike. 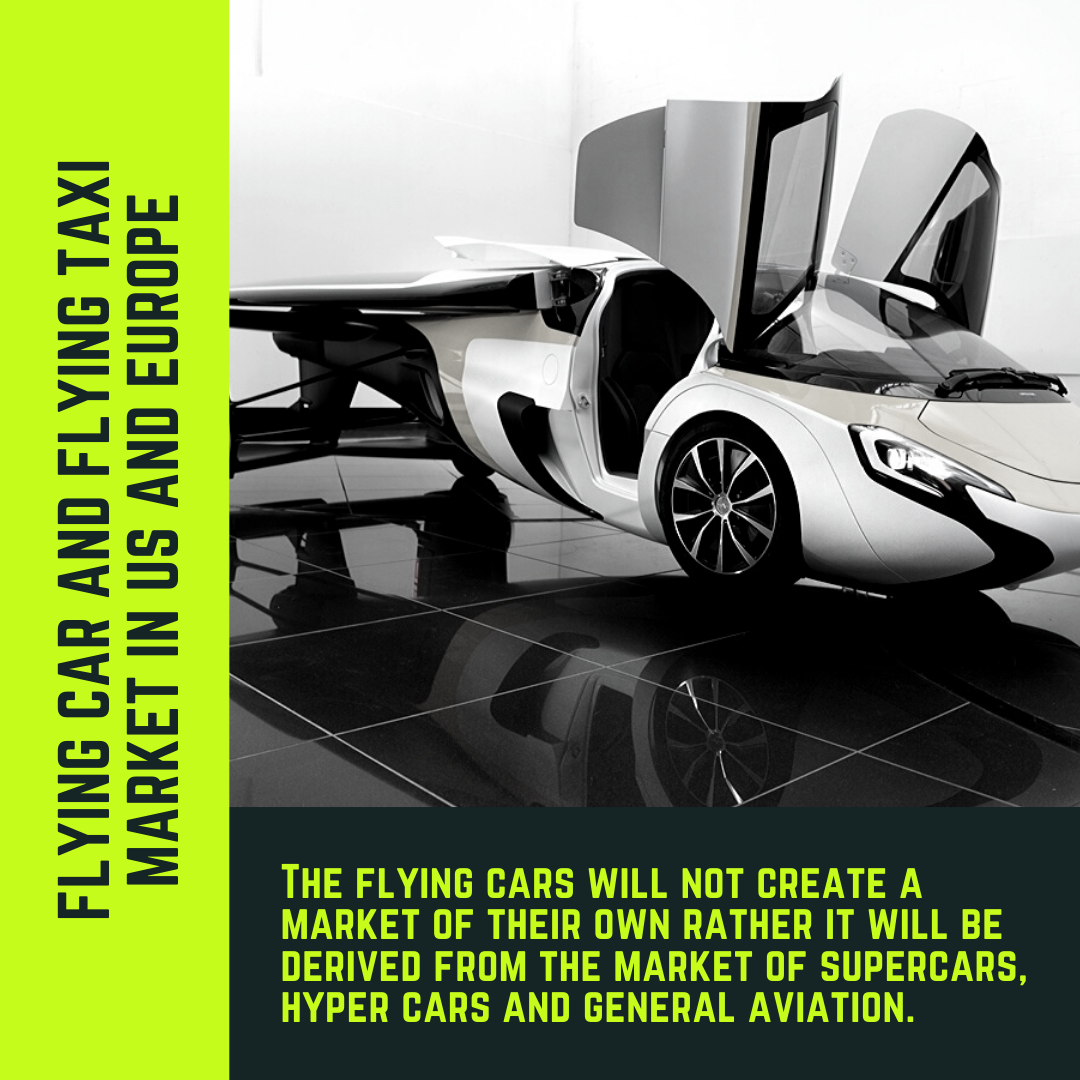 Although,improved digitization courtesy of smartphones has strengthened the cause of ride-hailing and car sharing services. But,it is still a long time away from what we call an effective long-term sustainable mobility solution. This has made innovative brains around the world to look to the sky to fight this growing and long-standing menace of what we call traffic. Whether it will bear any fruit or not, we will see further in the report.

The flying cars will not create a market of their own rather it will be derived from the market of supercars, hyper cars and general aviation. The cumulative annual volume of super cars and hyper cars is ~20,000 units per year,whereas general aviation volume is roughly 2,500 units per year. The minimum initial cost of flying cars will be in excess of $200,000, which can also exceed $1,000,000 as in the case of Aeromobil.

The higher initial cost could be attributed to the manufacturer recovering cost for R&D, certification ,production tooling and raw materials. The higher price will have a negative impact on sales, limiting the initial market to individuals or organizations with deep pockets.

HOW DID THE IDEA OF FLYING TAXI MARKET HAPPEN?

The on demand flying taxis would enable commuters to travel at a much faster pace they currently do in a car. In our opinion, initially the commuters who travel approximately 100kms a day (round trip) in urban traffic to reach their workplace are likely to be the first set of consumers. They could be willing to take a chance with this novel mobility concept.

The commuters who would opt for an on demand flying taxi instead of their personal car. Even, an on-demand taxi will save a significant amount of time, which would otherwise be spent in  traffic. But, this cannot happen without active participation of other important stakeholders i.e  government and infrastructure developers. The government bodies in US and Europe will need to emulate Dubai RTA on their policy of promoting intelligent transportation.

There is no denying the fact that there are several challenges to on demand flying taxi business model. But, on the other side the flying taxis also hold the potential to literally revolutionize the urban transportation. In the same manner, where on demand taxis have become a commonplace in urban environment.

THE INITIATIVES TAKEN BY UBER AND OTHERS

Uber made headlines in Aug `18, when it announced that it will be launching flying taxi services in 5 countries. The shortlist, also included a surprise name, “India” where annual per capita income is less than $2,000.

It has collaborated with NASA and plans to launch its flying taxi services in Los Angeles by 2020.Even in flying taxi market, it will not own any aircrafts, and rather it will be just an aggregator and provide its network to support the same.

The flying taxi operators are yet to decide the actual cost per trip. But, we have put an estimated cost as per inputs gathered from our discussion with industry participants in the report.

With the growth in technology and disposable income, cars were thought of as the ultimate mobility solution. The automotive industry boomed for many years in the 20th century, resulting in clogged urban streets across the globe.

The higher the car population in a country, the more time their average commuters spend in traffic.This ultimately leads to loss of productive man hours, fuel and increased emissions. The traffic problem remains the same for a person whether travelling in an entry level car or the most luxurious car. This is where flying car and flying taxi have something more to offer. They can provide door to door transportation without worrying about the traffic problem.

But, here lies the biggest challenge.The new regulations from the International Civil Aviation Organization (ICAO) asserting that a 2/4 seater flying taxi has to be as safe as a commercial aircraft carrying >100 passengers, will be further increase development and certifcation costs for more than 100 startups active in the flying taxi market.

Dubai is embracing the idea of autonomous vehicles faster than the even the US and Europe. It has plans to make 25% of its public transport autonomous by 2030 and is following its target very keenly. In both the cases,US or Europe will provide the requisite technology and manpower.

US and Europe has a sizable chunk of rich and early adopter population. It also accounts for 60% of global light aircraft market.

Although Asia`s share has been growing of late along with Latin America, it’s nowhere close to that of these matured economies. This is one of the major reasons why flying car and flying taxi manufacturers are targeting this region. Up until this point, the possibility of an individual flying machine has been constrained to small aircraft and helicopters. Both have a high procurement and maintenance cost, accordingly restricting its ownership to a chosen few. 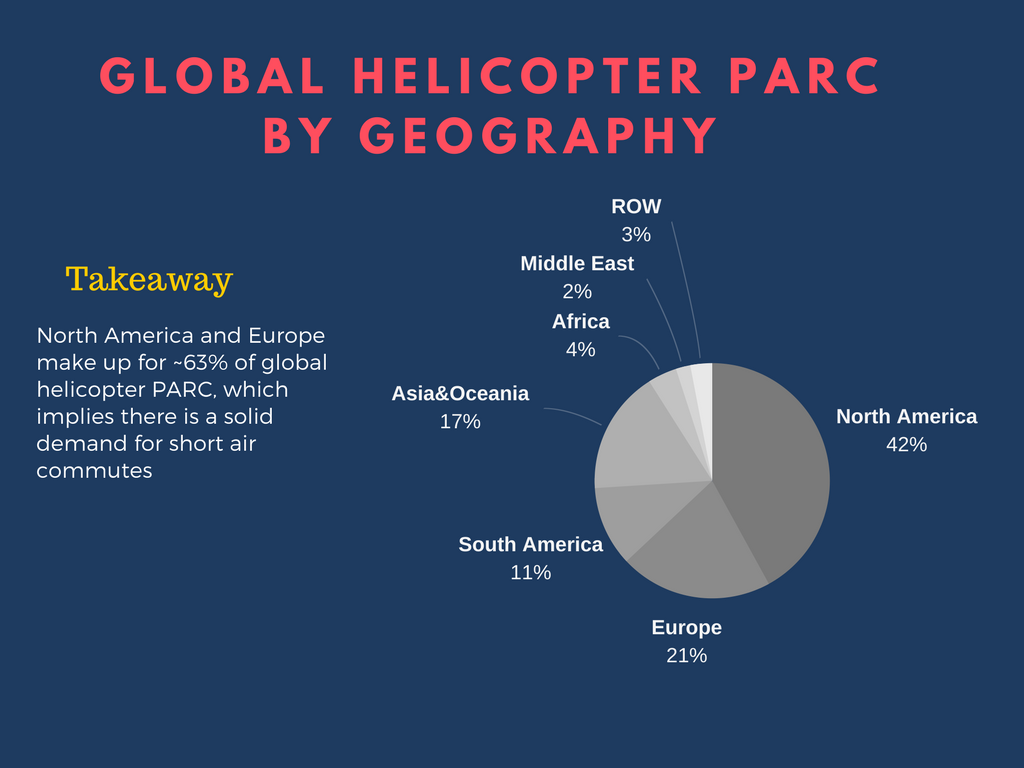 Helicopters have long been the favorite mode of air transportation of HNWIs and military due to their versatility in operation. Therefore, if the concept of flying car has to be successful, then its acceptance has to go beyond that of a helicopter and lighter compact aircraft.

If we compare flying taxi market to other on demand mobility solutions like bike and scooter sharing market. The scale was easily achieved because of the lower cost of bikes and scooters. For instance, to buy 1,000 pedal bicycles in US it would cost ~$0.5 M and it will serve at least 5,000 people per day with minimal operating costs. Compare this with minimum $0.4M-$0.6M per electric aircraft price, which can seat just two. Add $200-$300 per hour pilot`s cost and high cost of vertiport development, we are looking at a very expensive new mobility concept. 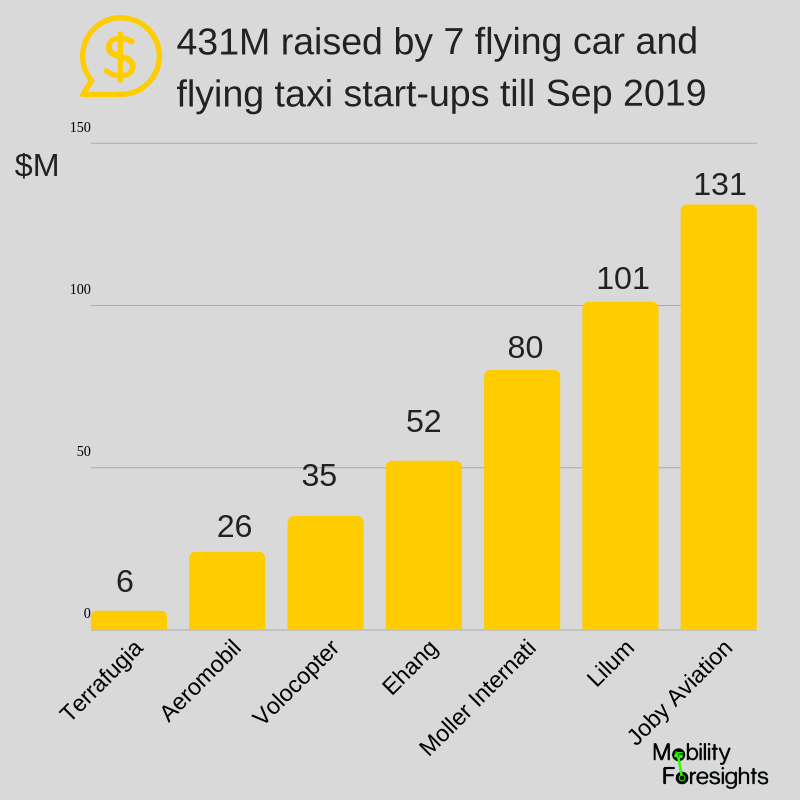