From light gun accessory for Magnavox (Brown Box), Xbox to Xbox Series X, PlayStation to PlayStation 5, and SEGA SG-1000 to SEGA Advanced Pico Beena, the main rivals in the gaming market have evolved drastically with the advancement in technology. 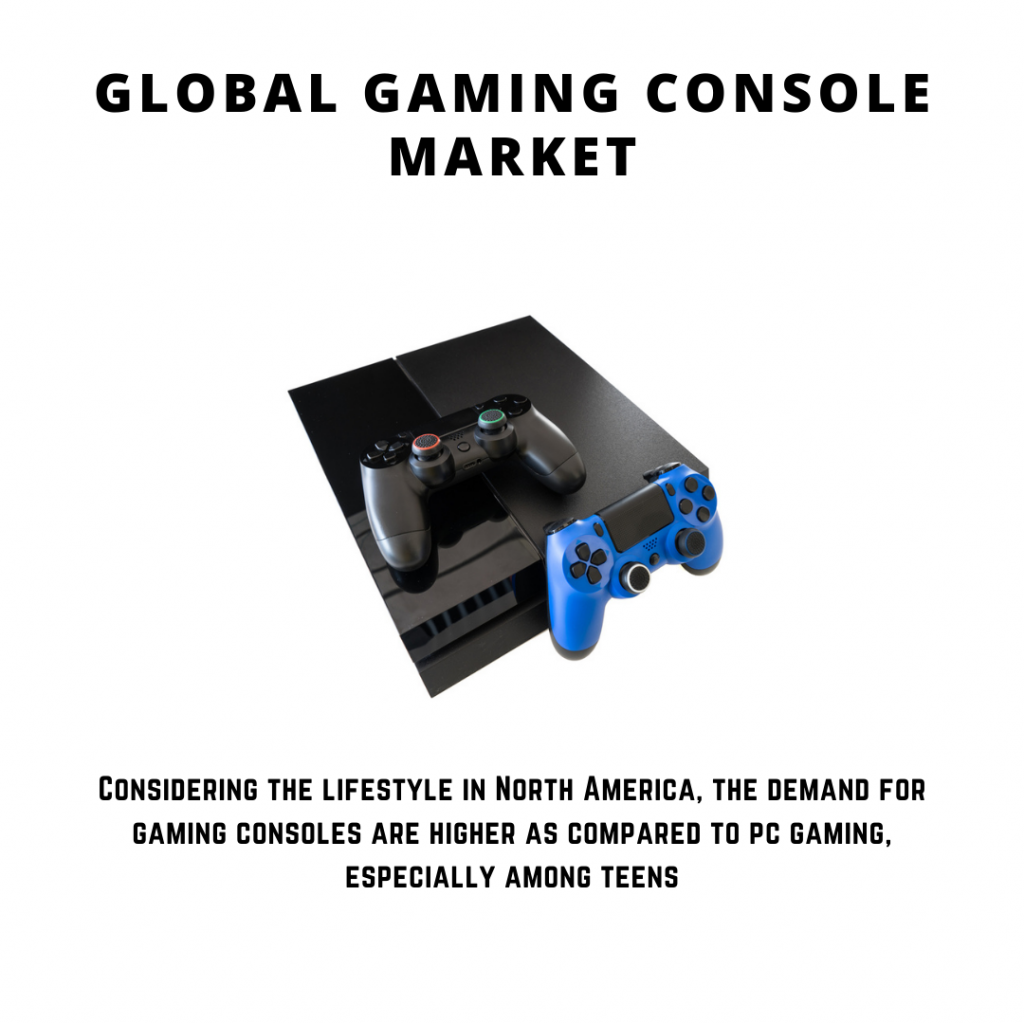 The evolution of the gaming community also pushed the growth of the market, ranging from Super Mario to Far Cry 6 and Watch Dogs (legion).

As the gaming community grew, Tv Gaming consoles were considered as the next level of gaming. They gained much popularity which resulted in 91.9% of the gaming consoles being TV based. While the gaming market produced products with enhanced features for hardcore gamers, they initiated the production of gaming suitable for casual gamers as well.

Eventually, on extension and evolution of the gaming market globally, North America and Europe gained the highest popularity for gaming console. Considering the lifestyle in North America, the demand for gaming consoles are higher as compared to pc gaming, especially among teens. As a result, this encourages vendors and game developers to develop and introduce more games.

The global gaming console market is estimated at $XX Billion in 2020 growing at –% CAGR till 2025.

The sales unit count of Sony’s PlayStation was almost double as that of Xbox One and almost two million units more than Nintendo.

The two main key factors that are responsible for the massive growth of gaming consoles are online gaming and high performance.

Grand Theft Auto 5 is a true valid game that pushed the sales of gaming consoles like PlayStation 4 and Xbox One, because after the release of their “Online Version” for the game, the demand for TV gaming consoles doubled. Advertisement plays a huge role in creating awareness for gaming products.

When Xbox released a video for Xbox 360 in 2011 with the title “Xbox 360 Kinect”, it widely received attention from the consumers. They used the caption “No Controller Required” at the starting of the video which created huge anticipation and excitement among consumers.

Gaming with consoles in 2020 is more like a real-life experience with superfine quality in terms of both video and audio by the application of Augmented Reality and Virtual Reality.

Even though its rival Xbox Series X shares similar specifications, Sony’s PlayStation 5 has more sheer power processing compared to Xbox Series X. This advantage can result in a lead even though they share the same price in the market.

The three main vendors in the gaming console market are Microsoft, Nintendo, and Sony. Product features, latest game release, and the price are the main areas where the vendors compete on.

Since there are a large number of gamers who play a vital role in influencing the gaming market, each model is released with new features every five to six years.

One of the most successful products in terms of performance and sales unit was “Nintendo Switch” introduced by Nintendo. It was released during early 2017 and it gained much popularity between casual gamers who prefer to game with handheld consoles.

New updates, changes, and the addition of new features are always appreciated as they enhance the growth of the market. The audio and video experience for a user has improved each time with the release of a new product in the market.