In-wheel motors are mounted on those components of a vehicle which take the most amount of abuse in everyday condition, “the wheels”. The use of in-wheel motors in an EV can provide a lot of flexibility to vehicle designers, allowing reduced weight and improved acceleration. It also means, designers can devise new crash structure architecture with proportionally distributed weight. Unlike today, where most of the FWD (Front wheel Drive) passenger cars have a 60:40 front- rear weight distribution.

Putting an in-wheel motor can simplify the mechanics, provide more space for passengers and cargo, and precise steering output. But, this improvement also eliminates multiple driveline components like transmission, full- length driveshaft and differential. This is a very grave issue for conventional auto component suppliers who have sold mechanical driveline components and sub-components for multiple decades. 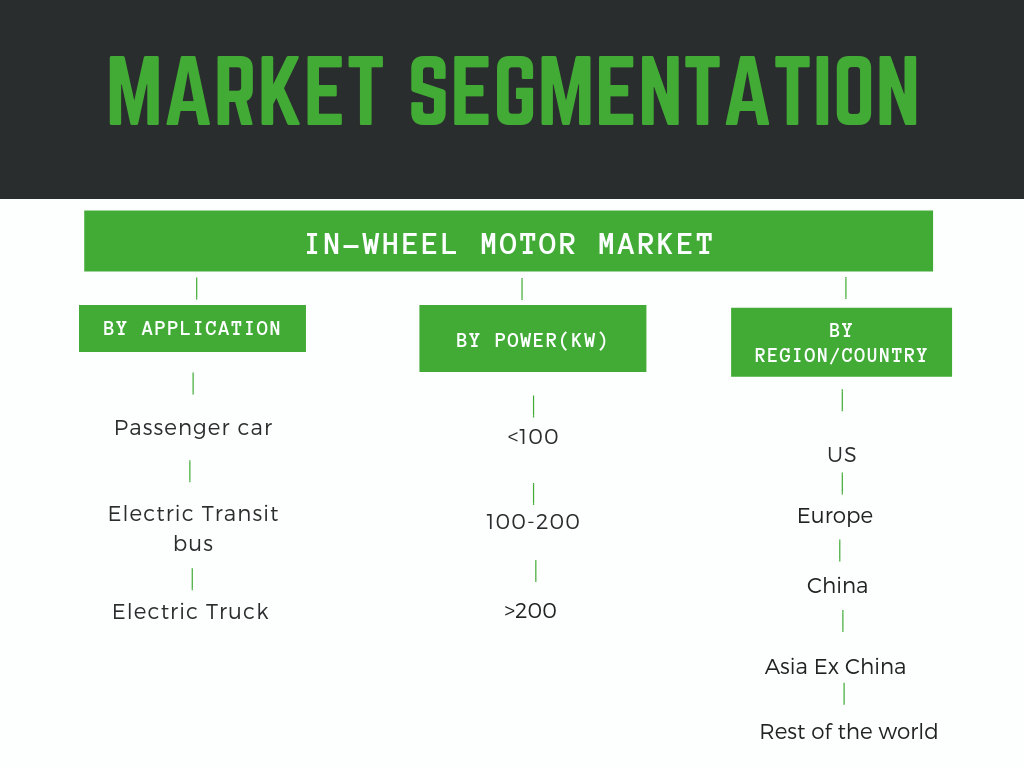 Every car OEM wants to deliver a superior and reliable product to its customers. There is unanimous thought among OEMs, that a centralized or even front and rear axle mounted power train is a better alternative than in-wheel motor option. But, none of them have ruled out this technology. They believe, in-wheel motor technology can be truly beneficial in L3 and L4 automated vehicles. Most of them want to see how it plays out for the other. So, far we have seen in-wheel motor in concept vehicles but many of those vehicles don`t make it to production.

Many reports claim that the market growth of in-wheel motor market will be proportional to electric vehicle growth. Our research contradicts that and we don`t find any substance in that claim.Our reasoning behind that is, there were about ~1.2 Million passenger BEVs sold globally in 2018 and not a single EV model had an in-wheel motor powering the wheels. China accounts for 50% of global EV demand and the top 10 best-selling EVs in China are low speed vehicles belonging to Chinese brands. They cater to budget segment and cost less than $15K. Putting an in-wheel motor in low speed vehicles is just not feasible due to incremental cost and complexities involved.

Is anyone using in-wheel motor yet?

BYD is extensively using this technology in all its electric buses.

In US and Europe the best selling BEV is Nissan leaf and Renault ZOE respectively. The architecture belongs to Renault Nissan Group and is shared among them,it has just one single motor. Other best sellers in Europe include Volkswagen E-Golf , BMW i3 and Tesla Model S. Apart from Tesla Model S which has dual motors, rest all have just one electric motor. Among plug in-hybrids ,almost all have just one electric motor.

The first in-wheel motors will make its debut in China in an EV startup and Protean Electric will be the first supplier. Now, the question is why is there a buzz about in-wheel motors?

We believe, now that in-wheel motors are being used in many electric buses, it could be followed by performance oriented EVs and later on in L3 ,L4 automated vehicles. They will be a part of  the high -priced niche electric vehicle segment where lower weight and brisk acceleration makes a significant amount of difference to their buyers. The M division of BMW, RS of Audi, AMG of Mercedes and N of Hyundai could be the early adopters in terms of testing this technology.Otherwise, it will be just a few startups from China.

A few suppliers have put their in-wheel motors in popular vehicles and carried out comparison test to showcase the capability of in-wheel motors. But, will that be enough to convince the automakers? Read our analysis on in-wheel motor market to find out.

To enquire about this report  or request  customization, CLICK HERE