LNG, or liquefied natural gas, is a clear, odourless, non corrosive, nontoxic liquid that is formed when natural gas is cooled to around -260 F. This shrinks the volume by about 600 times, making the resource easier to store and transport through marine shipments. LNG is not stored under pressure and is not explosive or flammable in its liquid state, and it cannot be released rapidly enough to cause overpressures associated with explosions.

Natural gas is one of the world’s most important sources of energy. Today, approximately 30% of the world’s energy needs are met with this gas. Most of it is supplied in gaseous form by pipeline. However, over the past two decades, Liquefied Petroleum Gas (LPG), Natural Gas Liquids (NGL) and Liquefied Natural Gas (LNG) have become much more important in the world’s energy market. Natural gas and LNG in particular are expected to play an essential role in the world’s transition to cleaner sources of energy. 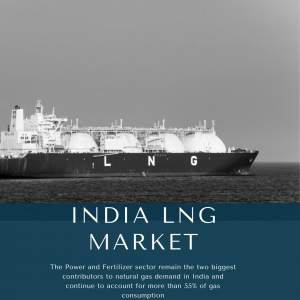 There are hundreds of processes for liquefying natural gas, but very few are actually in use. Most of the processes in use are not patented, with mostly new processes being patented. The most used processes for liquefaction are processes developed by Air Products and Chemical Inc., ConocoPhillips, and Linde, each of which has a capacity between two and eight MTPA.

In recent years, the demand for liquefied natural gas in India has increased significantly due to its higher availability, development of transmission and distribution infrastructure, the savings from the usage of natural gas in place of alternate fuels, the environment friendly characteristics of natural gas as a fuel and the overall favourable economics of supplying gas at reasonable prices to end consumers.

The Power and Fertilizer sector remain the two biggest contributors to natural gas demand in India and continue to account for more than 55% of gas consumption. India can be divided into six major regional natural gas markets namely Northern, Western, Central, Southern, Eastern and North-Eastern market, out of which the Western and Northern markets currently have the highest consumption due to better pipeline connectivity.

Because India’s natural gas demand has outstripped its production for several years, the country is expected to increasingly rely on LNG imports and build on its natural gas import infrastructure. Today, the natural gas sector is at the threshold of rapid growth in India supported by ever increasing demand for natural gas in the country, increased exploration efforts under NELP, commissioning of the LNG import terminals in the West Coast, projected upcoming LNG terminals and the Government’s initiatives in the direction of development of a nationwide natural gas pipeline grid.

Overall the Liquified Natural gas sector in India has shown modest growth in the past. Substantial investment in infrastructure relating to import of LNG and transportation of domestic gas across India is planned for the next 5-6 years. The current planned investments along with incremental investments in future would be sufficient to meet the growing demand for gas from various consumers segments.

LNG Traction based Fuel is being enhanced and implemented within the Railways segment of operation in the near future within the India operations. LNG offers a state of the art, yet financially viable solution as far as diesel traction is concerned. LNG not only has higher calorific value per unit weight compared to high-speed diesel, it is also cheaper per unit energy.

The India LNG market can be segmented into following categories for further analysis.

LNG has been underutilized in the country due to decreased levels of LNG Exploration and extraction methodologies wherein the unpatented and low efficiency-based methods are used as part of further establishment and refining of natural gas within the country. Alongside these, there has been an increased level of safety norms deviation noticed within the procedural establishments.

India has a total of four operational LNG terminals in Dahej, Hazira, Kochi, and Dabhol, with regasification capacity of 25 million TPY but currently running at 58%. A lack of supporting infrastructure,15 subdued R-LNG demand as a result of higher prices, and minimal pipeline connectivity between terminals and demand centres account for the low-capacity utilization.

The three main technologies which are being used within the country for LNG consumption and efficiency as part of integration within the large engines includes the Spark Ignition ,Port-Injection Dual Fuel and Late Cycle High Pressure Direct Injection in the order of increasing complexity and costs.

The Recent heat exchangers which are used within the liquefaction technology for processing and refining the LNG component includes the Spiral Wound Heat exchangers. These heat exchangers have a broad temperature and pressure range and are used in single phase and two-phase applications. They are able to handle many streams depending on the customers’ needs. Pressures of up to 3625 psi can be handled sufficiently. The materials of construction of this exchanger include austenitic steels, aluminium alloys, carbon steel, nickel, and chrome/moly alloys.

GAIL and IOCL are part of the pipeline connectivity programme which is being continuously implemented within the country that helps in inter state pipelines facility.  Some heavy-duty vehicle fleets are moving to LNG as their fuel of choice.

LNG allows more energy to be stored onboard a vehicle in a smaller volume. Using LNG and natural gas to fuel vehicles reduces greenhouse gas emissions by 30-40% and also saves vehicle maintenance costs. The further development of LNG infrastructure is vital if LNG is to fulfil growing demand and complement domestic production. As in most parts of the world, gas reserves and natural gas consumers are geographically separated.

The Port of Mundra in Gujarat is owned jointly by Gujarat State Petroleum Corporation (GSPC) and an Indian conglomerate, the Adani Group. The Indian Oil Corporation also owns a terminal at Enmore, near Chennai on India’s east coast. There are some major regasification terminals being constructed at all levels within the construction capabilities.

There has been increased levels of CGD and PNG networks being planned at various levels within the country by IOAG i.e. Indian Oil Adani Gas Limited alongside the contribution from GAIL Indian Limited. This has increased the capability of the country to enhance its piping of LNG to various states and other nations as well.