The rapidly growing ~$2.5B market for marine electric vehicles is unusually varied. It includes on-water and underwater electric vehicles for inland waterways and the sea. Military electric craft dominate in market value today. 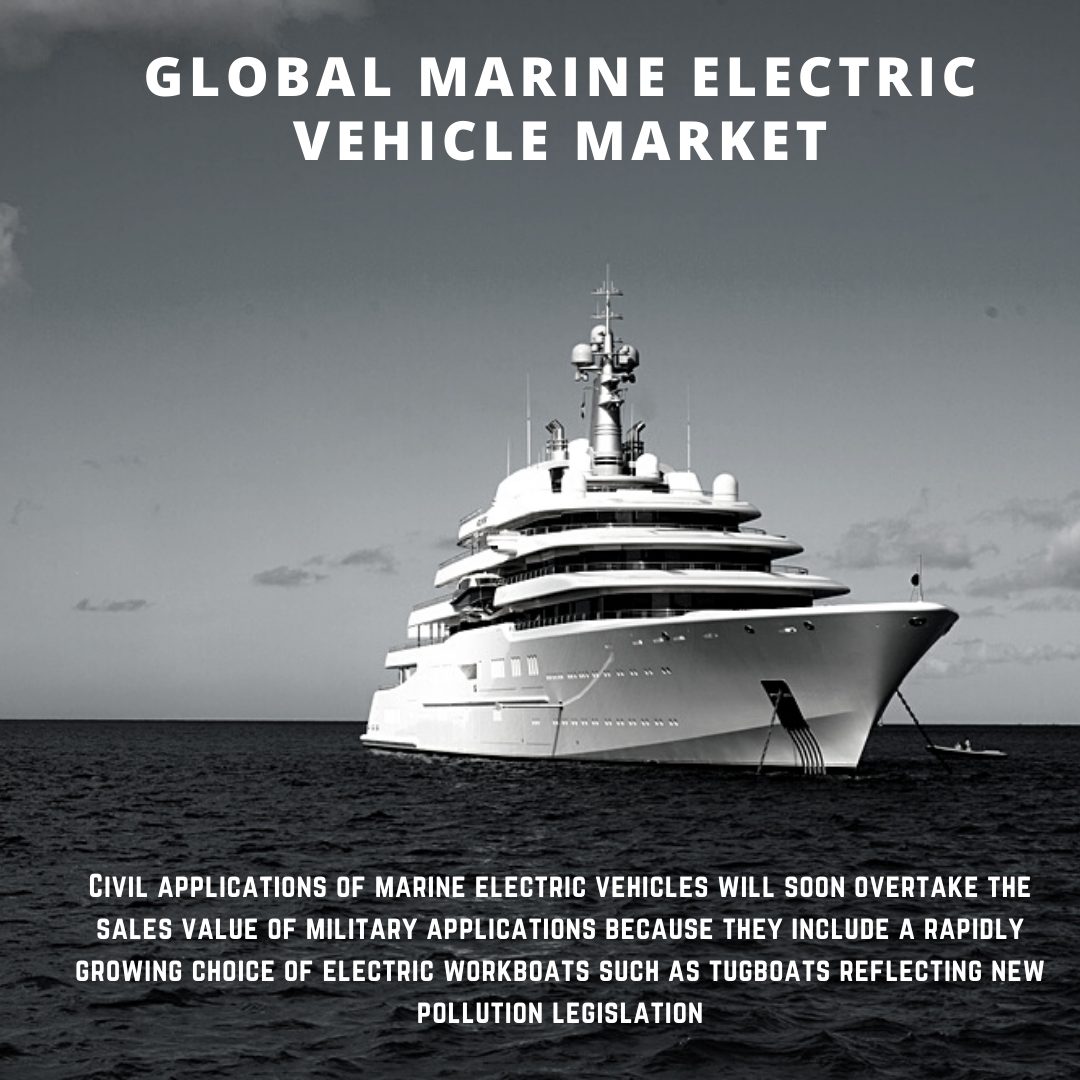 Certain marine electric craft are ahead of land and air electric vehicles in variously using lithium-ion traction batteries with greatest energy storage, the latest CIGS flexible solar cells for charging traction batteries (predecessor of multilayer smart skin explained in the text) and in being deployed for years at a time without human intervention.

Marine EVs are of great interest to those making components, systems and powertrains for land and air electric vehicles as well as specialists.

Electrically propelled ordnance and tethered vehicles are omitted within this category and as are the conventional large military ships and submarines with diesel electric and nuclear electric powertrains. Typically these are not called electric vehicles just as large diesel-electric land locomotives are not referred to in this way either.

Civil applications of marine electric vehicles will soon overtake the sales value of military applications because they include a rapidly growing choice of electric workboats such as tugboats reflecting new pollution legislation.

They also include inland waterway boats for up to 150 people, often solar powered, since internal combustion engines are increasingly banned in such locations, Taiwan being the latest country to introduce such laws. Indeed, there is now a rapidly expanding range of electric personal and public leisure craft for both inland and seagoing use. This reflects both user pull and legal push.

The maritime industry, among all other industries, is being forced to gradually reduce its emissions. Legislation is one of the tools applying this pressure, and since 1 January 2020, it focuses on the reduction of sulphur percentage in the heavy fuel oil (HFO)-powered vessels to 0.5%. This has been the first move towards prioritised improvements within the Marine Electric Vehicles in the Maritime Focus.

The aim for many regulatory authorities and organisations around the world is for alternative fuels and technologies such as solar and wind to be implemented, too. Such technologies, when combined with the advantages of digitalization and automation, can further reduce emissions toward zero-emission vessels (ZEVs) through integrated systems.

Contributions from shipping to ambient NO2 levels range between 7–24%, with the highest values being recorded in the Netherlands and Denmark. As far as the alternative fuels are concerned, biofuels, hydrogen, liquefied natural gas (LNG), liquefied petroleum gas (LPG), and methanol are among the most representative.

Ship engine manufacturers have started producing dual-fuel gas engines to allow the use of both natural gas and conventional fuels. In terms of new technologies, batteries, fuel cells, and wind-assisted propulsion are being strongly considered.

Another estimation is that in 2007, CO2 emissions from 45,620 vessels amounted to 943 million tons, with the total fuel oil consumption (FOC) being 297 million tons. IMO’s Marine Environment Protection Committee (MEPC) in 2016 estimates that by not reducing the SOx limit for ships from 2020, the air pollution from ships would contribute to more than 570,000 additional premature deaths worldwide between 2020–2025

The Market of Marine Electric Vehicle Market can be segmented into following categories for further analysis.

Due to the escalating demand for shipping and rising environmental concerns, there is an increase in the need for low and zero-emission vessels (ZEVs). This, in confluence with the emerging trend of digitalization and automation and the depletion of fossil fuels, represents one of the key factors bolstering the growth of the marine EV market.

Although solar, wind, and green energy, in general, are among the first that come up when talking about emissions reduction, there are numerous other technologies reducing emissions and improving efficiency. Cutting down on emissions might be something relatively new; however, in such a competitive sector as that of shipping, the need for improved efficiency, less fuel consumption, and more self-sufficiency have always been there. Technologies that help achieve these targets also contribute to making ships more eco-friendly.

An exceptionally good example of such a technology is shaft generators (SG), which reduce the fuel consumption, and thus the emissions generated, for electricity production. In order for that technology to be understood by an audience not familiar with maritime technologies, a better understanding of a ship’s power system is required.

The idea of using solar energy to power ships is not new. There are numerous examples of research studies, experiments, and prototypes that managed to do this. Between these prototypes, there are ships that use solar energy as an auxiliary means of power in order to cover the electricity needs of the ship, along with other renewable sources, and even as the only power source. On the Auriga Leader, 328 solar panels were installed on its top, providing a maximum power output of 40 KW.

Wind was also used as a power source in other sectors, such as windmills. The problem is that the same logic has not been applied to modern cargo, ferry, carrier, etc. ships for decades. The Japan Machinery Development Association ( JAMDA ) had been involved with the development of rigid sails technology which could be retrofitted and was done as required within 12-14 Ships by JAMDA. However, rigid sails were not the only technology exploiting the wind power for a vessel’s propulsion. Another equally important technology was that of rotor sails, also known as Flettner sails.

The main difference within the newest developments within the Rigid Sails Technology is that this time, the sail is equipped with numerous sensors, which combined with an automated system give the sail the capability of turning to the specific angle, in order to provide the optimum propulsion force.

Electric shipping is not only implemented in Asia, but in the European Union (EU), too. One of the first all-electric ferries was launched in Sweden. To know more about the electric boat market, read our report  There is quite an interest in the city where these ferries were introduced. The Swedish city of Gothenburg is a great example of a low-emission city, trying to implement any new technology contributing to that goal, through the ElectriCity project. The ferry was expected to enter commercial service by the end of 2020.

In China the first electric cargo ship was launched in 2017 in Guangzhou, China. The vessel was 70.5 m in length and travels in the inland section of the Pearl River, covering a distance of around 80 km with a single charge. In battery capacity, this translates to 2.4 MWh and 2-h charging time. The batteries are made of lithium and able to provide power for transporting 2000 metric tons of goods.

The all-electric inland vessels are being built by a Dutch company. The initial plan was to start operation of the electric inland vessel in August 2018, but till date it has not commercialized. However, the plan includes five small and six large electric container badgers that are being built and will be used to travel between the Netherlands and Belgium. These vessels are not only all-electric, cutting emissions down to zero rates, but also autonomous.