Outboard engines owing to their superior power to weight ratio are the best power option for many boaters. They are the only engine family designed from scratch for marine use. Inboard or stern drive engines are fundamentally a tweaked version of car/ truck engines. They may not be appropriate for every application but offer tremendous value for money for most applications.

Outboard engines are not only space efficient( occupies unused space outside the sitting area of the boat) but also require less maintenance than gasoline/Diesel inboard engines.

In Q1-2021, Suzuki reported a decline in revenue from outboard motors by ~8% YOY to $200M, majority of decline stemmed from weaker European markets.

OXE Marine, Sweden based Diesel outboard engine manufacturer that its sales were impacted as orders were deferred due to COVID-19. It also said that it had built sufficient OXE200 series units during Q1 to meet its sales targets in Q2 and Q3 2020.It undertook cost saving activities to navigate the COVID-19 crisis, including a reduction in non-essential R&D, temporary salary reduction of senior executives and a short-term recruitment freeze.

In May 2020, Yanmar which has already invested in Getmyboat a leading on-demand boat rental market player strengthened its service by signing up more boat owners and operators to meet the new demand from local renters. It is anticipated that the demand for With the massive decline in travel and vacations in the coming months, staycations are expected to go up.

The  growing importance of >300hp segment can be sensed by the fact that Mercury Marine launched 400hp verado outboard in Feb 2019, after getting numerous requests for the same.

The marine outboard engine market has witnessed launch of Diesel outboard motors in past 3 years, ex Yanmar, OXE and now Cox marine being the most recent entrant(June 2019) with its $39,000 motor. Cox plans to manufacture 2,000 units of its new CXO300 outboard diesel engine in 2020 once it has the required approvals from the US’s EPA.

Diesel outboards are likely to appeal to a limited set of recreational buyers and most of them will be used in commercial application, as they have 3x service life , 50% higher fuel economy and longer maintenance interval as compared to gasoline motors.

At present, Lehr(manufacturing in China), West marine and Mercury are among the few manufacturers who are promoting propane powered outboards.

Asia accounts for a very small share of the overall marine outboard engine market. A large chunk of fishing boats still have low power Diesel engines with higher emissions due to cost issues and thus there is tremendous scope for this market to grow in the region. 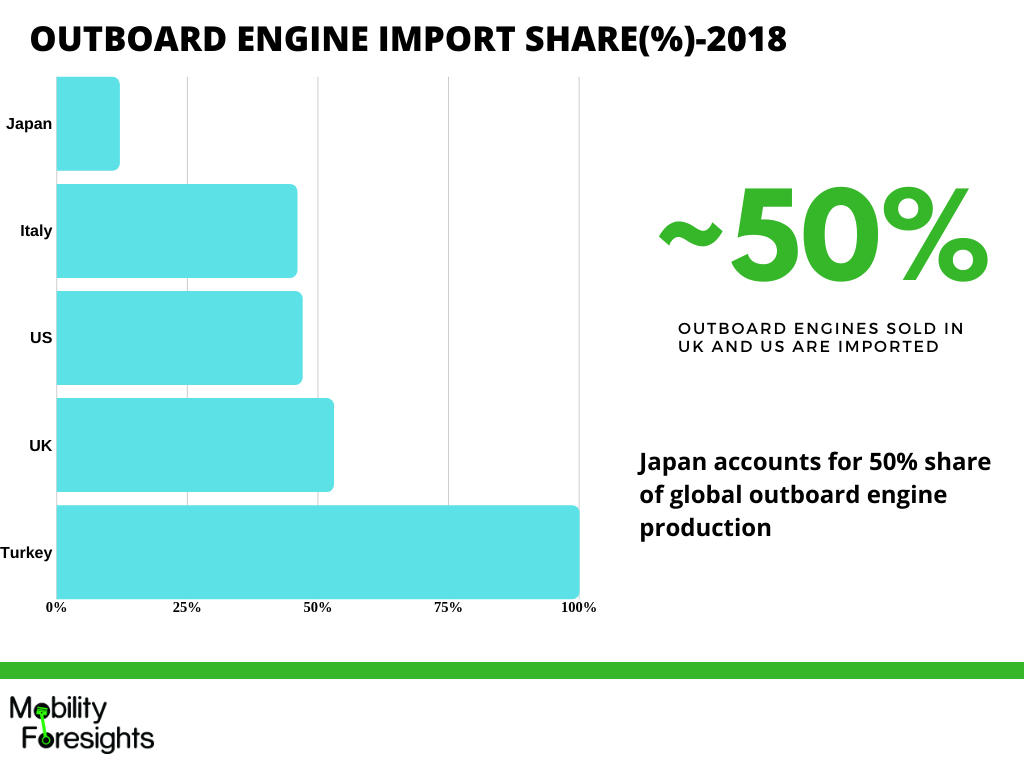 As electrification gathers steam in global automotive market it was just a matter of time before it hit marine outboard engine market.

Marine electric drive systems are a lot different from their gasoline/Diesel counterparts. They include batteries, charging technology, user interface, inverters and converters to supply hotel loads if required.

Torqeedo commercialized its electric outboard engines in 2005 and by April 2020, it had sold 100,000 units. The 100,000th unit- a 100kW system will power a 34M (111ft) Superyacht. The development of high-powered Deep Blue systems in 2013 proved to be a game changer and enabled marine electric mobility to larger yachts, workboats and even passenger ferries.

Flux Marine -A Boston based startup has so far raised $150k and is now developing its fourth prototype. The Flux team is in discussion with more investors to secure funding that will allow them to launch beta testing within six months.

The inroads made into electric outboard motors have been so impressive that the global market leader Yamaha is planning to start trials for its twin twin electric boat motor unit is integrated with a steering control system – HARMO from August 7 2020. Yamaha believes Europe with its thousands of kilometres of canals, will be the key market for the HARMO.

Yamaha is the global market leader with 40% market share and reported revenue of $2.6 Billion in Jan-Sep 2019 period, 4% up YOY.It has also said that sales of high margin 200hp outboard motors went up in US and well as Europe in 2019.

Suzuki generated ~$0.7 Billion in annual sales in FY 2020 from outboard motors and had a gross margin of ~20%. The gross margin improved by ~17% last year due to growth in higher margin DF350A outboards in North America.

In past 5 years there have been quite a few new entrants successfully operating in the market. China based outboard engine manufacturer Parsun is one such example. It has now even sold 60hp EFI engines to the United Nations after a detailed tender and selection process.China is fast becoming the hub of outboard engine production with ~10 brands with Parsun and Hidea being the leading companies.

Evinrude shook up the marine outboard engine market when it introduced its revolutionary two-stroke E-Tec G2 motors in 2014. It then expanded its product portfolio in 2019 and introduced 115hp, 140hp and 150hp versions, all based on a 1.9L in-line 3-cylinder direct injection engine. But, the sudden announcement to discontinue production of Evinrude E-TEC and E-TEC G2 outboard engines in May 2020 has shocked many in the marine industry.