Asia is the most densely populated region in the world and motorcycles are major source of commuting for more than 4 Billion population inhabiting in the region. It is also the most unsafe region for motorcycle riders as more than 73% of global motorcycle related deaths occurred in Asian countries in 2018. Exceeding the speed limit has been found to be the cause of more than 50% road accidents and thus Antilock-Braking system(ABS) has the potential to reduce road fatalities by a significant margin ,therefore we are seeing a renewed push for it by many governments.

India is now the biggest motorcycle market globally after China banned gasoline powered two wheelers in all big cities in 2014.In 2018, India produced and sold 20+ Million two wheelers as compared to just 15.5 Million by China.

Single channel ABS is getting prominence in the Asian market owing to high share of low cost 150cc bikes (priced at <$1,500) sold in the region. In the dual channel ABS segment, the growth in big bike(>400cc) manufacturing in Thailand due to ASEAN trade pact (lower single digit tariffs on import) is an important growth driver. 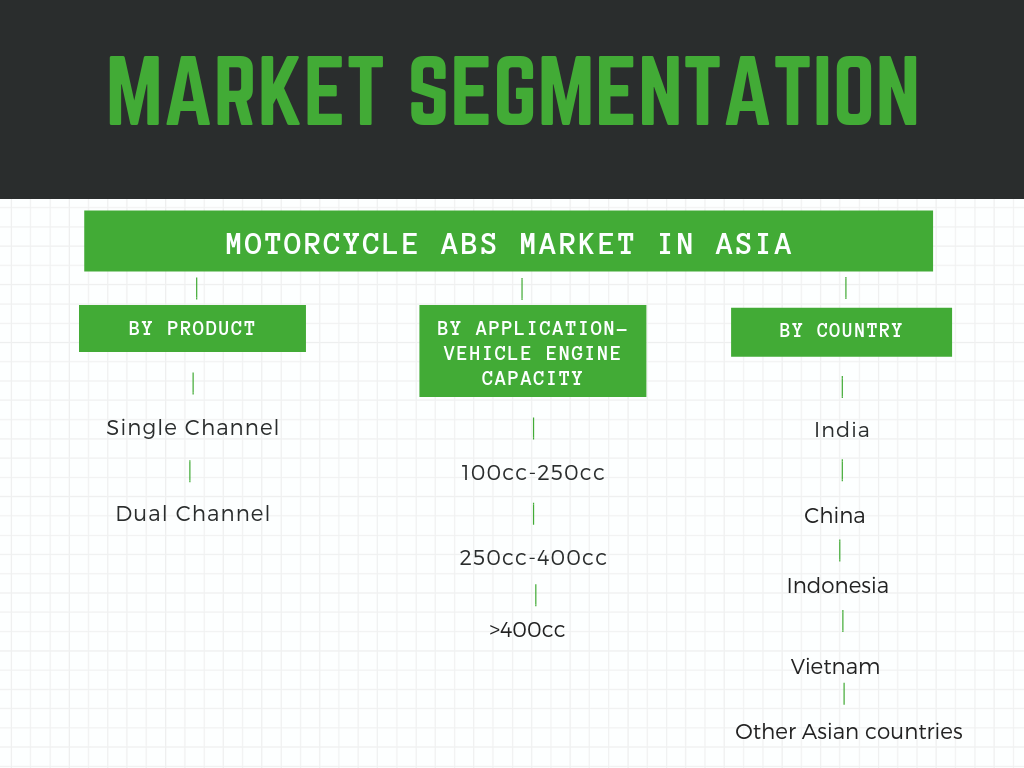 Honda,Hero,Yamaha, TVS and Bajaj are among the leading motorcycle manufacturers in Asia. Honda accounts for every third motorcycle sold in Asia and has more than 60% market share in ASEAN region.

Since two-wheelers in Asia are predominantly used for commuting to work and other intracity usage, the share of 50-125cc bikes in total sales is more than 85%. These vehicles either have dual drum brake setup or just a front disc with rear drum.

But off late things have been changing, as growth in income coupled with younger demography is fuelling demand for aspirational products. For example, the recent launch and success of KTM 125 in India implies that there is underlying demand for premium bikes in 125cc range. If KTM 125 succeeds in getting consistent volumes, we might see a few more premium 125cc models with single/dual channel ABS.

The motorcycle ABS market in Asia is estimated at XX Million units in 2019, growing at –% CAGR till 2023.

The motorcycle ABS market in Asia is fairly consolidated with less than 10 OEMs present in the market. Bosch, Continental and Nissin are among the market leaders, cumulatively accounting for more than 70% market share.

We expect many new entrants in the Indian motorcycle ABS market given high volumes and low cost requirement of domestic manufacturers.